HOMEWORTH, Ohio — From the time Jacob Baker was able to toddle, he would run to the barn, especially when he knew it was milking time.

“I held him off as long as I could,” said Kay Miller, Jacob’s grandmother. “But there came a point where there was no stopping him.”

Jacob’s mother Jennifer took the children to the milking parlor every chance she got and even sat a swing in the parlor so Jacob, and later his younger sister Madilynn, could be with her, doing what she loved.

Today, 10-year-old Jacob shuffles around the corner with a green John Deere hat atop his head, big blue eyes, a dimple on his right cheek and a smile that will light up any room.

He swings his crutches onto the back of the chair as he takes a seat at the dining room table, and immediately starts in about “Junior” not living there, but at the Casper Dairy Farm in Carroll County. He says Junior is in milk right now and the Bakers don’t have a parlor to be able to milk her. But her heifer calf, Jewels, is outside in the pasture. He talks nonstop about how he showed Jewels this year and is excited about next year.

Jacob grew up around the show circuit with his parents, Jennifer and Brent Baker. It’s what they did as a family in the summer. It’s even where his parents met. He couldn’t wait until he was old enough to show in 4-H.
And then his world changed.

When he walked junior into the ring at the Carroll County Fair, there wasn’t a dry eye in the barn. After all he had been through, there stood a little boy on crutches with his calf.” — Elizabeth Neider, Co-owner of Reiden Acres.

Three years ago, on Nov. 19, 2009, a Chevrolet pickup truck driven by Rikki Wheatley III, of Mechanicstown, crossed the center of Rochester Road in western Columbiana County and crashed into a car Jennifer Baker was driving. She was killed instantly.
Jacob was in the backseat with Madilynn, who suffered only minor injuries. Jacob was not so lucky.

From the accident scene, Jacob was taken to a Canton hospital, where he was evaluated, then rushed to Akron Children’s Hospital for surgery. He had a broken vertebrae, his spinal cord was bruised and a portion of his colon had to be removed.

The doctors explained to his dad, Brent, the spinal cord was bruised where it connects at the bottom of the back. It was stretched and probably would never heal.

The specialists said he would spend his life in a wheelchair. Jacob was not expected to walk again.

When Jacob woke up and heard his prognosis a few days after the accident, he asked for one thing — to show cattle. Somehow, some way.

“I wanted to show cows. I asked if I would be able to do that,” said Jacob.
He became dedicated to his goal of showing cattle, even if it meant doing it from a wheelchair.
“He had to find a purpose, I guess, and that became his motivation,” said his grandmother Kay.

Jacob remained hospitalized in Akron until the first week of December, and then moved to the Children’s Institute of Pittsburgh for intense rehabilitation.

He would stay in Pittsburgh through Christmas, getting to leave only for a few hours in January for his uncle’s wedding, and remained hospitalized all of February.

During those three months, both sides of the family — the Millers and Bakers — and Brent would take turns staying in Pittsburgh helping Jacob work at his rehabilitation and with school work.

In late February, the family got the good news: Jacob could go home in a wheelchair, but would have to continue rigorous physical therapy. He went back to school the week after coming home from the hospital.
Determined to walk again, he did specialized exercises every day and attended therapy three times a week for over a year. Eventually, Jacob gained some use of his legs and was able to walk with crutches. 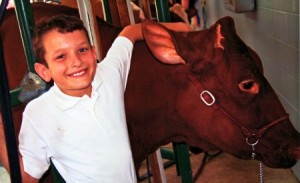 Brent decided that if showing cattle is what his son wanted, then that’s what he would do — show cattle. He put the word out he was looking for a cow for Jacob.

Jacob kept telling his dad, he wanted a solid red cow, but Brent told him he probably couldn’t be picky about color.
In nearby Carroll County, the Neider family heard Jacob was looking for a cow to show. They had two calves and called Brent to say Jacob could have his pick.

She will never forget when Jacob picked out the name for his calf.
“He was still in his wheelchair and the prognosis wasn’t good,” Neider said. “But there he was in the barn, looking at this calf.”
When she asked what he would like to name her, he didn’t think twice.
“Jacob replied ‘Junior’. I asked how he wanted it on the papers and he said ‘J-R’,” Neider said.
No one knows why, he just likes the name.

Jacob continued to work hard in physical therapy. By the summer of 2010, Jacob was using crutches and relying less and less on his wheelchair.
Then the shows began.
Jacob showed Junior at the Carroll County Fair in July and earned a blue ribbon.

“When he walked Junior into the ring at the Carroll County Fair, there wasn’t a dry eye in the barn,” said Neider. “After all he had been through, there stood a little boy on crutches with his calf.”

Then he went on to Portage and Columbiana County fairs that year, before hitting the Canfield Fair.

“I never know how Junior and I are going to do. And it’s always a surprise,” said Jacob. “I always tell her the same thing. ‘I know that either way, you are doing your best.’”

Taking the highest honors at each of the fairs. Jacob and Junior, or Redien Acres JR as she is registered, were nominated All-American in 2010 and 2011.

As Jacob and Junior stacked up the ribbons and honors, Brent said he kept telling Jacob not to get used to winning all the time. It might not be like that at all of the shows.

Jacob said he likes to show cattle because he is still limited by what he is able to do physically, three years after the accident.
“It’s something I can do. I can be competitive even with my crutches. I can’t play soccer, but I can show Junior.” 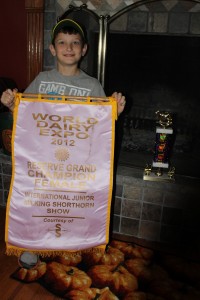 In March 2012, Junior gave birth to Jewels, and Jacob wondered if they could bring home ribbons as a cow instead of a heifer.

“She was a really good heifer, but she turned out to be a really, really good cow,” said Brent.

In the summer 2012, Junior showed at Columbiana County Fair and the Ohio State Fair and brought home first place in his class each time.

Then Jacob made a critical decision, because of the dry, hot weather, to take a break from the fair circuit.

At the young age of 10, he must have known something.
In October, Junior went on to the granddaddy of all dairy shows, the World Dairy Expo in Madison, Wis. Jacob couldn’t go, so Doug Rhodes, of Greenville, Ohio, showed her. Junior brought home first place in the junior and open junior two-year-old Milking Shorthorn class. In addition, she brought home the honor of the best udder in her class.

Today, life has a routine in the Baker household. Jacob still attends physical therapy regularly and continues to regain more mobility. But his limitations don’t stop him from toddling out to the barn every chance he gets, just as if his mom is by his side.