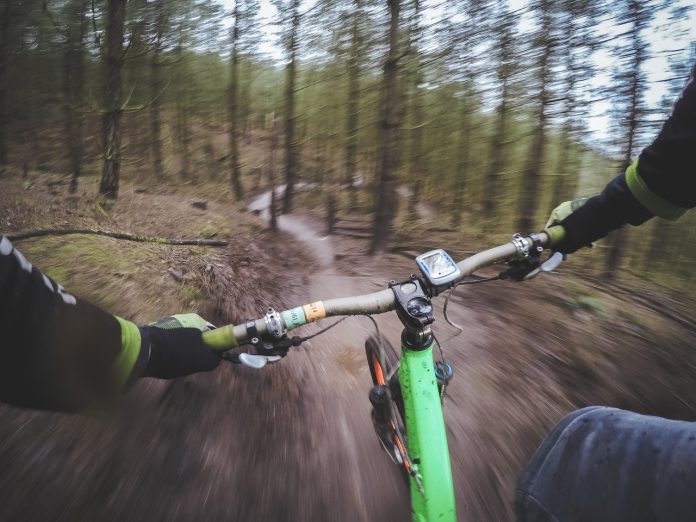 UNIVERSITY PARK, Pa. — Elliot Redding, a junior in landscape contracting, is taking full advantage of his time at Penn State to dig into the world of agriculture and find a career he is passionate about. From landscape competitions to networking to mountain biking, Redding is getting hands-on experience doing what he loves.

Redding’s interest in landscape contracting began with a job he held between high school and college with Boyer Nurseries and Orchards Inc., a small family-owned business in Biglerville, Pennsylvania. “Working for Boyer helped me realize that I really did want to go into horticulture as a career,” said Redding. He had the opportunity to work with a group of people who were always willing to answer his questions and help him learn about the industry. It also gave him a wide range of experiences including working with design plans, observing day-to-day operations and spending time in different parts of the company.

Redding began his higher education at Penn College in Williamsport, where he earned an associate degree in landscaping and horticulture. As one of the first students to transfer to the University from Penn College, Redding’s transition required a little more sorting out than most — but he wouldn’t have it any other way. “My time at Penn College gave me a lot of hands-on experience that set me ahead in my classes here at Penn State,” he explained.

In addition to Boyer, Redding has worked for Adams County Nursery in Aspers and Cumberland Valley Tree Service in Chambersburg and held an internship at Hively Landscaping in Dover. “I’ve chosen to work different places every summer to help me get a broader base of experience,” he said. “It would be more comfortable to stay in one place, but you miss out on learning new things and having the chance to do more networking.”

Working in different jobs also has helped Redding develop strong communication skills, which is an advantage when working on the design side of landscape contracting, he explained: “If you can talk with the clients and make your point clearly, then you’re one step ahead of a lot of people.”

For Redding, having the opportunity to try different things has been very important in shaping his future goals. His interest in agriculture led him to become an active member in the horticulture club and participate in the National Collegiate Landscape Competition, a nationwide competition between 50 to 70 colleges and universities that tests students on their design planning, management and building skills. “It’s a great experience,” Redding said. “It’s a good place to learn what I don’t know.”

Family also has played a role in Redding’s career choice. Agriculture, a love of the outdoors and a strong work ethic all run in the family. His father is a college alumnus active in the industry and both of his parents have backgrounds in extension and dairy. Redding’s uncle owns a masonry business, and the family recently moved onto Redding’s grandparents’ farm in Gettysburg.

This semester Redding was able to extend his love of the outdoors to his extracurricular activities by riding with the Penn State Cycling Club. He participated in races in Vermont, New Hampshire and northern Pennsylvania. In November, he won first place in the Men’s 19-29 division of the Raven Enduro race, a timed, five-stage race covering 22.1 miles.

The combination of family traditions and unique opportunities at Penn State has helped to shape Redding’s career prospects. “In my major, and in horticulture overall, there are so many opportunities. There are jobs involving construction and installation, supervision and management, design and sales and more,” he noted.

Redding ultimately would like to work in design and sales within the landscape contracting industry. “Really, if you put in the effort, the possibilities are endless,” he said.