LOUISVILLE, Ohio —  An operation that got its start at the Ohio Beef Expo is continuing to prosper as a seedstock producer 20 years later.

Stark County cattleman Cliff Linder and his wife, Julie, started out with crossbred cattle 26 years ago, but decided they wanted something more. Their children were growing up and they knew they wanted them to show cattle.

They eventually traveled to the Ohio Beef Expo and purchased a few purebred Simmental heifers.

For Cliff, the choice of which breed to produce was the easy part. He knew it could only be Simmental for him, because he grew up raising them and knew the breed’s strengths. He said the fact that Simmentals are known for being good mothers, producing milk and being very docile contributed to the decision. 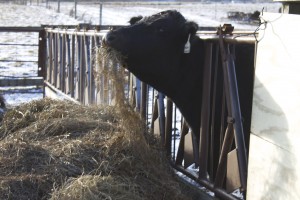 Both Cliff and Julie grew up on dairy farms, so farming was going to be a part of their lives and their children’s lives. They have three children — Michelle, 26, Dusty, 23, and Rachel, 20, who is still showing.

As the children showed in 4-H and gained experience, the family began showing in the American Simmental Association shows, including the state and national shows.

Cliff said the experiences gained showing cattle can’t be measured in monetary terms.
“We’ve been very blessed to be farmers,” said Linder. “Farming is more about learning and responsibility than anything.” 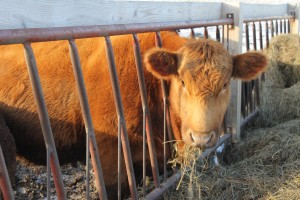 Both Julie and Cliff agreed the farm experience helped their children become the people they are today. The oldest two are registered nurses; Rachel is a sophomore at Ohio State University.

The Linders have held off-farm jobs as they built their cattle herd. Julie works in the office of the Hoover Company and Cliff works for Hartville Hardware.

Linder said winter is his favorite time of the year because of the calves. He loves to see what his cattle produce, and seeing the calves hit the ground. It pushes him to strive for even better genetics year after year, he added.

“I’m like a kid in a candy store,” said Linder.

The Linder farm not only produces purebred Simmental cattle but also Simmy-influence cattle, which means they are mostly Simmental. He said one of the hottest developing breeds is the Simmental-Angus cross cattle.

In addition, the Linders like what the Simmental breed brings to the cattle breeds in the United States. Linder said the American Simmental Association is continually trying to improve the breed is collecting data on docility, tenderness, meat flavor and the longevity of the cows in the herd, as well as yearling and weaning rates.

“This is will let buyers know what you have and the data is behind it,” said Linder.

The Linders use estrus synchronization in their herd in order to keep breeding to the winter months. In addition, to artificial insemination, the Linders use two cleanup bulls to ensure the heifers and cows are bred.

Linder said the breeding process makes the winter and early spring a busy time. The farm also flushes a couple of heifers and implants embryos in a few every year.
“It makes it a busy time of the year, trying to get everything done in time so that haymaking can begin,” said Linder.

The Linders grow their own hay, make silage bales and produce corn fodder for bedding.

Herd health-wise, the Linders worm and vaccinate, and feed a mineral program throughout the year.

“Minerals are one of the most crucial things to get them through their cycles,” said Linder, adding that he doesn’t use hormones in his herd.

“We don’t use hormone shots. If you have good genetics, you don’t need them,” said Linder.

Always trying to do better

While it means something for a producer to do well in the show ring, Linder said it’s especially gratifying when it is stock that has been bred and raised on the farm. 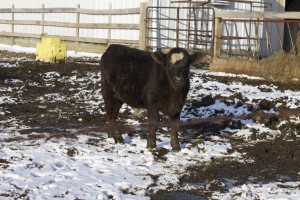 In addition, Linder prides himself on drawing repeat buyers. The Linders’ cattle have been sold to ranches in South Dakota and to farms in New York and Pennsylvania.

“It means something to be a producer and have buyers come back. It says something about the herd,” said Linder.

But Linder also emphasized how important it is for farmers to tell their story to those not involved in the farming industry and to work together as farmers.

The family manages to give back to the agriculture community as well. They give a calf away every year to a 4-H participant in Stark County. Linder said it is their hope that a 4-H member who normally couldn’t afford a steer gets the jump they need to be successful in agriculture.

He said he knows the work ethic the cattle business has taught his children and he hopes that with the donation of a steer to another 4-H member, the cycle will continue.

To find out more about this year’s Ohio Beef Expo, check out an interview with OCA Elizabeth Harsh as she details this year’s event.