BERLIN, Ohio — When people drive through the rural communities of Holmes County, Ohio, they typically notice the farms, the Amish, the tourist shops, and the restaurants.

But, there’s another cluster of activity that’s growing and maturing, and it’s taking place out in the woods — inside nearly one-third of the county that is forested, and inside hundreds of sawmills and wood shops, retail and manufacturing centers.

That cluster, in its broadest form, is the lumber and timber industry. And in it’s narrowest form, it’s the three main products made from timber: lumber, furniture and wood pulp.

Across Ohio, 8.147 million acres are under forest cover, which is about 31 percent of the state. More than 86 percent is privately owned.

In Holmes County, more than 91,100 acres were forested as of 2012, or about 34 percent of the county, and nearly all of that forestland is privately owned.

By the numbers: Check out our infographic on the economic impact of Ohio’s forestry industry.

Across Ohio, the forestry industry contributed an estimated $22.05 billion to the state’s economy in 2010, employing 118,000 full-time and part-time workers.

In Holmes County, the industry provides more than $420 million annually in industrial output, and an additional $24.7 million in taxes. More than 3,000 people work in the forestry industry in Holmes County.

The county has between 450 and 500 individual wood shops, including many small shops operated by Amish owners. They make everything from construction-grade lumber to building components, furniture and chipped wood products.

“I don’t think it can be over-estimated what the wood industry means to our (county),” said Shasta Mast, executive director of the Holmes County Chamber of Commerce. “It’s incredibly important to the economy of Holmes County.”

The area is believed to be the largest cluster of hardwood furniture makers and retailers in the nation.

“We have more available timber today than what we would of had in 1910, all because of select (harvesting) and the management of it,” said Ernest Hershberger, who owns the Homestead Furniture retail store in Mount Hope. 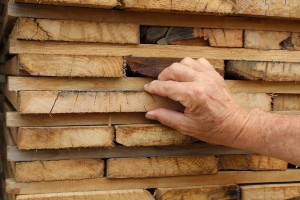 In other words, Ohio forests are growing more than two times the volume of timber being harvested.

Hershberger, who has been in the retail furniture and manufacturing business since the early 1990s, said many customers are surprised to learn Ohio’s forestry numbers are growing, especially customers from the West Coast, where hardwoods are scarce.

“They almost don’t believe it,” he said.

Hershberger is currently expanding and doubling his manufacturing plant to keep up, adding an additional 24,000 square feet. His company produces high-end custom furniture for the retail and commercial markets.

He is one of several hundred “secondary use” facilities in Holmes County, meaning he makes end-use products for the consumer market.

A few miles south, in the town of Berlin, is Yoder Lumber, a diverse company that handles timber harvesting, processing and business-to-business manufacturing.

Mel Yoder, CEO, has been with the company 50 years and today helps oversee a workforce of about 190. The company operates its own timber harvesting crew, and contracts with three additional harvest crews. They do most of their harvesting within a 100-mile radius of Holmes County.

Yoder figures about  60-65 percent of his lumber goes into furniture, and the rest into home construction and flooring.
Good management. Like Hershberger, he said the timber supply is going up, and it’s all because landowners are doing a better job of management.

Part of good management is recognizing when trees need to come down.

“Some people fall in love with their trees,” Yoder said. “They grew up with them, so they don’t want to cut them, but we tell them it’s the same as if you had a crop of corn out in the field. If you let it get overripe and overage, it will fall down and be of no value at all.”

And when trees fall, they often take other trees with them or cause damage, including the spread of disease.

Yoder said people often want to know if he replants what he harvests, and he usually doesn’t. The reason is, he practices selective harvesting, and nature replants on her own.

“An oak tree drops an acorn in the ground and they’ll sprout and come back,” he said. “I tell them God provided the ideal tree planter: squirrels and chipmunks.”

In a year’s time, his company harvest about 8.5-9 million board feet of timber, and he also buys logs from other crews and some logs that landowners deliver on their own.

About 75 percent of what he harvests are red oak, white oak and poplar, in addition to cherry, hickory, maple and other species. The hardwoods are the highest value and most abundant species for most Holmes County timber harvesters.

Oak and hickory make up about 60 percent of the species in the county, followed by maple, beech and birch at 22 percent.

But Yoder said it’s important that loggers be able to harvest and market all species, because landowners expect a thorough job, no matter what kind of trees they have.

The logs that Yoder harvests are run through sawmills at one of two locations: either his Charm, Ohio, sawmill, or at the Buckhorn location south of Millersburg. From here, the wood can go many directions, depending on its condition and its best use.

If the wood is full of knots, it’s more likely to be used for pallets or construction. If it’s free of knots and of a good color, it’s likely to be used to make boards for the furniture industry, or interior housing components — such as wood floors, molding and stairs.

The least likely place anything will go is in the trash. That’s because today, the company uses all parts of the tree, including the bark for mulch, and the sawdust and scraps to fire the wood-fired drying kilns.

The kilns are used to dry the lumber and typically take the moisture level down to about 6-8 percent.

When the boards are dry, they’re ready to be used for manufacturing or construction. Depending on the use, they often require some additional millwork and conditioning.

Yoder Lumber handles this process inside its “dimension plant.” At this step, boards are cut to size, sanded and cut into smaller pieces to remove knots.

The knot-free pieces are then jointed together with glue, to form solid, knot-free boards that can be used as tabletops, or for stair-step parts.

Yoder Lumber doesn’t actually build furniture, but the boards and components that leave the plant are often shipped to local manufacturers and retailers, who will make their own furniture, stairway, install a hardwood floor, or whatever else they are building.

Because there are so many end-users of lumber in Holmes County — especially among furniture shops — about 125 have joined together to form a marketing group called the Hardwood Furniture Guild.

The group is administered by Mast and the Holmes County Chamber of Commerce, and helps to link furniture builders with buyers.

The guild’s website, www.hardwoodfurnitureguild.com, allows buyers to search for builders by name, but also by the type of furniture they want.

* * *
Next week, part II will focus on items that are made once the timber is harvested.

(Some data from the Ohio State University Extension forestry fact sheets, 2012; the U.S. Department of Agriculture Forest Service; and a scholarly report for the U.S. Endowment for Forestry and Communities)