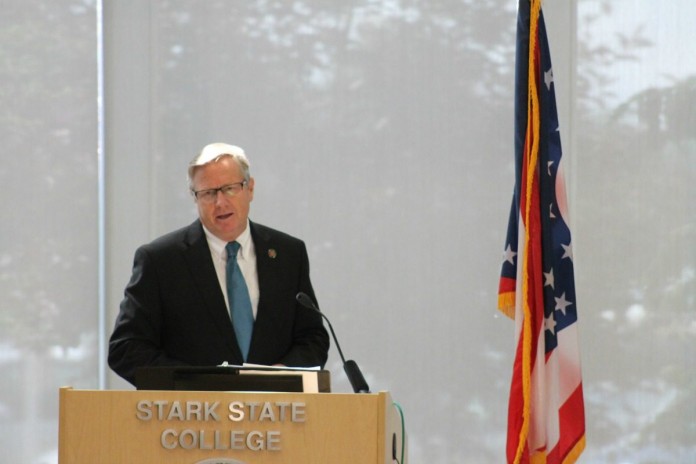 CANTON, Ohio — Natural gas production in Ohio has nearly doubled in the past two years.

That’s message from the Ohio Department of Natural Resources’ “State of the Play” presented at Stark State College in Canton July 2.

The ODNR released data for 352 horizontal shale wells that reported production in 2013. The wells drilled in the Utica and Marcellus shale produced 3.6 million barrels of oil and 100 billion cubic feet of gas in 2013.

Check out the infographic about the shale industry’s history

Check out the infographic about Ohio’s producing wells

In addition, the ODNR issued the production data for the first quarter of 2014. A total of 418 wells reported production of 1.9 million barrels of oil and 67 billion cubic feet of gas.

Production increased nearly twofold from 2012-2013 because of increasing activity in the Utica shale and continued development of midstream infrastructure.

Rick Simmers, chief of the ODNR’s Division of Oil and Gas Resources, said that processing and gathering systems in Ohio are catching up with the number of wells, which has increased production.

The production growth depends heavily on the development of the midstream infrastructure needed to transfer the resources to market, Simmers said. In a little more than 24 months, the industry developed 11 processing facilities and miles of new pipelines throughout the states.

It is estimated that companies have spent more than $6 billion on midstream infrastructure. Some of the major players are MC 3 Midstream, Williams Access, Markwest, Nisource and Caimen Energy.

“investing billions of dollars and creating jobs for Ohioans, proving the value and importance of the Utica shale play.”

Another reason gas and oil production has increased in Ohio is a decrease in the length of time it takes for wells to be drilled.
Simmers said in 2010, the drillers took about 35 days to drill one well. In 2014, the average is 15 days and that includes drilling to 17,000 feet deep.

Simmers said in 2013, the ODNR estimated that it would issue 550 permits. The agency issued 583 that year.

“The Utica play is the real deal,” Zehringer said.

He said the oil and gas industry is important to Ohio, but the state cannot let the health of the people ,or the environment be negatively impacted by it either.

The ODNR is working on is “induced seismicity,” or earthquakes resulting from human activity. The department created new testing requirements and regulations to monitor seismic activity on a drilling site. Simmers said the ODNR is working on the subject with officials in five states and leaders from universities, and expects to find solutions to the issue.

Simmers told the crowd there have been increased inspections on well pads since 2010 and the Ohio EPA is working to create new “inadvertent return” regulations for pipeline construction.

Inadvertent returns means that the ODNR is working with experts to identify best practices to prevent the slurry used in pipeline construction from coming up in sensitive areas where the pipelines are being constructed.