ASHLAND, Ohio — People who knew the late John McNaull of rural Ashland generally knew him for two things: his love of all things International, and his love for his country and family.

McNaull grew up on his family’s farm, homesteaded by his ancestors in 1815. He graduated from Ashland High School in 1939 and began his career working for Ashland Truck and Implement — a local International Harvester dealer.

In 1942, he enlisted in the International Harvester Maintenance Battalion of the U.S. Army, serving as a tank mechanic in the 12th Armored Division.

After the war, he returned to the dealership and worked his way up to sales. Then, in 1966, John and his wife, Bonita, along with his sister and brother-in-law, Vera and Eldon Crone, purchased what was then known as Ashland Implement, which is still a family-owned business.

But McNaull did more than work for a tractor company — he also collected and restored dozens of the same kind of tractor he sold. When he died, his collection included a Farmall F-30, an F-20, an F-14, a Farmall Regular and three Farmall F-12s, as well as various Farmall attachments and tools. 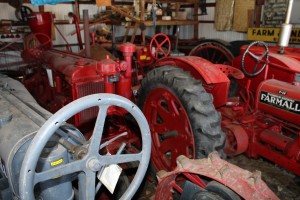 There were some rare finds in McNaull’s collection, restored to just like the day they were bought, said his adult children — Dan, Tom, Mike and Melanie.

“He restored everything to as near authentic as possible,” said Dan McNaull, who today serves as parts manager for family business. “The colors had to be right, the decals had to be right. He wasn’t one of these that went into it and put an automotive quality paint job on them — because they didn’t come from the factory with that paint job.”

John’s children sold most of the collection at auction March 15, at a sale that drew about 600 people from multiple states, and Canada.

Auctioneer Jim Barr, of Dilgard Real Estate and Auctions, said “it was an honor and a privilege” to do the sale for the McNaulls — whom he’s known all his life and from whom he also purchased his own farm equipment.

But one tractor the family didn’t sell was an F-12 their grandfather, Cloyd McNaull Sr., had bought and used on his farm.

The F-12 was Cloyd’s second farm tractor and at the time seemed like a big tractor — being rated for a two-bottom plow. It was a good fit on Cloyd’s farm, which at the time included sheep, chickens and dairy cattle. But as tractors got bigger and more efficient, so did the tractors on the McNaull farm. The F-12 was traded for a new tractor some time in the 1930s-1940s.

John McNaull, however, never entirely lost track of that F-12 and one day during the winter of 1967-1968, while driving past a local dealership, he noticed a similar-looking tractor for sale. He stopped to look and discovered the tractor had the same steering wheel hand spinner that had been carved onto Cloyd’s Farmall.

Indeed, it was the same tractor.

John and Cloyd bought the tractor back, restored it and essentially started the McNaull family collection.

“That’s the one (tractor) that really got Dad started in tractor collecting,” Melanie said. “Dad followed that tractor over the years and he was able to buy it back. He got that and decided he needed more tractors.”

He also helped found the Ohio chapter of the International Harvester Collector’s Club, where he earned the nickname “Mr. International.”

John also was known in Ohio as the “Magneto Man” because he worked on rebuilding old magnetos — the part of antique tractors that generated the electric for ignition.

When he finished rebuilding a magneto, he attached a tag that read “with good hot spark.”

When it came time for a particular show, John’s children often served as “designated drivers,” helping drive the tractors at the shows.
Being old tractors — none of them drove particularly fast. The brothers raced to get to the tractors with rubber wheels, and Melanie was left to drive the one with steel wheels and a rubber banding — making for a memorable, and bumpy, ride.

John and Bonita traveled to hundreds of shows — some in neighboring states. At one point, they bought an old motorhome for their travels.

“They bought this beat-up old motorhome and Dad rehabbed it and away they’d go,” Melanie said.

John and Bonita both died at age 91, but were active in tractor shows until the end. They voluntarily gave up driving, but when it came time for a tractor show — they found a way to get there.

Doctors’ visits made them tired — but not tractor shows.

“When two hours of doctor visits and other stuff wore them clear out, it came time for the tractor show and they were ready for the whole show,” Tom said.

Their memory will live on in many ways, including an antiques building at the Ashland County Fairgrounds that the family donated money to help build.

The McNaulls also have their own “memory bears” to keep, which were made from clothing that John and Bonita wore, as well as some International tractor insignia.

The family continues to own Ashland Implement, where they sell new and used farm equipment. Dan is parts manager and Tom is general manager. Mike helps with the computers and office technology. Melanie, now a retired school teacher, has worked for the company in the parts department. 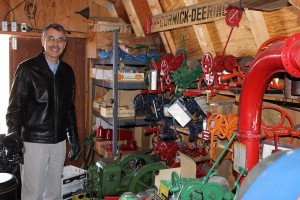 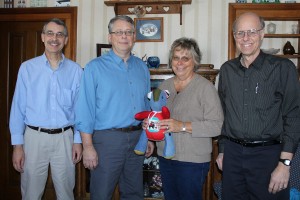