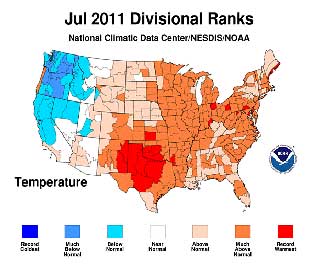 Persistent, scorching heat in the central and eastern regions of the United States shattered long-standing daily and monthly temperature records last month, making it the fourth warmest July on record nationally, according to scientists at NOAA’s National Climatic Data Center.

The heat exacerbated drought conditions, resulting in the largest exceptional drought footprint in the 12-year history of the U.S. Drought Monitor. Exceptional is the most severe category of drought on the drought monitor scale.

Drought conditions at several locations in the South region are not as long lived, but are as dry, or drier, than the historic droughts of the 1930s and 1950s.

Across the nation, precipitation averaged 2.46 inches. This was 0.32 inches below the long-term average, with large variability between regions. This monthly analysis is based on records dating back to 1895.

• Oklahoma and Texas had their warmest months on record, with average temperatures of 88.9 F and 87.1 F, respectively.

Only seven of the lower 48 states — all west of the Rockies — experienced a July average temperature near or below the 20th century average.

In Oklahoma City, July was the warmest single calendar month, with an average temperature of 89.2 F, beating the previous record of 88.7 F set in August 1936.

Washington, DC’s Reagan National Airport had its warmest single calendar month on record, with an average temperature of 84.5 F, breaking the previous record of 83.1 F set in July 2010 and July 1993.

• The July heat wave was characterized by unusually warm minimum temperatures during nights and early mornings. This is typical of U.S. heat waves in the last decade, and consistent with increasing warm summer nighttime extremes observed across much of the country since the late 20th century.

• Wetter-than-normal conditions occurred along parts of the Gulf Coast, all of the Pacific Coast, and much of the upper Midwest.

At the same time, July offered no relief to the parched soils of Texas and Oklahoma where it was the second (tied) and ninth driest July on record, respectively.

• Exceptional drought, as defined by the U.S. Drought Monitor, covers more than 75 percent of Texas. Drought conditions are so harsh in some locations that it would take as much as 20 inches of rain in one month to end the drought.

In Oklahoma, the entire state is suffering from moderate-exceptional drought compared to September 2010, when drought conditions covered only four percent of the state.

This pattern resulted in Washington State having its coolest May-July period on record, and the Northwest climate region tied with its second coolest.

The West climate region had its 10th coolest May-July period.

The South climate region had its second warmest May-July and the Northeast and Southeast both had top 10 warmest periods.

• During the same period, a steady flow of moisture from the West coast to the upper Midwest resulted in the fifth wettest May-July for the Northern High Plains area.

Meanwhile, it was the second and seventh driest such period for the South and Southeast, respectively.

• The six-month (February-July) and the year-to-date (January-July) periods were record dry for Texas, New Mexico and the South climate region.

Conversely, across the Northern half of the country, most states experienced much above normal precipitation.

• Flooding along the Missouri River Basin is associated with a record amount of precipitation during August 2010-July 2011 in Montana, North Dakota, and Minnesota.

The previous records for statewide precipitation during this period were from 1901 and 1907 in North Dakota and Montana, respectively.