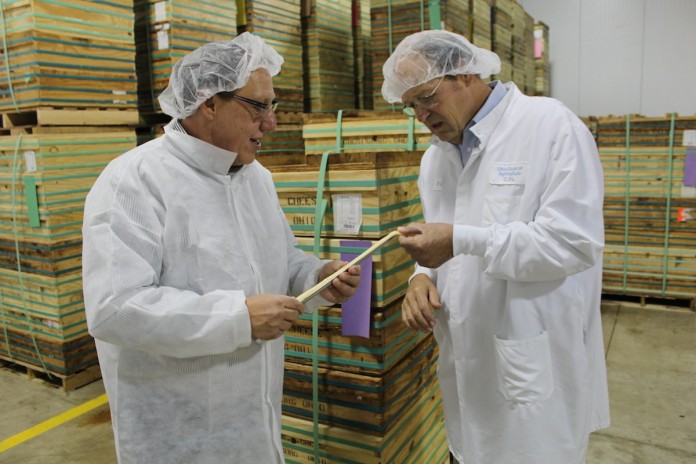 MILLERSBURG, Ohio — There are some good things happening within Ohio’s cheese industry, which leads the nation in Swiss cheese production.

Staff from the Ohio Department of Agriculture got an update on the industry during a tour Oct. 31 that featured three of the state’s premier cheese makers: Pearl Valley Cheese of Coshocton County, Guggisberg Cheese and Holmes Cheese Co., both of Holmes County.

In 2012, Ohio produced nearly 138 million pounds of Swiss cheese across 14 different plants. The cheese makers told ODA officials that demand for cheese is good, and that demand is pushing them to expand. 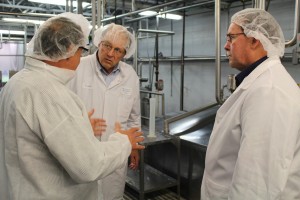 A little further east, Guggisberg Cheese is expanding its Sugarcreek plant in a project that is expected to double its production and capacity. Richard Guggisberg, president, said the biggest part of the project will be done by January of 2015. In all, he expects about 60,000 square feet will have been added.

During the three-stop tour, the ODA staff saw every detail of how cheese is made, and got to taste some fresh samples. One thing they saw over and over again was stainless steel. The vats and mixing tanks, and even the gears and chains were made of non-rusting stainless steel.

“We’ve probably got more stainless steel production capacity in terms of processing than we have milk supply, which creates a competitive situation,” he said.

The competition tends to lead to higher milk prices, a plus for farmers. But to offset those prices, processors need consumers who understand the higher prices for cheese.

He said the focus for many years was on flavor, and it still is. But now, there’s greater consumer emphasis on cost, and sometimes that means a lower price cheese, but with less attention to flavor. 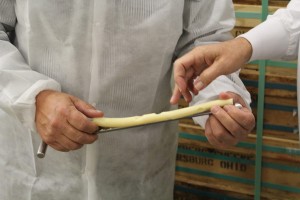 Today’s consumer, he said, is often more concerned about how cheese is packaged and how easily it can be sliced.

Chuck Ellis, president of Pearl Valley Cheese, said there are two different segments of the market: The specialty cheeses, which often command a higher price, and middle-America, where people may be looking “for those lower priced cheeses to put on their sandwiches and to cook with.”

Like other cheese makers, he continues to introduce new products to keep up with both types of consumer demand, but he said cheese makers still have to decide on a market focus.

For Pearl Valley, about half of their cheese is Swiss, and the other half is Colby-style. They make about 5.5 million pounds of cheese a year, and employ about 40 people.

Pearl Valley doubled its capacity in 2002, and recently installed an anaerobic digester that produces biogas, which the plant uses to produce about one-third of its electric needs.Winning awards.

Richard Guggisberg said his expansion is largely being done to “keep up with the changing consumer taste” and to provide a consistent product to his customers. They employ 175 and foresee some new opportunities for employment as the expansion is completed.

The three cheese makers on the tour are located in a competitive region for dairy processing, which includes the state’s top dairy counties.

• Holmes County is the state leader in total number of dairy farms, at 428, followed by Wayne County, at 397, according to Ohio Department of Agriculture data.

• Wayne County has the most dairy cows in Ohio, at 32,500, according to the National Agricultural Statistics Service.