WESTERVILLE, Ohio — Even as Julie Doran harvested some of her first crop of hemp Sept. 16, she knew it could end up on a burn pile.

Doran planted nine varieties of hemp at her farm in Westerville, Ohio, in June.  A few months later, it was time to start harvesting.  But hemp farmers have to have samples taken from each variety to be tested for THC before harvesting.  After the samples are taken, they have 15 days to complete the harvest.

But the samples take time to come back. So, farmers wind up in a catch-22. Is it better to start harvesting immediately after samples are taken and risk taking a loss on labor and time if the samples test hot — or wait until they get test results and risk not having enough time to harvest?

Doran tried it both ways, for different varieties. For her first two varieties, which she had tested in mid-September, she started harvesting before she got test results back. But for the other seven, Doran waited until she got her test results back. Those were tested on Sept. 21. She finally heard back Oct. 3: all the varieties were compliant.

But with a deadline less than a week away, there was no time to waste. 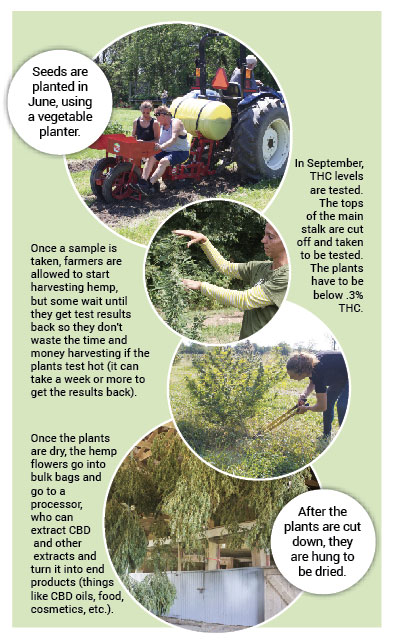 Doran had help for harvesting — seven other people, including Sherry Russell, who helped her plant in June. On Oct. 6, Doran and Russell cut down the whole plants and took them up to the barn in the back of a pick-up truck. Other workers tied the plants on a string and hung them over a wooden frame outside.

They cut the top flowers, which are best part of the plant, and put them on drying racks. The rest of the plant got hung up in the barn to dry. Doran didn’t put the best flowers on the plant in the barn, because they could absorb the hay smell.

After the plants are dry — which can take anywhere from a few days to over a week, depending on the plant and weather conditions —  she shucks them.

Doran uses a machine, but different farmers use different techniques for shucking. The machine pulls the flowers off of the stems, and the flowers go into a bulk bag to send to the processor, where the CBD is extracted so it can be turned into end products.

Doran and other farmers with the Ohio Hemp Farmers Cooperative, which she founded, will send their hemp to a processor in Kentucky. The agreement the co-op has with that processor allows the processor to keep a percentage of the extracted oils, while the rest of it goes back to the co-op.

The co-op, through its manufacturer members, will make its own line of products with some of the oil and sell some to outside manufacturers.

But the harvest is only the culmination of a season filled with intensive hand labor. Doran had three to five people working in her field almost every day throughout the summer. She filled in on weekends and made sure that each person got at least two days off each week.

The work involves weed whacking, directly pulling weeds, finding and removing bugs on the plants and other similar tasks.

“I’ve had a lot of people come because they think it’s really cool … and they last a day or two,” Doran said.

It was a good year for growing hemp. Despite a hot summer and a few windstorms in Ohio, Doran said, she and most of her cooperative have done well.

“Just growing and having healthy plants, I’d say we had a good year,” she said.

But the regulations surrounding hemp and THC are making things difficult, Doran said. The cost of one test is covered with the license fees. But Doran needs a test for each of her varieties, which costs $150 per test. And if she had to have a second test done on a variety — for example, if she didn’t manage to harvest before the deadline after the first test — that would cost $300.

She is hoping to see the THC level requirements made more lenient, or to see the U.S. Department of Agriculture allow farmers and states to test according to Delta-9 THC instead of total THC. Total THC includes Delta-9 THC and THCA, a non-psychoactive component that can be converted to THC.

Right now, in Ohio, hemp is tested for total THC. Some states that had pilot research programs, however, test based on the Delta-9 THC levels, which makes the 0.3% limit easier to stay under.

Medical grade marijuana typically has 20% THC. Though 0.3% isn’t enough to have psychoactive effects, plants above that level are legally considered marijuana and must be destroyed — a major loss for farmers whose crops test hot.

“This industry will totally fall on its face, or be able to launch further, depending on what the USDA does with their regulations,” Doran said.

Because of the total THC testing requirement, Doran had to rule out about 80% of the hemp genetics she considered when looking for seeds this spring.

The nine varieties that Doran did pick out for this year are all planted in the same field. And they all look different. Some are taller, some wider, some more mature and some less.

She would never suggest that other farmers grow that many varieties at once — she only did it to test out different varieties for the co-op. But she does recommend growing two to three varieties. That way, if one tests hot, farmers have another one or two to fall back on.

It’s hard to say yet how profitable the co-ops crops will be this year, Doran said.

A few years ago, some hemp farmers in some states were making up to $75,000 per acre, industry experts say. Last year, with more people growing hemp, that number was closer to $20,000 per acre.

Doran said the market will depend partly on how many acres of hemp are actually grown successfully this year, and how many test hot and have to be destroyed. She probably won’t know for sure what that market looks like until some time in November or December.

“It can change dramatically from year to year with a new crop,” she said.

Now that her harvesting is done for the season, Doran is turning her attention to preparing for her third hemp summit Nov. 7. She is planning to plant a cover crop on her hemp field, then mow it over before planting next year. The license she got this year is good for three years, but she will have to pay a $500 renewal fee each year.

Doran is also keeping an eye on what the USDA plans next. It recently held a second public comment period on its interim final rule for the federal hemp program Sept. 8 through Oct. 8.

The USDA invited all people involved or interested in the crop to offer comments, but especially solicited comments from farmers and others who have been operating under the current interim final rule this year.