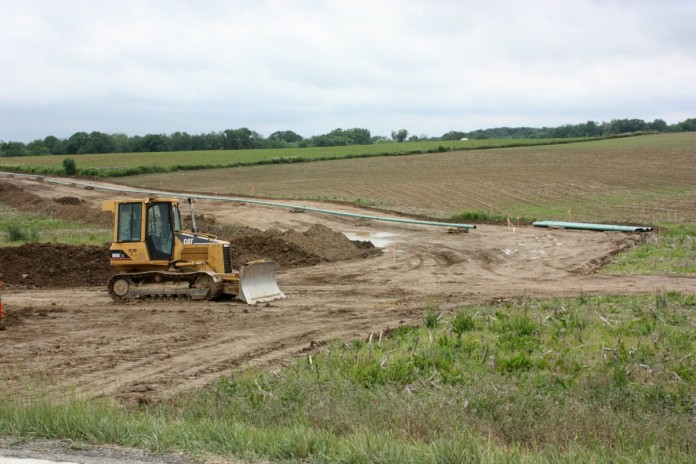 (Part I of a two-part series.)

(A Harrison County farm family shares what they have learned about negotiating three pipeline easements for their farm in part II.)

SALEM, Ohio —  The shale boom has brought a great deal of pipeline construction to eastern Ohio. However, now that wells are online and pumping, the boom is echoing beyond Ohio and larger, interstate pipeline projects are being considered.

The bottom line is that Ohio landowners should prepare for pipeline construction, and that means being aware of what pipelines are being considered.

According to the Ohio Farm Bureau Farm Federation, over 38,000 miles of pipeline will be refitted or new ones constructed in the next 10 years.

There are several types of pipelines being constructed, including collection lines, intrastate lines and interstate lines. They can range in size from 3 or 4 inches in diameter all the way to 42 inches.

Collection lines extend from the oil and gas wells and are governed by the Ohio Department of Natural Resources.

Intrastate lines are controlled by the Public Utility Commission of Ohio and the Ohio Power Siting Board unless they transport liquids like the ethane, propane, butane, and natural gasoline. Proposed liquids lines include the Blueracer, Sunoco or Bluegrass lines.

Interstate lines are governed by the Federal Energy Regulation Commission. Any pipelines under FERC can mean the use of eminent domain if a landowner and the pipeline company can’t reach a leasing agreement. However, most pipeline companies don’t want the issue to go that far, and want to find a deal that makes both parties happy.

In addition to the collection and intrastate lines under construction, three new interstate lines are being considered for Ohio. They are in the preliminary stages and FERC applications have not been submitted for any of them. However, the companies are working to complete preliminary work such as environmental studies or surveys.

ET Rover Pipeline, a subsidiary of Energy Transfer, is a new interstate natural gas pipeline company that will transport natural gas from processing facilities located in the Marcellus and Utica shale areas to market regions in the United States and Canada.

Additionally, the Rover Pipeline Project expects to construct a segment from the Defiance, Ohio, area through Michigan and ultimately to the Union Gas Dawn Hub, in Ontario, Canada, providing producers with access to storage facilities, and end-users in Michigan and Canada.

The Rover Pipeline is being designed to transport 3.25 billion cubic feet of natural gas per day through approximately 800 miles of 36- and 42-inch pipeline.
ET Rover will also need to build compression and metering stations along its route. Tentatively, the Rover Pipeline has plans for four mainline compressor stations and five lateral compressor stations. As of now, the pipeline’s capacity will be filled.

Natural gas will be delivered to two interstate pipelines at the Midwest Hub-Defiance, Ohio; to Consumers Energy, Vector, and Michigan Consolidated in Michigan, and to the Union Gas Dawn Hub, Ontario Canada.

Approximately 80 percent of the main transmission line will be under agricultural property and will parallel existing pipelines, power lines, or roads.

The company is still preparing to submit a formal application to FERC in January 2015.

Currently, environmental surveys are being completed along the proposed route, but landowners will have to wait before negotiations will begin for pipeline easements.

ET Rover Spokeswoman Vicki Anderson Granado said the company will wait until it gains approval from FERC before negotiating for easements.

The Nexus pipeline is also being considered for development across parts of Ohio. The pipeline would begin in Ohio and extend to Michigan and end in Ontario.

The initial project will connect with Texas Eastern Transmission and Tennessee Gas Pipeline Company in the Appalachian Basin, with Michigan Consolidated Gas Company and Consumers Energy in Michigan, and with the Enbridge Tecumseh storage facility and the Union Gas Limited Dawn Hub in Ontario.

The proposed NEXUS Project is in the early development stage, with plans to start the pre-filing process in the first quarter of 2015.

The project is years away from beginning construction, according to a company spokesman.

ANR East is an interstate project that is being evaluated by the parent pipeline company, ANR Pipeline system. The ANR East will be a 500-mile line that will transport natural gas from Clarington, Ohio, to Bridgman, Mich.

It is under consideration, but the company does not expect a definite decision until the end of 2014. If the company approves the project, an application would be submitted to FERC in early 2015.

Since it is in the preliminary stage, there is no definite details, but it is anticipated to carry 1.2 billion to 2 billion cubic feet per day of natural gas. It appears to take a similar route to the ET Rover pipeline.

The only preliminary work happening on the project could be some landmen doing preliminary work on easement agreements. A definite path of construction has not been determined but should be available in a few months.

Jenna Palfrey, senior communications specialist, said the company hosts a community relations line and encourages the community to call and ask questions as well as report anyone who appears to be an employee of ANR EAST, if they are not being professional or not doing as they should. The phone number is 855-895-8754.

The three interstate pipelines are in the pre-filing process periods. Once they submit an application for a permit, the FERC will conduct a review of the project, evaluating the need, proposed facility locations and overall impacts of the construction and operation of the expansion.

The pipeline companies plan on having open houses where landowners who are impacted will be able to ask questions. In addition, any FERC project will have a hearing in the areas impacted, and landowners can share their concerns and views about the project.

None of these three projects are close to this point.