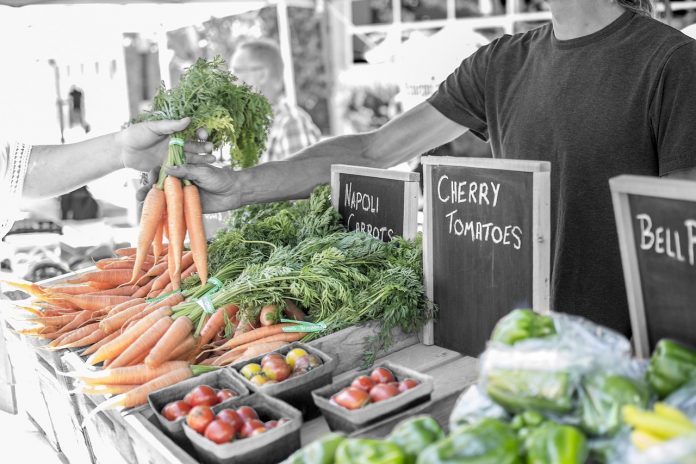 Not all farmers like to spend a lot of time working online. But online sales and preorders are a big part of the business for some farms, especially in light of the pandemic.

Grim, a student at Pennsylvania State University’s Mont Alto campus, got the idea for the platform after helping a local farm, Twin Springs Fruit Farm, with their online sales. Throughout the process, Grim and his team have worked with farmers to make sure the system works for them.

“Our website is farmer friendly,” Grim said. “I know a lot of farmers out there, they don’t want to be on their computer or their phone … we try to make it so they don’t have to spend too much time.”

Twin Springs Fruit Farms, of Orrtanna, Pennsylvania, had been talking about adding online sales for a while, said Michael King, one of three owners of the farm. But they never got around to it until the pandemic forced the issue.

“We were having trouble moving stuff at the farmers market,” King said. His dad, another of the owners, writes a weekly newsletter that goes out to about 10,000 people. So he told people through the newsletter to call the farm’s warehouse and put in their orders, paying via credit card over the phone. The farm would then take orders to a farmers market for no-contact pick up.

“And that was a total nightmare,” King said.

It was inefficient. King’s wife spent eight hours on the phone, trying to handle orders and payments. After struggling through that system for a few weeks, they switched to a Wix website that allowed them to sell online. That was better, but still took a lot of time to manage inventory and orders.

Grim starting helping out with the website and online orders after visiting the farm and talking with King about what they were doing. He saw room for improvement. Later on, he asked King if the farm would be interested in trying a new platform — one he was developing with his own team. The farm agreed to be the guinea pig.

The transition over to using Table Rock took some time for Twin Springs Fruit Farm. For a little while, the farm was using both Wix and Table Rock, and keeping up with inventory on both sites was a hassle.

“Jake said, ‘Trust me, it’ll be better,’” King said. “It is better, now that it’s done … his system was designed around us.”

Over the summer of 2021, Twin Springs Fruit Farm helped test out the platform. Twin Springs gave Grim feedback on how it was working for them, and what else they wanted to see on the website, which allowed Table Rock to make sure it was fitting farmers’ actual needs.

For example, at one point, King told Grim he wanted to be able to customize where products showed up in the online store. Within a week, Table Rock wrote the code to make the website do it.

“Any complaint I had, they fixed it,” King said. While King has seen some farms around him switch back to just in-person sales, once farmers markets opened back up, for his farm, online orders are worth the time. Over Thanksgiving week, they sold more than $12,000 worth of their products through online orders.

Now, Table Rock is focusing on getting more farmers on the platform. As of mid-November, the website had completed more than 3,000 online orders, with more than 1,000 shoppers.

Sabrina Yushinski, outreach representative for Table Rock Markets, said she and the rest of the team continue to encourage vendors to let them know if there are ways they can improve, since farms of a different size or with different crops than Twin Springs might be interested in different features.

“We are still a new company, and we are trying to evolve whatever way we can to better suit our vendors,” Yushinski said. “We try to include the voice of the farmer in our service.”

Grim and most of the team are still college students. Several of them met and got involved with Table Rock Markets through competitions at Penn State. Yushinski, a food science major at Penn State, first joined the team for a business pitch competition called Ag Springboard.

It’s not always easy to balance everything, but Grim said his professors have been very supportive and sometimes allow him to tailor projects to fit with what he’s doing at Table Rock. In some ways, his work with Table Rock Markets makes some of his college classes feel easy. And Penn State resources have been a big help as he builds the company.

Though the company is still in its early stages, Grim and the team have already seen some successes. This fall, they received a jumpstart grant from AgChoice Farm Credit. They have also competed in and won several Penn State competitions.

“I think the wins and successes help validate the potential of our platform,” Grim said.

Though several online sales platforms for local food have developed or expanded during the pandemic, Grim believes Table Rock can stand out.

Some platforms have farmers to create their own websites and sell from there. Table Rock has farmers make accounts and sell off of its website, more similar to websites like Etsy and Amazon, Grim said. That means less work for farmers. Grim also believes it will make it easier for customers to find vendors, since they just have to use one website instead of different websites for every farmer they want to buy from.

Co-founder Aidan Rauscher also sees the platform as a way to help address sustainability — whether environmental, or financial.

“I think there’s a lot of sustainability issues in agriculture,” Rauscher said.

By next May, Grim is hoping to have at least 100 vendors on the platform. For now, Table Rock is focusing on reaching out to farmers in Pennsylvania, Maryland, Virginia and Ohio. But eventually, Grim hopes to see it used nationwide.

“The main thing is continuous growth,” he said.