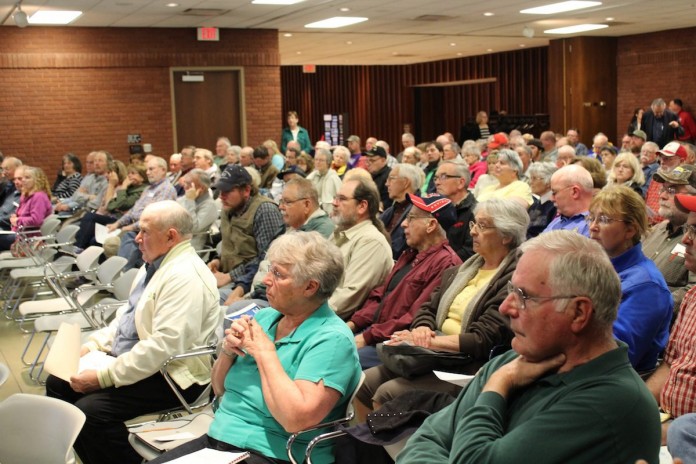 WOOSTER, Ohio — Time will tell whether the drilling boom underway in eastern Ohio and western Pennsylvania will ever make its way to the central and western Ohio counties.

There are predictions both ways, but whatever happens this part of the state can count on one thing: new pipelines and infrastructure are on their way.

“You’re going to be finding out very shortly that you’re all involved, very much, in an energy development process,” said Arnold.

There are multiple major, interstate pipeline projects being pursued in Wayne and surrounding counties, including the Rover, Utopia and Nexus projects, and there is potential that some existing pipelines will be serviced and replaced at this same time.

The Rover is a massive interstate pipeline, ranging from 24- to 42-inch diameters, that is expected to transport 3.25 billion cubic feet of natural gas per day. The pipeline will transport natural gas through Pennsylvania, West Virginia and Ohio, en route to Michigan, where it will then be transported across the Midwest and into Canada.

The company building the Rover pipeline expects it will be in use by late 2016, and into the first half of 2017.

The company hopes to have the Utopia lines in use by 2018.

The Nexus Pipeline will move natural gas through northeastern Ohio, en route to Michigan and the Midwest, moving 1.5 billion cubic feet of gas per day. Barring final regulatory approval and construction, that line is expected to be in use by the end of 2017.

Arnold said the push to build more pipelines is a reflection of supply and demand.

Supply is up, mostly because of the new shale wells, and demand is up because of changes in energy policy that are moving the country away from coal, and toward cleaner fuels like natural gas.

The purpose of the meeting was to help landowners get ready, so they make the right decisions when approached with a lease agreement.

“It’s gotten to the point that you need to be able to tell the players with a scorecard, but there’s no scorecard there,” Arnold said.

Part of his job, as he travels the state speaking to landowners, is to help them determine the “scorecard” that works for their own land.

One of the first things he tells landowners is that no two properties are the same. There can be significant differences in topography, land use, and environmental considerations.

He said farmers need to make their leases specific to the land being affected, and to consider all of the many ways that a pipeline can impact their land.

In most cases, the land in the lease will be out of crop production for at least two years, he said, which means farmers may have additional expenses related to renting more land, buying additional crops, and traveling to fields that are further away from the home farm.

One of the first things to ask about the pipeline itself is about the material that will be flowing through it. If a lease is not limited to natural gas, it could later transport other materials, ranging from oil, to even sludge.

And, landowners should ask about the size of the pipe. The larger, interstate lines are typically regulated by federal entities, such as the Federal Energy Regulatory Commission, and the smaller, intrastate lines are typically regulated by state-level entities, like the Ohio Public Utilities Commission and Ohio Power Siting Board.

Arnold was joined by Finney, who is also part of the Wayne County Ag Success Team, which organized the event.

Finney said signing a pipeline lease is a lot like buying a used car — you don’t just buy into it at the price offered. Finney and Arnold both said landowners should work with qualified attorneys, not only for monetary compensation, but to be sure the land is put back the way the owner wants.

“These pipelines are a reality,” Finney said. “They’re going to be coming through one way or another.”

His advice is for landowners to be proactive, and to make sure their leases stipulate what can and cannot be done on their land.

Wayne County Commissioner Ann Obrecht, who also is a dairy farmer, said they coordinated the meeting so landowners would know their options.

“This is more complicated than most people understand,” she said.

She said landowners should seek good attorneys, and make sure that in the future, their farmland is still farmable.

Part II: Negotiating the pipeline easement your farm can live with (Oct. 30, 2014)