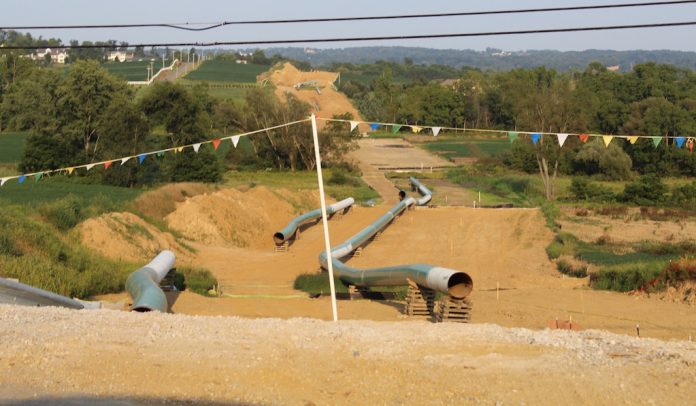 The Appalachian fracking boom was a boon to the U.S. economy, but that prosperity didn’t trickle down to the counties in Ohio, Pennsylvania and West Virginia where natural gas was drilled.

That’s according to a new report released Feb. 9 by the Ohio River Valley Institute, a western Pennsylvania-based think tank.

Local officials and Ohio’s oil and gas industry are pushing back at that claim, saying the report cherry picked data to fit a narrative and the author doesn’t understand the Ohio River Valley.

“Anyone who reads that who lives here knows it’s hogwash,” said Larry Merry, port authority director for Belmont County, Ohio. “The picture they were trying to paint was laughable. That’s someone that’s never been here. If they had, they never looked out the window.”

What the report found

The report looked at the economic impact fracking had on 22 gas-producing counties in the upper Ohio River Valley and northeastern Pennsylvania in the last decade. These counties were at the forefront of the Marcellus and Utica shale gas boom.

Many of the counties lost jobs and population, while making small gains in personal income, according to the report, titled “Appalachia’s Natural Gas Counties: Contributing more to the U.S. economy and getting less in return.”

“What’s really disturbing is that these disappointing results came about at a time when the region’s natural gas industry was operating at full capacity,” said report author, Sean O’Leary, in a statement. O’Leary lives in the Seattle area but grew up in Wheeling, West Virginia. “So, it’s hard to imagine a scenario in which the results would be better.”

These areas produced nearly 40% of the nation’s natural gas from 2008 to 2019. The soaring gas production was expected to bring hundreds of thousands of jobs to the tri-state area.

The gross domestic product for most counties the Ohio River Valley Institute looked at increased at a greater rate than the U.S. average, according to the study.

While the numbers of jobs nationally increased by 10% during that time period, job growth in the 22 counties grew only 1.6%, the report states.

In Monroe County, Ohio, oil and gas extraction, mining and quarrying made up 83% of the county’s gross domestic product in 2019. And yet, the county still experienced a 24% decrease in the number of jobs and 4% drop in population in the past decade.

What locals and the industry have to say

Mike Chadsey, public relations director for the Ohio Oil and Gas Association, pointed to state data from the Ohio Department of Jobs and Family Services to rebut the Ohio River Valley Institute’s claim that the shale boom didn’t deliver on its jobs promise.

The most recent quarterly report on economic trends in Ohio oil and gas, released in April 2020, found that 208,323 people were employed in shale-related industries, in the third quarter of 2019.

Wages for Ohio oil and gas workers were significantly higher than the average Ohio wage for all industries of $51,740. The state has seen $86.4 billion in private investment from all parts of the oil and gas supply chain since 2011, according to another Jobs Ohio report.

“The oil and gas industry disagrees with [Ohio River Valley Institute’s] report,” Chadsey said. “We are having a positive economic impact in southeast Ohio, and there’s more to do. And we’re going to do it.”

Merry said the report overlooks the local impact it had on farmers and other small businesses in the Appalachian towns.

Ohio Congressman Troy Balderson, R-Zanesville, put out a statement refuting the fracking report that included comments from a handful of other local officials and industry leaders.

Why did this happen

The counties studied had to meet two criteria to be included in the report. They had to be responsible for at least 2% of the state’s total production of natural gas, and derive at least 6% of their gross domestic product, or GDP, from mining, quarrying or oil and gas extraction.

The report looked at three measures of prosperity — income, jobs and population.

O’Leary pointed to several factors that could’ve led to this “resource curse,” including the boom-bust nature of extractive industries, sourcing labor and materials from outside the area and low commodity prices.

Because the area studied tends to be more sparsely populated, any growth in jobs or income might have been diluted because people go outside their communities to make purchases.

The report also pointed to “a failure of tax and fiscal policies.” Instead of taxing gas development more heavily, many municipalities and counties gave out incentives or reduced taxes to entice the companies to come to the region.