POLK, Ohio — There’s no substitute for experience, and that’s especially true when it comes to telling the story of dairy farmers.

Esther Welch, who recently retired as editor of Ohio (Holstein) News, had the experience of being a lifelong farmer, a mother and wife, and an accomplished writer.

Welch became editor of the breed magazine in 1990, after she produced a few fill-in issues during a staffing change. She then wrote a proposal to become editor, and was selected.

But long before she became editor, and before her first articles appeared in the magazine, she was forming her roots and her appreciation for agriculture.

Welch grew up on her family’s grain and beef farm west of Ashland, which her family still farms today.
She married Eugene Welch in 1949 and the couple and their families operated U-Dean Farms, a registered Holstein operation near Polk.

In the 1950s and ’60s, she started sending articles to Ohio News, and she also worked as a stringer for local newspapers, covering school board meetings and agricultural events.

In 1988, two years before she became editor, Welch had already won one of her top honors, being named National Dairy Woman, by the World Dairy Expo.

The Expo called her “a communicator and journalist, bridging the gap between the farmer and the world.”

Those words, according to Welch, are what drove her to write and to later become editor of a magazine that circulates across Ohio, and beyond.

She asked repeatedly that news of her retirement be kept simple — “not be too flowery.”

And while that is a respectable request, there’s no hiding the appreciation people had for her work.

“She’s so passionate and proud about agriculture and helping others,” said Scott Welch, her son, who lives with his family in Florida.

Scott said his mother was very committed to what she wrote, often staying up late at night, and sometimes involving the family in helping proofread.

He said when his mother met a new person somewhere — even if they were far from home —  that person quickly got to know her love of dairy farming.

“You would know she’s a proud dairy farmer from Polk, Ohio, by the second sentence of meeting her,” he said.

Tom Thorbahn, a retired dairy farmer from Vickery and a past Ohio Holstein Association president, said Welch was an energetic person who helped get people in the dairy industry involved.

He was treasurer when she was hired, and estimates he’s known her for at least 25 years.

He said her knowledge of the industry helped her to be successful.

Chris Sayers, co-chairman of the news committee, said Welch has “tremendous enthusiasm for dairy farming and the Holstein breed, and was a great ambassador.

Sayers, who also works for Select Sires, said Welch “served as a mentor to a lot of us.”

The U-Dean dairy farm is still in the family, operated today by Esther’s brother-in-law, Dean, as well as her grandson, Ryan Welch, and her nephews, Randy and Mike. It consists of about 100 milking head, 650 acres of crops, plus the 170-acre farm west of Ashland, where Esther grew up.

Esther and Eugene always advertised breeding stock in Ohio News and still do. The ad, she said, helped to show other advertisers and potential Holstein members, that she herself believed in the same publication she expected them to support. 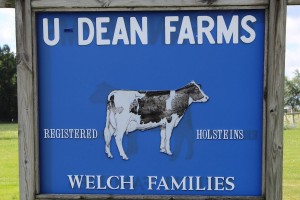 Instead of giving out business cards, she would usually give people a copy of the magazine.

“I figured you could lose a card, but you didn’t lose a magazine,” she said.

Something else that won’t be lost is the memories people have of being in the magazine, and on its cover.

Welch said one of her goals was to get as many different farms on the front as she could, including those farms that are doing good things, but often go unrecognized.

“I always said I would like to put every Holstein member on the cover,” she said. “Dairymen in particular work so hard and they need some recognition. And, I like to tell the dairy story.”

Welch is quick to admit she had lots of help along the way. As editor, she worked with a “news committee,” which helped plan editions far in advance, and also contribute content. She said it was important to her to have a mix of voices, so it wouldn’t just be her own.

“This (magazine) does not happen overnight and nobody does it alone,” she said. “We all need lots of help.”

One of her best experiences was helping to produce two souvenir issues commemorating the years when the National Holstein Convention was held in Ohio. The first was in 1977, and again in 2000.

“Those were really landmarks to work on,” she said, adding that copies of those editions went across the country, and overseas.

Looking ahead, however, she sees a bright future for the magazine, partly because farmers still want a printed magazine that they can hold, and pass around the house. And, the publication continues to print information Holstein producers want and need.

“I hope it will continue to be the glue that holds the statewide membership together,” said. “It can be a common meeting place for everybody, and it’s the way you get acquainted with people in other areas.”

The new editor is Jackie Bickel of New Vienna, Ohio. Like Welch, Bickel has a strong dairy background and passion for the industry, and she is an experienced communicator and graphic designer.