WASHINGTON — The U.S. Department of Agriculture (USDA) released its annual report, Expenditures on Children and Families, also known as the Cost of Raising a Child.

The report shows that a middle-income family with a child born in 2013 can expect to spend about $245,340 ($304,480 adjusted for projected inflation*) for food, housing, childcare and education, and other child-rearing expenses up to age 18. Costs associated with pregnancy or expenses occurred after age 18, such as higher education, are not included.

While this represents an overall 1.8 percent increase from 2012, the percentages spent on each expenditure category remain the same. As in the past, the costs by location are lower in the urban South ($230,610) and rural ($193,590) regions of the country. Families in the urban Northeast incurred the highest costs to raise a child ($282,480).

“In today’s economy, it’s important to be prepared with as much information as possible when planning for the future,” said USDA Food, Nutrition and Consumer Services Under Secretary Kevin Concannon. “In addition to giving families with children an indication of expenses they might want to be prepared for, the report is a critical resource for state governments in determining child support guidelines and foster care payments.”

The report, issued annually, is based on data from the federal government’s Consumer Expenditure Survey, the most comprehensive source of information available on household expenditures. For the year 2013, annual child-rearing expenses per child for a middle-income, two-parent family ranged from $12,800 to $14,970, depending on the age of the child. 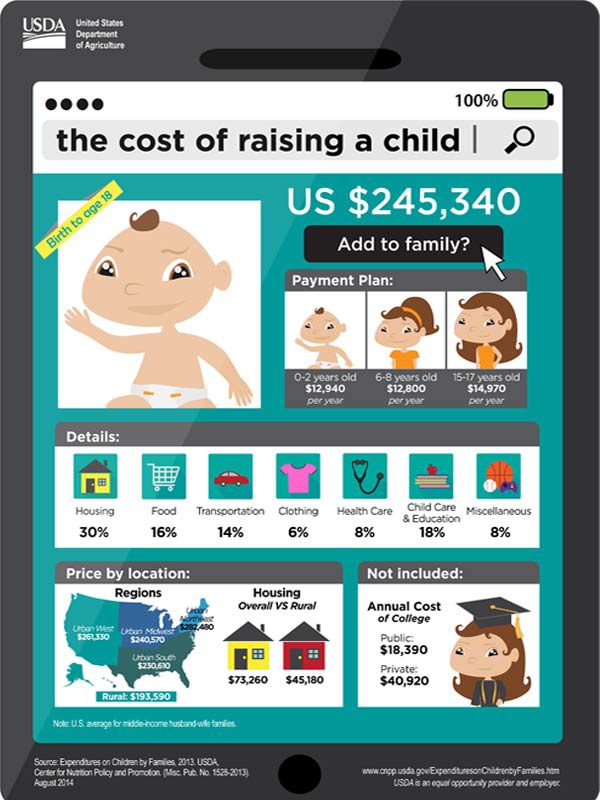 “Food is among the top three expenses in raising children,” said CNPP Executive Director Angela Tagtow. “Parents have the challenge of providing food that is not only healthful and delicious, but also affordable. We have great resources such as ChooseMyPlate.gov that features tips to help families serve nutritious and affordable meals. I encourage parents to check out our Healthy Eating On a Budget resources, 10-Tips Nutrition Series, recipes, and MyPlate Kids’ Place, which features digital games for kids to get engaged themselves in healthy eating.”

“Variations by geographic region are marked when we look at housing, for example,” said study author and CNPP economist Mark Lino, Ph.D. “The average cost of housing for a child up to age 18 is $87,840 for a middle-income family in the urban West, compared to $66,240 in the urban South, and $70,200 in the urban Midwest. It’s interesting to note that other studies are showing that families are increasingly moving to these areas of the country with lower housing cost.”

In 1960, the first year the report was issued, a middle-income family could have expected to spend $25,230 ($198,560 in 2013 dollars) to raise a child until the age of 18. Housing was the largest child-rearing expense both then and now. Health care expenses for a child have doubled as a percentage of total child-rearing costs during that time. In addition, some common current-day costs, such as child care, were negligible in 1960.

The full report, Expenditures on Children by Families, 2013, is available on the web at www.cnpp.usda.gov. In addition, families can enter the number and ages of their children to obtain an estimate of costs with a calculator via the interactive web version of the report.

Not many takers at county fair COVID vaccine clinics