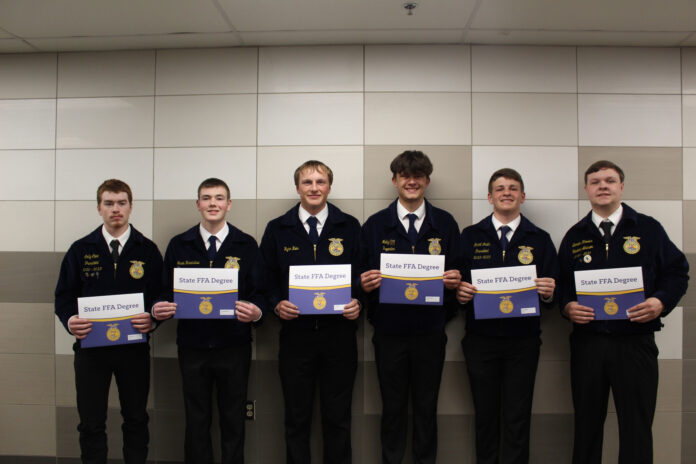 Wellington, Ohio — The Wellington FFA chapter held its banquet at Wellington High School, May 13. The chapter recognized members for participating in contests and fundraisers and also acknowledged those who received their degrees this year. The chapter participated in 17 different Career Development Events and had two teams place in the top 10 in the state competition. The Nursery and Landscape team that included Derrick Andolsek, Natalie Calfo, Alaina Collins and Heather Reininger placed 8th in the state. The Grain Merchandising team that consisted of Dustin Andolsek, Derrick Andolsek, Natalie Calfo and Heather Reininger placed 7th in the state.

The What Took You So Long! award goes to a first-year senior member who went above and beyond. This award went to Ava Zadorozny.

The Loudonville FFA chapter went to the Ohio Expo Center for the 94th annual state convention May 5-6. In the fourth session, members participated in the agriscience fair; Hudson and Natalie Endslow received second place in the power division for middle school. Emily Kern and Abby Eikleberry placed second as well in the food science middle school division.

There were three officers who received gold ratings on their books. These officers include Secretary Linde Hahn, treasure Laura Cutlip and historian Sydney Portz.