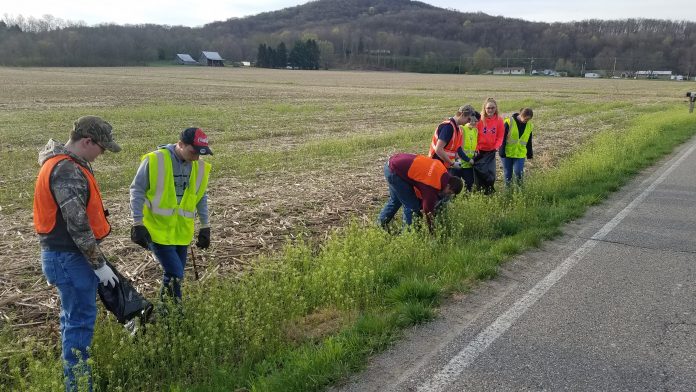 There were two recipients of the Justin Stuckey Scholarship: Abbi Pettit and Cassie Baird; and the Farmer’s School Scholarship was awarded to Khenadi Grubb and Wyatt Cory.

The highest honor an FFA Chapter can bestow on any individual is the Honorary Chapter Degree. This year Mitch Culbert received the degree.

Proficiency awards were presented to:

This year, the Star Greenhands were Tyler Cummings and Connor Collins.

The Star Farmer for 2018 was Meri Grace Carson.

The chapter also rewards a member as the Star Chapter Agribusiness Member. This year the winner was Tori Evans.

CHILLICOTHE, Ohio — Zane Trace FFA Members participated in Beautify for the Buck Fifty April 11. Members walked along the sides of Sulphur Spring Road in search of cans, bottles, plastic cups and other trash.

Ninety members took part in the event and a total of 42 bags of trash were collected between Snyder Road to the north and the entrance to Great Seal Park to the south.

Twelve members of the Zane Trace FFA Chapter have been selected as finalists in the Ohio FFA Agriscience Fair: Cody Clark, Jiarui Zhang, Henry Zitzelberger and Lilly Stewart, all within plant systems;

These members will compete May 2 at the Ohio Expo Center during the FFA State Convention.

Holly McClay, the Ohio FFA vice president, was also present and spoke at the banquet.