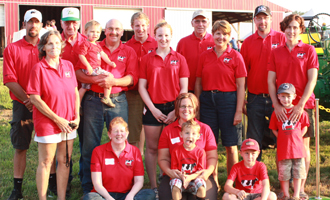 COCHRANTON, Pa. — When a farm has been in a family for more than 210 years, those generations of farmers have to make a lot of wise decisions to stay in business. In 2008, when the current generation of the Rynd family decided to build a new barn and milking parlor — only to watch the recession hit and milk prices spiral downward after they moved in the barn in February 2009 — they weren’t sure if the decision was a wise or foolhardy one.

The Rynds’ Crawford County farm, Rynd Home Farm, was purchased in 1791, and has been a staple in the northwestern Pa. farming community ever since.

On July 17, the family opened their farm to host a customer appreciation event for the Meadville branch of AgChoice Farm Credit. More than 450 people attended the open house, which included a meal, live entertainment, local foods displays, activities for children and the Penn State tractor rollover simulator.

Currently, the Rynds own and rent approximately 450 acres, and raise corn and alfalfa for their milking herd of 200 Holsteins.

They built the new 120-by-200 freestall barn, adjacent holding area and Bou-Matic double 10 swing milking parlor, and increased their herd size from 130 to 200. After the herd adjusted to its new barn, the Rynds started milking three times a day. They’re adding on to the new barn already, lengthening the barn to be able to move the dry cows here, so they can calve inside. Calves are raised in calf pens and hutches in the older barn facilities.

Brooks Rynd, who does most of breeding and the herd health management (it helps that his wife, Christy, is a veterinarian with Greener Pastures in Saegertown, Pa.), said the new facility has improved the cows’ health and production markedly.

“It’s like a light switch went on,” he said. “The cow comfort just wasn’t there (in the old barn).”

They’re using sand bedding in the freestalls and, although “sand is just a real pain” for the manure handling system, the advantages far outweigh the disadvantages, said Jim Rynd. It’s cleaner, more readily available in their area than sawdust, doesn’t freeze or get hard in cold weather, and is just more comfortable for the cows.

They are, however, reconfiguring their manure storage, which was the “biggest headache” of the new construction.

They’re currently adding a cement bottom and ramp to the lagoon. The Rynds also added misters to the freestall barn in June, which come on automatically in intervals when the temperature in the barn gets above 74 degrees.

In the 90-degree weather, the sprinklers run for three minutes every five minutes, a section of the barn at a time.

“The cows love them,” Jim said, and although it’s too early to tell the misters’ impact on production, they didn’t see the huge drop-off when the hot, humid days persisted this summer.

Reproduction has also been improving in the new barn, and the Rynds are also testing the Semex AI 24 activity monitoring collars. The computerized chips in the collars record the cow’s activity, which is fed to a computer program that identifies cows over certain levels that are likely in heat and flags them for the Rynds to check.

“I think they’re working good,” Jim said, although he said there are some kinks to work out. “I think in the long run, it’ll pay off.”

They use the collars on cows 40 days after calving, and take them off when they’re 90 days confirmed pregnant.

Brooks, who joined the farm in 1996, said the new construction has given all of them a more positive feeling about the farm’s future.

“Five years ago, I don’t know if I would’ve said that.”