This demonstration program builds upon this same group of collaborator’s findings from the 2012-2015 and 2016-2017 projects.

FSA has made investments through the Conservation Reserve Program at addressing nutrients, specifically nitrogen, reaching America’s surface waters through the riparian buffer programs (CP 21 and CP 22).

Riparian buffers have been shown to be effective at removing nitrogen from surface flows, as well as shallow subsurface groundwater, but in the tile-drained landscape of the Midwest, a significant portion of the nitrogen lost from agricultural fields does not have the opportunity to interact with the carbon-rich buffers. 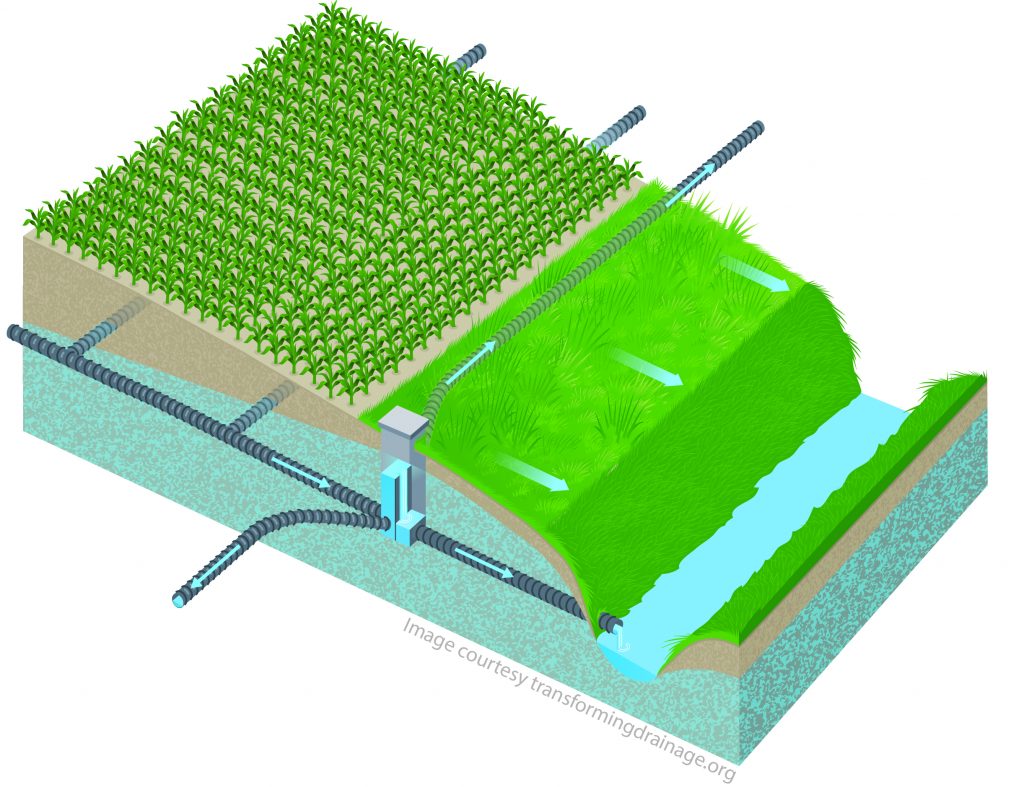 The goal of a saturated buffer system is to hydrologically reconnect a subsurface drainage outlet with an edge-of-field buffer. This practice takes advantage of both the denitrification and plant nutrient uptake opportunities that are known to exist in buffers with perennial vegetation.

The seven saturated buffers had an average nitrate-N concentration reduction ranging from 41 to 98 percent during the monitoring period. Nitrate load reductions ranged from 10 to 194 pounds.

The average installation cost of the seven monitored saturated buffers was $3,584, and they have operated at an efficiency of $1.22/pound of N removed over the 20 collective site years of monitoring.

With a median $/lb. N removed value of $1.22, saturated buffers are one of the most cost-efficient nitrogen removal practices.

ADMC also contracted with the Department of Crop Sciences from the University of Illinois, Urbana-Champaign to develop a decision support tool to identify sites that will likely provide cost-effective locations for saturated buffer installations in the Midwest.

This step-wise model revealed a conservative estimate of 46,920 miles of cumulative stream bank suitable for saturated buffers. This study once again exhibited that saturated buffers are a cost-effective method in removing nitrogen.

The developed decision support tool exhibited, in a conservative manner, that saturated buffers could potentially be installed to treat nearly 9.5 million acres of tile-drained Midwest land and remove 5 percent to 10 percent of the tile contributed nitrate-N load or 2 to 5 percent of the overall load delivered to the Gulf of Mexico.

Enhancing a standard buffer with a saturated buffer where possible could remove approximately 13 times the annual amount of N, while making the practice six to 10 times more efficient in terms of $/lb. of N removed.