SEVILLE, Ohio — Northeast Ohio has more dairy farms than any part of the state. But one dairy operation in southern Medina County is a real standout.

Yellow House Cheese — operated by Kevin and Kristyn Henslee — is among the first in the state to milk sheep.

There are roughly 100 sheep dairy farms nationwide, and the Henslees are part of

a niche market that has found its way into the Buckeye State.

For the Henslees — both 35 — they wanted a type of farming they could afford, one that would be sustainable and fit their schedules. 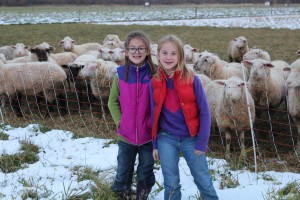 They decided on a flock of East Friesian-Dorset cross sheep, which combine good dairy and meat traits. The Henslees had some farming experience, but they’re new to dairy.

“We sure do get some strange looks around here,”

However, the Henslees are committed to what they do.

Last year, they milked about 60 head, and for next year, they’ll have close to 100 ewes. The Henslees’ sheep are bred so they will lamb in late winter and produce milk between March through August. 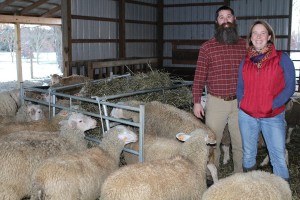 This makes for a busy summer, and allows for some off time when the sheep aren’t producing milk. But some chores simply need done year-round.

The sheep are primarily kept on a rotational, intensive grazing schedule, which requires moving the fence and the sheep to new grass every two to three days. 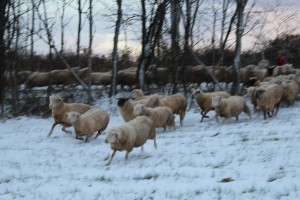 The Henslees lease pasture on several nearby farms. This reduces the need for barn space, and it allows for a natural cycle between animal, soil and plant life.

“It eliminates the amount of manure you keep inside, and you’re putting manure all over the field,” said Kevin Henslee.

Last year, he was able to keep his sheep on pasture until the end of December. By moving the fence often, the grasses have a chance to recover, and the sheep get a fresh supply of growth.But, conditions do deteriorate as winter progresses. There is mud and snow to battle, and the increasing threat of a deep freeze.

This time of year, the grass still has a lot of nutrients, but its growth is quickly slowing.

The Henslees currently milk their sheep on their home farm — a four-acre lot near Seville. They milk eight ewes at a time with a custom-built milking parlor made just for sheep, by Trail Farm Supply of Trail, Ohio.

Still, getting used to milking sheep took time — for the Henslees and for the sheep.

It takes about an hour to milk 60 head, and during the summer, the Henslees get help from both of their daughters. The parlor is set up to accommodate the smaller body size of sheep, as compared to traditional cow dairies. A crowd gate system is used to coax the sheep forward, but on most days, just like cows, the sheep “want” to be milked.

“They try to jump over each other to get in here,” Kevin Henslee said.The sheep enter the parlor one-by-one in sets of eight, and it’s important that each set be led by a sheep who is a “leader,” meaning one who leads the rest all the way into the parlor. If the wrong sheep gets in front, it may not enter the parlor all the way, and a more aggressive sheep may head-butt it out of the way.

Once collected, the milk is used for the farm’s chief product: sheep cheese. The Henslees are known for their Yellow House Blue, a type that is popular in upscale restaurants and grocery stores. They took second place with their blue cheese at the American Cheese Society contest in August, in Madison, Wis.

They produce about 10,000 pounds of cheese a year, including some that they produce using Jersey cow milk from Cantendo Acres in nearby Wayne County. They process the cheese inside of a renovated carriage house, approved for use by the Ohio Department of Agriculture.

The cheese is stored and aged in a renovated root cellar, where the temperature and climate are controlled for optimum cheese production. The cheese is aged for at least 60 days, and the flavor improves with longer-aged cheeses.

The Henslees’ next big project is to move their milking setup to a 22-acre farm they just purchased, located between Seville and Wadsworth.

The property consists of an old dairy cow setup, they said, and with some elbow grease they think they can turn it back into a dairy farm, albeit a sheep dairy farm.“We’re going to bring it back to life,” Kristyn Henslee said. “It just needs a family to love it.”