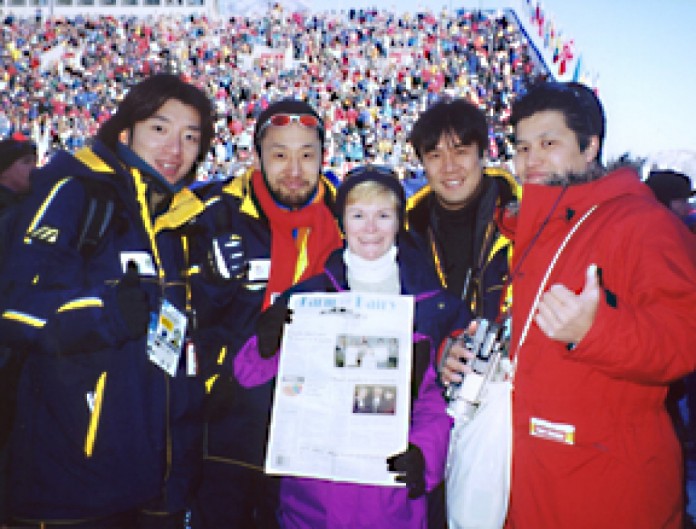 We were at the Olympics.

I had a once-in-a-lifetime, last-minute opportunity to attend the 2002 Winter Olympics in Salt Lake City Feb. 9-13. The experience was awesome.

I witnessed Swiss ski jumper Simon Ammann (now nicknamed “Swiss Air”) sneak by the favorites to win the gold medal in the 90K individual jump (and later the 120K jump). I experienced the excitement of the crowd-pleasing U.S. freestyle mogul skier and defending Olympic champion Jonny Moseley, who debuted his twisting flip “dinner roll” jump in front of our eyes. He stood in the top three until the last competitor down the hill, teammate Travis Mayer of Springville, N.Y., bumped him into fourth with a run good enough to win the silver.

Mogul skiers, for example, bump their way down 27-degree slopes, over mounds up to 4 feet high, and make two jumps, getting as high as a three- or four-story building.

Freestyle aerial skiers shoot off of 13-foot jumps at take-off angles of 70 degrees, reaching heights of 50 or 60 feet while flipping head over heels and hoping to land feet first on a slope most of us can’t even stand up on.

Downhill skiers race at speeds of 85 miles an hour down a precipice, and bobsledders (oops, make that bobsleigh drivers) hit speeds of more than 80 mph. Speed skaters race on razors and a slip means a bowling pin-like knockdown of racers who slam into padded barriers at 30 mph. And we won’t even discuss the head-first skeleton racers.

But the thrill of victory (no talk of the agony of defeat) transcends the risk. And we love them for it.

On our home turf, Americans were tireless in their enthusiastic support of U.S. Olympic athletes, but what struck me the most was the honest support given to athletes from all nations. The cynic will say the Olympic spirit is tarnished, but in person, I found it to shine as bright as ever.

An interesting tidbit from the Senate version of the farm bill: In a world of checkoff confusion, some would like to see even more checkoffs. An amendment offered by Sen. Patrick Leahy from Vermont, and approved by a voice vote, would provide a program for generic promotion, research and information regarding organic products.

And another Senate farm bill goody: Senators agreed to an amendment to prohibit the import, export and interstate trade of “bear viscera” or products containing bear viscera. I’m glad to know our Senators are on top of that illegal trade of bear guts.