(Scroll down for a photo gallery of scenes from Havana, Cuba.)

HAVANA, Cuba — To get a sense of the paradox that is Cuba, look no further than José Martí, poet and journalist who fought for Cuban independence in the late 1800s.

A national hero (the international airport bears his name and there is a massive memorial statue in Havana that predates the revolution), Martí wrote, “Liberty is the right of every man to be honest, to think and to speak without hypocrisy… A man who obeys a bad government is not an honest man.”

But he also wrote, “All life is duty.”

(Note: Editor Susan Crowell was selected to travel to Cuba in September with a group of 20 agricultural communicators. The trip was coordinated by the American Agricultural Editors Association, and she received a partial travel stipend from the association’s Professional Improvement Foundation to participate.)

Cuba has a love-hate relationship with the U.S.: It would love to be released from the embargo and reap the influx of U.S. dollars, but it still harbors a deep-seated hatred of all things American. The government, that is. I suspect many Cubans would emigrate to the U.S. if given the opportunity.

When our Cuban tour guide mentioned her father and uncles had applied for, and received, a free plot of land to work on their own, I asked her about their production and challenges.

From our conversations with the Cuban officials, I knew that successful farmers could increase their initial land plot of 13 hectares up to 67 hectares, so I asked her if they had done well enough to get more land.

“He lives in the United States now,” came her abrupt reply.

I’m sure there is more to that story, but on the surface, it seems even the lure of free land isn’t enough to keep people in Cuba.

Cuba enacts “reforms,” to encourage entrepreneurs or farm cooperatives, but still dictates pricing, or levies fees and taxes. It gives willing Cubans small land to farm, but not the tools or training to be successful, so they give up. Cuba wants foreign investment, but on its terms and under its ultimate ownership and control.

And, for a socialist government that seeks to own or regulate production and distribution as a whole, the idea of private ownership and profit is inconceivable. Still they talk the talk.

The pragmatic side of Cuban President Raul Castro, Fidel’s brother, recognizes the need to restructure the country’s legal environment to transfer opportunity from a very rigid structure and central decision-making, to more decentralized ownership, and the private sector. The socialist side of him wants to maintain control.

Sixty percent of public spending is on social services, like education and health, compared to the average of about 12 percent in the rest of Latin America. The result is a highly literate society, but one that depends completely on government services to exist.

“We built a society that is completely different in values from other countries,” said University of Havana economist Dr. Jorge Mario Sanchez. “There are those who honestly believe we have the right to demand the state to provide everything for free.”

That has created a “distorted consumption pattern” that “we assume is our right.”

That also creates a huge pressure on the government to keep provisional goods free or to subsidize them, like free plastic surgery or 5-cent admission to a baseball game.

Sanchez said inflated employment is another huge drag on the Cuban economy. Eighty-four percent of the Cuban population are still state employees. Of the 5 million workers, he said 1 million is working in offices “filing papers, doing nothing productive” and they need to be “relocated” into “productive state companies, co-ops or the private sector” but “you couldn’t do that by decree in any society.”

“We honestly believe we have the right to claim to be subsidized.”

And because so many rely on government jobs, there is resistance to any reform of the Cuban socialist system. There is also the reality that there isn’t capacity or money to finance widespread reform.

Income polarization has become a new challenge, and it’s seen in an inverted social pyramid where taxi drivers are earning more than surgeons.

After the U.S. imposed its embargo in 1960, Cuba came to depend heavily on the Soviet Union for subsidies and other inputs to its economy. In fact, Soviet “sugar subsidies” and trade credits to Cuba totaled $4 billion in 1989 alone, according to author Yuri Pavlov in the Soviet-Cuban Alliance. And so the breakup of the Soviet Union crippled the Cuban economy and triggered widespread hunger and unemployment.

As a result of the Soviet breakup, Fidel Castro instituted the “Special Period in Peacetime,” (1990-1995) a time of austerity measures, and quickly food was rationed (one source indicated food consumption was cut to one-fifth of previous levels), and medicine and transportation became scarce items.

In addition to major agrarian reforms, Castro instituted other economic measures: He decriminalized possession of U.S. dollars, moving the currency from the black market into daily transactions. He legalized self-employment (in 140 specific occupations), and boosted Cuba’s tourist industry. (Tourism currently accounts for 52 percent of total foreign investment in Cuba.)

These moves were the first nod to a market economy as opposed to Castro’s egalitarian socialist system, and it gave Cubans a taste of a free market structure. Suddenly, cuentapropistas, or self-employed people, discovered if they worked hard, they could make a great deal more money than in their government-rationed job.

Castro also legalized the sending of “remittances” from individuals in other countries to Cubans on the island, many of those remittances coming from Cubans in exile to Miami. According to Carmelo Mesa-Lago, professor emeritus at the University of Pittsburgh, about $4 billion in family remittances entered Cuba in 2014, representing 7% of the island’s GDP.

The current Cuban government goal is to create 500,000 small, self-employed businesses, and it now grants licenses to individuals in about 200 activities.

In May 2015, the Cuban government reported approximately 10 percent of the island’s labor force were self-employed workers. Most are in service sectors connected to tourism: paladares (small family restaurants, often in the home); bed and breakfast rentals, including Airbnb; and private taxis.

Many of these startups get their initial capital from Cuban-American remittances from family members in the States.

“The private sector is growing in Cuba,” said entrepreneur Gilberto Valladares, who spoke to us Sept. 19.

In 1999, he started his own barber shop, as well as a “living museum” to the barber trade. His shop is located on one of the oldest streets in Havana that is now home to 20 private businesses, employing around 100 people.

After he got his barber shop off the ground, he expanded it with a barber school, teaching students from the immediate neighborhood for free, with priority to young people from disadvantaged homes or disabled students. As he spoke to us in his shop, his words were being interpreted through sign language for the benefit of several students.

Valladares said the government lets him use the building rent-free, but slowly, with his own income (credit or loans are not available to him), he is restoring it.

He uses the word “contagious,” hoping his school’s outreach will trigger similar social efforts by other Cubans. “We all can give a little bit to the society,” he said. “It can be your money, your hands, your knowledge or your time.”

Valladares was one of five entrepreneurs selected to speak briefly with President Barack Obama during his March 2016 visit.

“I told him the real crisis in the world to me, more than an economic crisis, is a values crisis,” Valladares said. “We need to start building the society from below.”

Since 1975, Cuba’s population rate has been in a deficit, meaning there are more people dying than are being born, and they recognize the long-term implications to that trend. They are the ninth most aged country in the world — there are now more Cubans 60 and older than those under age 15.

The trend is a result of more Cuban women working in professional roles, and universal access to medical care, which includes contraception (too often that includes free abortions, our guide told us).

It’s also a result of a pinched economy where children bring an economic hardship to families, a common shortage of housing, and also high levels young people leaving the island to live in other countries.

“To me, the women what have more than one children are my heroes,” said tour guide Meylin.

A group of Cuban workers trim a roadside patch of grass. 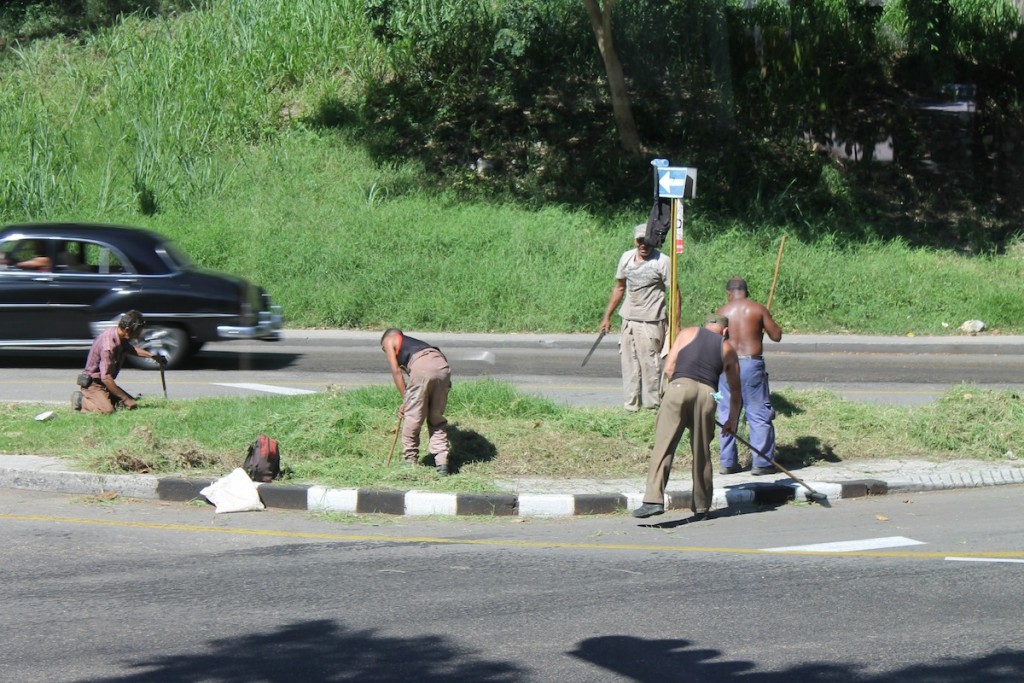 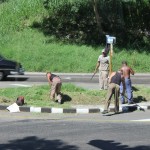 A group of Cuban workers trim a roadside patch of grass.
2 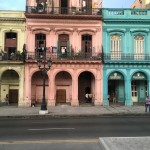 Colorful buildings on the Plaza de San Francisco in Havana.
3 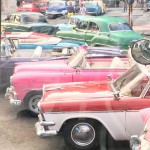 Vintage cars are popular taxis for tourists in Havana, Cuba.
4 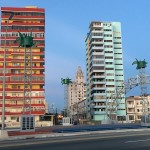 Elian Gonzalez was at the center of an international custody dispute in 1999, at age 5 - this plaza was site of almost daily marches of thousands demanding that the child be returned to his father in Cuba, and is now a plaza dedicated to him.
5 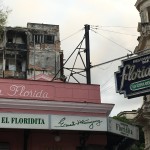 The touristy El Floridita restaurant/lounge in Havana was a popular haunt of Ernest Hemingway. But in comparison are the rundown buildings seen in the background.
6 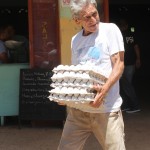 Stocking eggs to sell in an outdoor market in Havana, Cuba.
7 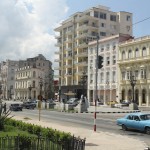 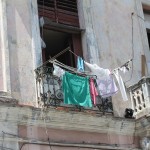 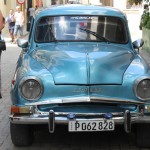 Old cars are still on the road in Cuba, although some are located for the benefit of tourists.
10 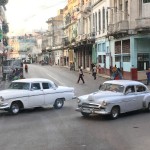 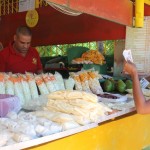 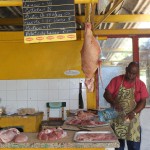 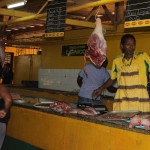 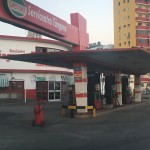 Gas stations around Havana are shuttered due to lack of supplies.
15 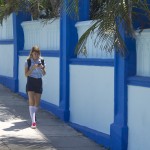 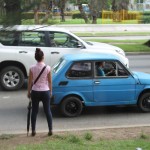 The large and small on the Cuban roadway.
17 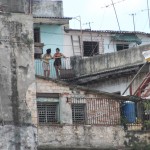 The infrastructure and condition of buildings in Havana is crumbling.
18 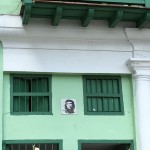 The face of Ernesto “Che” Guevara, Argentine guerrilla and modern Cuba co-founding father, is all over the place in Cuba, even more visible than Fidel Castro, although some say he was Fidel Castro’s chief executioner.

Access to goods and services in Cuba varies by location (easier access in the cities, as opposed to the countryside), and by income and political access.

Our Cuban guide Meylin said when young people marry (and many choose not to get married, even if they’re in a committed relationship), the newlyweds must live with a set of parents, because housing is simply not available. She had the luxury of her own apartment, because she inherited it from her aunt.

One source puts the housing deficit at 1 million units, and a March 2015 survey of Cubans found 41% of the respondents said the U.S. product or service they most desired was housing.

The internet is available at work, but only for work-related purposes. Employees who surf the web for personal reasons risk being reprimanded or losing their ability to go online. Buying internet access is expensive, and you can tell if there’s public wi-fi in a particular area of Havana, by the cluster of people gathered there, looking at their smartphones. Most websites are state-controlled.

Infrastructure is deteriorating — we could not flush our toilet paper, but had to place it in a trash basket. In some public restrooms, an attendant handed us our toilet paper before we entered the stalls. And a tourist gallery could be right across the street in Havana from an apartment building with no running water.

The ideological struggle between capitalism and socialism continues today in Cuba. Cubans say they value their way of life, but they certainly don’t turn down the influx of U.S. dollars from tourists or family members.

On recent years, Cuba has increasingly relied on Venezuela, and is now facing a similar recession because of failing relations with it. (In 2014, Cuba depended on Venezuela for about one-fourth of its GDP.)

The same day we flew into Havana, so did Iranian President Hassan Rouhani. According to Voice of America, Rouhani met with Cuban President Raul Castro to deepen their collaboration in bilateral relations.

VOA reported that during the visit, “Iranian and Cuban officials signed agreements for collaboration in health, education and science sectors, as well as a memorandum of understanding on banking.”