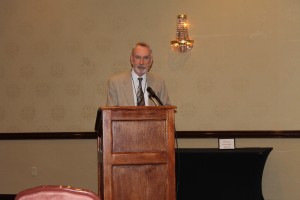 YOUNGSTOWN — Water was definitely on the minds of many in attendance at the YOUNG 2012 Conference and it showed with a nearly packed breakout session when the conference continued Sept. 7.

The YOUNG Conference began Sept. 6 with a trade show and educational sessions at the Covelli Center. It continued the following day with breakout sessions at the Holiday Inn in Boardman.

There have been questions surrounding the water needed in the fracking and drilling processes for Utica shale gas wells, from how to manage the water supply needed for the planned wells, how to ensure homeowners’ water stays safe and how to treat the water once it is used in the process.

Dr. Jeff Dick, associate professor at Youngstown State University in the department of geological and environmental sciences, was one of the panel speakers focusing on those water concerns.

Dick said more than 6 million gallons of water were used for the Neider well in Carroll County, so the concern is understandable. However, his research shows there should be no problem with Ohio producing enough water for the proposed Utica shale well.

Dick said that Ohio gets approximately 38 inches rainfall per year. If 1 percent was used for drilling, then even at 5 million gallons per well, Ohio could provide enough water for up to 4,000 wells per year.

“We certainly have the water available,” said Dick.

Dick has been working with the village of Garrettsville, Ohio, in Portage County, as they became concerned about drilling and the potential for contamination of the village water wells.

However, as he looked at the maps, he realized how many older Clinton wells were already in the area.

Dick said that the risk for contamination didn’t just start with the Utica shale wells. It could have happened many years before, as the Clinton wells went into production over the past 30 years.

“The potential contamination issue started before the Utica with the Clinton,” said Dick.

Karl Kyriss, president Aqua Capital Ventures, said the area has a lot of water, but logistics to transport it to where it is needed will be difficult.

“Without water, there is no gas,” Kyriss said.

He said the water supply challenges include additional truck traffic needed to get the water supply from the source to the well. Kyriss told the crowd that it takes more than 1,000 trucks to frack (hydraulic fracturing) a well.

This is where water lines will become necessary, according to Kyriss.

He added Ohio has an opportunity that Pennsylvania didn’t cease with the Marcellus shale drilling there. Ohio has the ability to get pipelines built to supply water for the gas wells before the potential damage to the roadways and environment is done.

He added that Aqua Capital Ventures built a line to supply most of the wells in central Pennsylvania and are looking at options in Ohio.

And what do you do with the water once it is used in the drilling or fracking process?

Two options discussed included installing pipelines into a processing center where the chemicals and waste could be removed. This method would include two lines — one to carry the water and the other would transport the gas extracted.

Another idea would be to build mobile processing units. These would be built on the well site and would be torn down after they are used.

One area Pennsylvania has seen a potential problem with residual waste disposal from the drilling and fracking process. He added that the waste has been found to have naturally occurring radioactive material. Hughes said the landfills are filling up with material from the waste, and this has created concerns about the water because of the water leaking out of the waste disposal site.