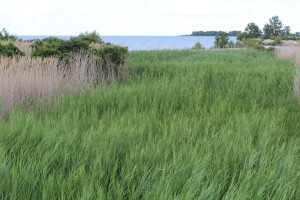 WOOSTER, Ohio — As Lake Erie and other Ohio water bodies suffer from algal blooms, the question becomes, what should we do?An easy answer might seem to just stop applying fertilizer — especially fertilizer that contains phosphorus — the primary culprit behind the blooms.

But if we want to continue producing crops, some phosphorus is a must. At a media workshop held this summer at Maumee Bay State Park, experts said phosphorus is one of a plant’s 17 essential elements, and that it is tied to the plant producing its own DNA.

He said conservative estimates show that fertilizer — whether natural or synthetic — is responsible for 30 to 50 percent of today’s crop yields. As world population and food demand continue to rise, taking away fertilizer could be disastrous.

While fertilizer plays an important role in crop production, there is an economic incentive, as well as an environmental incentive — to using the right amount, and keeping it in the fields.It’s not uncommon today for a farmer to spend several hundred dollars per acre, per year, just in nutrient application.

“The nutrient costs today are so high for the farmer, he can’t abuse them very easily,” Busdeker said. “It’s just because this stuff is so expensive.”

It’s estimated that the fields in the Maumee Bay Watershed receive about 48 pounds of fertilizer-grade phosphorus per acre, per year.

And as Steve Davis, state conservation engineer for the Natural Resources Conservation Service says, “that is the gorilla.”

But comparatively, little phosphorus actually makes it into the lake. Only about 1.1 pounds per acre is showing up in water tests conducted by Heidelberg University, and to put that in greater perspective, Davis said it’s about five granules per square foot — or five dots on a paper towel.

The size of the problem makes it hard to solve, because the nutrients are so dissipated.

“This is such a challenging problem, and it’s not been solved already because we are losing a little bit from a lot of acres,” he said.

Related: The water quality issue and what’s at stake

Dave Baker is director emeritus of the National Center for Water Quality Research at Heidelberg, where he oversees 15 water testing stations that operate year-round.

His data breaks down the issue in about every way imaginable, but the big figure is this: Of the total phosphorus entering the lake, about 80 percent of the problem is the dissolved form, which is 100 percent available for algal growth.

Baker said phosphorus definitely enters the lake through surface runoff, but even through channels like field tile, and to some degree, it comes from the breakdown of existing plants — not just chemical fertilizer.

And while he encourages erosion-control practices like no-till and cover crops, he said if not done properly, even those practices can lead to the problem.

A big thing with no-till, which is the most predominant conservation practice in the region, is establishing the proper soil structure to retain the nutrients, and applying the nutrients in a responsible manner — as directly as possible and by incorporating them into the soil, if applied by broadcast.

As private landowners, farmers have “broad rights to do what they want on their land so long as it does not demonstrably harm someone else,” said Scott Swinton, Michigan State University professor of agricultural, food and resource economics.

In some cases, they may “apply it (fertilizer) at a level that is optimal for their own purposes, but is in excess of what would be optimal if you could make (the decisions) on society’s welfare as a whole.”

But that’s not to say farmers are immune from the consequences of their decisions. They face public scrutiny on a regular basis, and must contend with the possibility of new regulations at the state and federal level.

Swinton’s research looks at ways to encourage farmers to change practices and adopt good conservation measures. Still, much of it comes down to economics.

“There is a willingness on the part of many farmers to change practices at the right price,” he said.

He’s researching ways to bring about change that don’t require direct payments and subsidies — two of the government’s most common methods of encouraging conservation.

A big challenge is that no two farmers are alike — in their philosophies, their soils, their management, or in their equipment setup. But, if more can see an income benefit by adopting conservation practices, they’re more likely to make the changes.

As Busdeker puts it, “There’s probably no two farmers that are exactly the same in how they do things, but as long as we can get people headed in the right direction and working on these principles so that they’re practical and sustainable, that’s what it’s all about.”

Four of the biggest principles he promotes are the Four Rs of Nutrient Stewardship: Apply the right fertilizer source at the right rate, the right time and right place. The ag industry is currently working on a 4R Certification Program that will educate and certify dealers and applicators in these four areas.

Farmers can apply the right rate by using precision equipment that deposits a variable amount of fertilizer, according to the nutrient needs of soil tests. And they can apply the right time and right place by avoiding winter and late fall applications, and avoiding areas that are too close to water bodies and drainage ditches.

A nutrient management plan is encouraged, and should be designed with the consultation of nutrient experts, including Certified Crop Advisors.

See next: Water quality: The goals