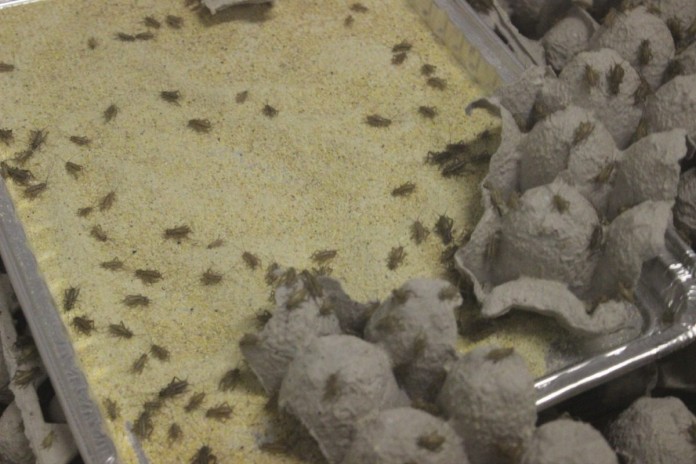 “But they only chirp when they are ready to breed, and you really are able to tell the temperature by the way they chirp,” said Bachhuber, a Wisconsin native and founder of Youngstown-based Big Cricket Farms.

There are several misconceptions about raising the insect as a food product for humans. Perhaps the biggest surprise, to Americans at least, may be the profit potential in farming crickets for more than lizard food and fish bait.

“One of our customers has been placing a 10,000-pound order each month,” Bachhuber said. “I still don’t know for sure yet, but our business plan says we will generate a couple of million a year. I think we will do more than that.”

According to Bachhuber, who opened the doors at Big Cricket Farms earlier this year and currently has five employees, that demand is a typical “problem” facing similar operations around the country.

”The FDA hasn’t said much, other than crickets can’t be ‘wild crafted’ — or gathered from the wild,” he said. “The issue across the industry has been supply.”

Crickets have been a common food in many parts of the world for centuries.

“I went to Thailand for one month in 2006 and I assimilated pretty quickly,” Bachhuber said of his first experience viewing crickets as food. “Eating crickets is very much a part of their diet; when you get your beer, instead of pretzels or chips, it’s bamboo worms or dry roasted crickets.”

Bachhuber’s experience in Thailand was the start of his culinary love affair with crickets, the texture and taste of which he described as somewhat like a sunflower seed. But he found the cricket market in the U.S. to be particularly soft.

That changed dramatically last year, when the United Nations’ Food and Agriculture Organization pointed out the impact of edible insects on food security in its report, Edible Insects: Future Prospects for Food Security.

John Coupland, a food scientist in Penn State University’s College of Agricultural Sciences, describes himself as a “flat out chemist.” His personal interest in insects as food began as a simple curiosity after watching TV shows like Man Vs. Wild.

Coupland’s research, however, has yielded a number of promising findings for the small, but growing, insect food industry.

“This is just me talking,” Coupland said. “But certainly when you look at insects as a means of protein and compare it to beef, the energy and water needed to produce a beef steak versus insect protein, it’s overwhelming. At least if you believe the numbers the insect people are giving.”

He cautioned, however, against taking such evidence too literally.

“There is less impact from an ecological standpoint when you are talking insects versus beef,” Coupland said. “But you still have to, for example, feed the insects, so maybe (the impact) is not as much when compared to soybeans.“

In an Aug. 23 posting to his Chemicals in My Food blog, Coupland noted the emergence of cricket flour as a commercial food ingredient.

“The crickets are farmed, killed, cleaned, roasted and ground to a high protein flour that can be used to make food,” he wrote.

But using insects as a source of protein in food products is still are largely a “hidden thing,” Coupland said, due in part to the taste of some proteins.

“If you have a steak, that is delicious protein,” he said. “With dairy or protein-enhanced whey, maybe it’s neutral. Then you move on to things like soy and you start to have a protein taste that you may want to hide.”

Another twist with crickets, however, is how they can “flavor up,” in Bachhuber’s words, based upon what they are fed in the final days before harvesting. 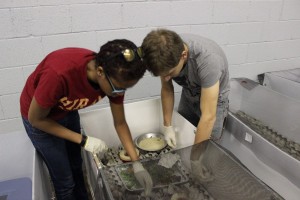 “They take on the attributes of the food they are fed, like apples, for instance,” Bachhuber said. “They really are what they eat.”

Coupland said he believes a profitable American market for crickets as an actual food is coming soon.

“The first step is going to be the people who want to be brave — like the ones who always want to eat the spiciest food,” he said. “Or kids who will want to because it seems disgusting.”

The company is also in negotiations with several gourmet restaurants seeking ways to recycle the less aesthetically pleasing vegetables used in recipes. Vegetables, along with organic chicken feed, forms the bulk of a cricket’s diet.

“We are focused on the business-to-business market now,” Bachhuber said. “But I think we will see body builders as the first mainstream, straight-up cricket eaters. They are already freeze-drying crickets and putting them in trail mix.” 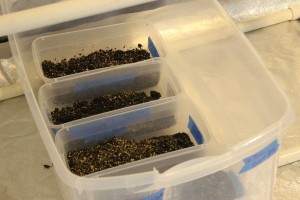 Bachhuber said that his 5,000 square-foot indoor farming operation was funded with $45,000 in start-up capital.

“There are four levels — fodder, feed, food and pharmaceutical. We wholesale raw, frozen crickets,” he said. “But if someone were to start at commercial scale human food grade (operation), I would say they would have to put up a quarter million.”

Given the infancy of the insect food industry as a whole, Bachhuber said, one negative food-safety related incident “could destroy all of us.”

While neither was aware of a specific study on insect food allergies, both Bachhuber and Coupland said those with allergies to shellfish, oysters and shrimp should avoid eating products containing insects.

“And there can be a high microbiological content, since they are rolling around in dirt, though much of that is (regulated),” Coupland said. “It’s not the bugs that are dirty, they just live their lives in dirty places.”

Big Cricket Farms is also participating in a Youngstown State University metagenomic analysis study to determine what specifically is “going on in the gut” of crickets and potentially increase feed optimization.

“If I know what they can digest easiest, I’m going to feed them that,” Bachhuber said. “But you can’t look at any animal as just itself, you have to know how it is interacting with its environment.”

“Oh, you’re about to learn more about crickets than you ever wanted to know,” Bachhuber laughed as he walked down the stairs leading out of his office and into the heart of Big Cricket Farms — a warehouse filled with rows of cricket troughs and large, zipped tents containing recent hatchlings.

“They like it about 80 to 90 degrees,” Bachhuber said. “There will be about 10 million babies in roughly two weeks and around 6 million will survive.”

In 10 more weeks, that will make for approximately 6,000 pounds of harvested crickets.

Each trough of crickets is fed and watered up to twice a day, and monitored almost around the clock.

“When you stare at crickets all day long, you can notice subtle changes,” Bachhuber said.

Bachhuber is hoping for a less subtle change in the general public’s view of eating insects.

Pointing to novelty foods as well as the use of, for example, the cochineal beetle in some food coloring, he said, “You’d be surprised at how many insects are already in food.”