This year’s Farm Science Review has begun, and Farm and Dairy is there covering the event.

Follow along with Farm and Dairy’s staff as they experience all 80+ acres of ag exhibits, talk with some of the review’s 130,000+ visitors, watch the field demonstrations and enjoy some of the food the exhibition has to offer.

Return back to see live updates from Editor Susan Crowell, Chris Kick, Kristy Seachrist and Brian Lisik. In the meantime, follow Farm and Dairy’s staff on social media, and check out our coverage from last year’s Farm Science Review.

Mike Haubner is inducted into the FSR Hall of Fame

The Farm and Dairy booth

Checking out the precision soybean planter

The program was created in 1984 to recognize Ohio farm families for their dedication to natural resources and their efforts to conserve soil, water, woodland and wildlife on the land they farm. The program has honored 161 farms. 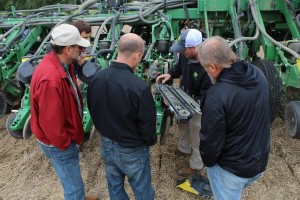 Reporter Chris Kick explains what “prescription agriculture” is and how seed companies are working to help farmers find the right seeds for their fields.

Reporter Brian Lisik caught up with Jill Tyson, coordinator of prospective student services at OSU’s CFAES, Linda C. Martin, associate dean of CFAES and an agricultural economics major to talk about the wide range of opportunities that students and graduates have by studying in the agricultural field.

Last day at this year’s @OhioStateFSR. A great show! Here’s another #shurcosighting on a Demco 1050 Cart. #FSR14 pic.twitter.com/Cl6aF3YheP

Team Dairy Club is armed and ready for the last day of @OhioStateFSR Visit us on Friday Ave! #FSR14 #milkshakemadness pic.twitter.com/fzRaoqOFlU

We’re at Farm Science Review again with our friends @OSUPlantPath! Come visit us and guess a few names of plants too! #FSR14

Don’t forget to check out the antique tractors at #FSR14, near the main parking lot. http://t.co/AfZ5650yLU

Another gorgeous day at the Molly Caren Ag Center – join us here for Day 3 of #FSR14; still much to see and learn! @OhioStateFSR #CFAES — Bruce McPheron (@medflygenes) September 18, 2014

Hold onto your grain 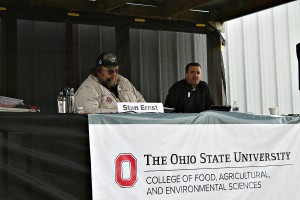 This is the way to do FSR!

Reporter Kristy Foster Seachrist interviews some attendees of this year’s Farm Science Review and shows a glimpse of the grounds. Watch the video.

From demonstrations and discussions to contests to activities, there’s a lot going on today at FSR!

Panel discussion on water quality at #FSR14. Keeping nutrients on the field and out of the water.… http://t.co/qCOjKEPIjh

We have a winner of the tallest stalk contest!! 14 feet 4.5 inches! #fsr14 pic.twitter.com/TWQTzj4Yfa

Look who stopped by the @farmanddairy booth at #fsr14! It’s @bdfholstein and son Doyle! pic.twitter.com/DQDIydTKib

Wyatt and Kolten, smile and say “Apache Sprayers are No. 1!” #FSR14 #ApacheFSR pic.twitter.com/lxKsvDUUQV

@RVFFA students get extra credit for getting my signature at #fsr14. they must have an awesome ag teacher pic.twitter.com/ByECnCOJQf

What is #FSR14 without a #selfie with our Dean! @medflygenes #CFAES #GoBucks pic.twitter.com/njvzY9DHk2

Are you at the @OhioStateFSR today? Stop by the Bailey Building to learn about our academic programs! #FSR14 #CFAES pic.twitter.com/t5SU3xyB6Q

If you’re at Farm Science Review and want to support Ag Ed Society, visit our students in the… http://t.co/yaoDoZySCr

You know what #FSR is — Farm Science Review! But how about ARC and PLC, from the new farm bill? #FSR14 panel. http://t.co/L7Lo8nRaEB

ARC, PLC and SCO. If you don’t know what these acronymns mean, reporter Chris Kick caught the farm bill discussion and explains what you need to know about programs for crop farmers.  https://twitter.com/marthafilipic/status/511841751343321088 #FSR14 has officially begun!

Editor @scrowell honored to be part of OSU Extension 100 Women in ag exhibit in Firebaugh Bldg at #FSR14 pic.twitter.com/zRPBIUAtbd

Reporter Chris Kick attended a discussion on the farm bill’s programs. Led by OSU ag economists and farm bill experts, the discussion focused on the differences between the program choices and what is best for the individual farmer.

Chris Kick covered the farm bill’s beginnings earlier this year when it was signed into law. 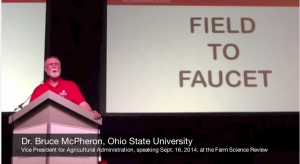 Prep well underway for #FSR14, as illustrated here at the corner of Kottman and Farm! http://t.co/iklf431Agt #CFAES @FarmScienceReview

We sold out of our FSR tickets, but you can still check local Extension offices or other agribusinesses:

And exhibitors are busy putting finishing touches on displays:

Set up and ready for a great @OhioStateFSR. Even got a few #drone flights in this afternoon! #FSR14 #AgTech pic.twitter.com/GzMyyGnNMW

Did you know there’s an app for that?