JEFFERSON, Ohio — Covered Bridge Gardens in Ashtabula County is not your grandfather’s farm. It’s not your father’s farm either. It’s a farm all of its own, and it’s not afraid to change.

The farm’s name comes from the red covered bridge spanning Mill Creek near Netcher Road where the farm sits. And just as bridges have changed over the years, so has the Covered Bridge Gardens Farm. On the wall of what was the old milking parlor where the bulk tank once stood, hangs a framed certificate from the Ohio Department of Agriculture that gave Michael Prochko Sr. the license to sell pansies in 1952. He sold the pansies before deciding to concentrate on the dairy business. 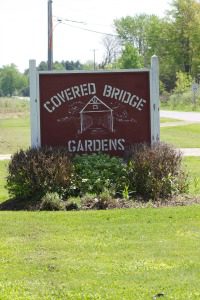 When Kay Prochko, his daughter-in-law, found the certificate in some old memorabilia, she said it made her think of how the farm had converted from the dairy business back to the vegetable and flower business — and the cycle of farm changes that have to be made to fit a business plan.

Covered Bridge Gardens developed its specialty as a dairy farm in the 1970s and 1980s. Then it merged with Bossy’s Way and served as the heifer facility while the milking part of the business moved. But it just didn’t suit the farm.

Steven Prochko, the farm’s third generation, had just returned from college where he studied dairy science. While the farm wasn’t a dairy any longer, it didn’t mean he wanted to stop production agriculture. It just meant the farm needed to change its plan.

In 2000, the Prochko family decided that fruits and vegetables, and working as a Community Supported Agriculture, or CSA, was the way they wanted to take their farm. At one point, they grew nearly 50 acres of lettuce, onions, peas, pumpkins, popcorn, flowers and other vegetables.

Fast forward to 2015, and the farm is no longer offering CSAs, has fewer acres of vegetables and is, instead, making a concentrated effort to increase soybean and corn acreage. And this year will be the first year without off-the-farm labor. It will just be Steven and his parents, Kay and Mick Prochko.

So far, the farm has tomatoes, lettuce, onions and peas planted for this summer, but the amount of each vegetable planted has decreased, and so will the overall number of products produced on the farm. The family is planting just enough vegetables and flowers to sell at two farmers markets this summer.

Steve Prochko is taking over the farm from his parents, and his goal is to expand the farm to 500 acres and focus on corn and soybeans. This year, the farm plans on planting 170 acres, the majority in soybeans and corn.

Steven said there is nothing he ever wanted to do besides farm. Growing up on the farm, he said it was the only career choice for him.

“I love being outdoors and doing what you want. It beats being in the office five days a week,” said Prochko.

Even with the lower grain prices, Prochko said it is still the way to go for the farm in order to turn a profit. When the numbers are crunched comparing the profit margin of corn and soybeans with vegetables and flowers, he said the grain prices win. Prochko explained that vegetable farming is more labor intensive, and requires additional help in order to get produce picked and out of the field. He added that some farms near Lake Erie can pool with grape producers and get labor from them to pick vegetables in the evening. Jefferson, however, is farther south, with a limited labor pool, which makes it more expensive to hire help.

Simply put, the vegetable portion of the farm needs labor, and the labor costs money. If you eliminate that need, Prochko said, you cut costs, which means additional profit. He said he has looked at the numbers, and he can still make a profit at $9 a bushel for soybeans. Corn is a little iffy for many farmers at $3 a bushel, and even $4, depending on ground rental prices. His goals include purchasing more land as it becomes available, a bigger planter and newer tractors.

Another reason for the transition back to conventional farming, is some forward thinking by Prochko — he can see regulations coming down the road, especially when it comes to handling the vegetables after they are picked. That addition cost will make the vegetable business plan even more unprofitable for the farm.

For Prochko, it’s also about a quality of life.

“It’s nice to have a Saturday or Sunday off in the summer,” said Prochko.

He said for the last eight years, he has spent every weekend all summer picking vegetables, so a little break would be nice.
Vegetable growing. Currently, the farm has two greenhouses on it and has converted a cattle feeder used in the dairy into a makeshift greenhouse for additional space.

Kay Prochko said the two greenhouses near the fields are used for growing tomatoes. She said they compost in the greenhouse so that the ground remains fertilized and helps grow the vegetables. She said she composts cobs from popcorn raised on the farm and other vegetables from last growing season.

The additional greenhouse is used for starting flowers and other vegetables. So far, Covered Bridge Gardens has 12 flats of sunflowers planted to sell at the farmers market. Other flowers grown on the farm will be zinnias and snapdragons.

The farm also features three hives of bees on it, and the Prochkos feel the bees contribute to the farm’s success in the vegetable and flower business. In addition, the farm plants its own popcorn, which is sold at the farmers markets. The farm grows it and even grinds some into cornmeal, which proves to be popular. 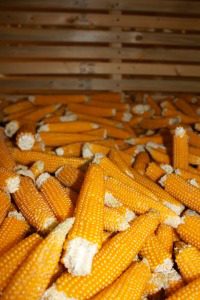 Kay said the vegetable portion of the farm is slated to run just from June through September, and there will be no fall vegetables this year, so the farm can concentrate on harvesting the field corn and soybeans in the fall. Covered Bridges Garden will be at the Ashtabula Farmers Market and the Shaker Square Market throughout the summer.

Like many farmers, the Prochkos are good at adapting what they have available in order to change as the market has dictated. For instance, besides converting the feed bunker, the farm has also created a walk-in cooler on the farm. The former milking parlor was transformed into a potato room by installing insulation on the walls and running an air conditioner.

Kay Prochko said it has been important to repurpose what the farm had in order to turn a profit. She said one thing they have learned is that you have to change. It’s like a marriage, she said. If you go into it thinking the other person won’t change, then the marriage might not make it because life changes everyone. The same thing goes for farming.

“You have to go into farming expecting change and accepting it,” said Kay.

She said while the farm is changing its business plan, it doesn’t mean she’ll stop educating the public about farming. She enjoys talking with restaurant owners and chefs about locally grown vegetables and planning menus around what is available at what time of year.

“We don’t think we are special. We just go out and do it every day,” said Kay.