MEDINA, Ohio — Since he was five years old, Russ Farnsworth had a good idea of what his life’s occupation would be.

He grew up on his family’s Medina County dairy farm, and that meant spending a lot of time around cows and farm equipment — but it also meant attending local auctions with his father.

And back on the farm, he’d practice his own auctioneer’s chant.

“Out here doing chores and stuff, I probably sold most of those cows two or three times and then I’d sell the tractors,” Farnsworth said. “It’s a wonder we got any work done.”

There were a few times when he tried to sell his sister, Amanda, but, he says jokingly, no one ever paid him for her.

Farnsworth, now 26, is a licensed auctioneer and realtor, and although he pretended to sell the family’s cows as a kid, the family still operates a dairy operation that includes 84 milk cows and more than 400 acres of crops.

Russ attended Reppert School of Auctioneering and has been a Realtor since 2008, working under the name Farnsworth Auctions.

He said the farm life gave him an edge when it came to selling farm items and tools, but along the way he’s learned a lot more, like how to sell antiques and collectibles, real estate and firearms.

In fact, he recently started a branch within his company, called Firearms Ohio. He sold about $200,000 worth of guns in 2014, and they’ve become a specialty for him.

Amanda, 23, attended the Vet Tech Institute at Bradford School in Columbus. She now works as a registered veterinary technician at All Creatures Veterinary Clinic of Rittman.

Like her brother, the farm life helped prepare her for her career.

“It taught us responsibility, it taught us to be self-motivated, self-sufficient,” she said. “It really just helped kick-start the basis for my entire career.” 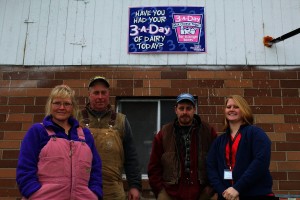 All Creatures only works on small animals, but if one behaves aggressively, Amanda said her co-workers often give it to her — figuring if she can handle cows, she can handle the misbehaving animal.

“You just grow up in this lifestyle,” she said. “You know it’s something you have to do and you learn not to be afraid of stuff, and to take on challenges.”

Russ and Amanda are both 4-H advisers, for the Sharon Livewires 4-H Club.

The farm has faced challenges over the years — including urbanization and development. Medina County, within an hour of Cleveland, experienced a rapid growth in housing in the 1980s that saw farms disappear and allotments take over.

According to the National Agricultural Statistics Service, the county had more than 170 dairy farms in the late 1970s, and today has only 44.

That’s had a big impact on the Farnsworth farm, especially for Russ and Amanda’s parents, Dave and Lorrie Farnsworth.

“Our biggest challenge right now is you never know what you’re going to be farming in this area — there’s so many houses and developments,” Dave Farnsworth said.

Dave said people often don’t believe him, but since he graduated high school in 1977, 23 different farms that they rented are now housing developments.

“You really never know what’s going to happen up here,” he said.

The one thing they can control is their own farm, which includes 196 acres, plus another 250 acres they rent.

The Farnsworths try to approach things with an even keel, and, as Dave Farnsworth puts it, some of the farm is a little “old-fashioned.”

There’s still ear corn in the crib and they feed grain in the milking parlor — a small double four. But things on the farm are paid for, and that’s part of their goal — to avoid debt.

“We’ve always showed profits,” Dave said, adding that naturally, “some years aren’t as good as others.”

Lorrie Farnsworth said they really don’t have a “farm philosophy” — instead, they just try to do things that work.

Dave and his family have milked cows in the same neighborhood for decades. His current farm dates back to 1962, and the herd goes back to about 1910, when it was started by Dave’s grandfather, Walter.

Dave’s wife, Lorrie, became a neighbor when she was just 8 years old. Her family moved to 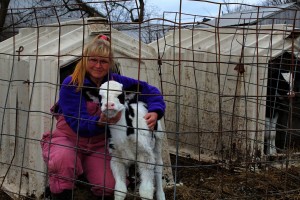 the area from Monroe Falls, an urban area, but it didn’t take her long to fall in love with the country life, and the neighbor boy.

“I’ve adjusted well,” she adds, and now helps with the milking and calf care.

There are no major expansions planned at the farm, but Dave Farnsworth said they plan to continue it at about the size it is today. In a normal growing year, they’re able to raise most of their own feed to support the herd.

Crops include about 65 acres of corn that is picked, plus corn silage, hay and 30-60 acres of small grains.

The Farnsworths do pride themselves on one recent technological advancement, a bale wrapper.

Russ Farnsworth said he was skeptical when his parents bought it — but he’s now the main operator. The wrapper reduces the amount of drying time the hay requires, and protects it from the weather throughout the year.

The Farnsworths also upgraded their milk tank to a sizable 2,000-gallon tank, which extends the storage time between milking and when the milk truck comes.

But getting bigger really isn’t the goal.

With their children now working most of their time off the farm, the Farnsworths are most interested in keeping the herd “self sufficient.”

That means balancing the cows with the acreage, and trying their best to grow their own feed.

“We’re at a pretty nice size and we’ve got enough land in a good crop year to support the dairy,” Dave Farnsworth said.