COLUMBUS — Growers who want to get their corn crop out to a good start this year should make sure they get it planted during the optimal corn-planting time, which in some parts of Ohio typically starts as early this week.

“We encourage planting at the recommended times because this is historically when you get the best yields,” Thomison said. “Planting later than these times historically has resulted in yield loss, in some cases a 30-bushel-per-acre reduction in yield.

“Growers historically could see a loss of a bushel to a bushel and a half in yield loss for each late planted day.” 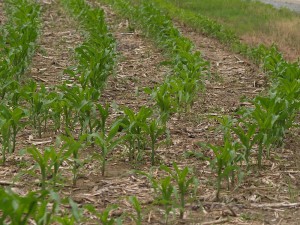 At mercy of weather

But some growers might be hesitant to plant early this year based on experiences many had with planting delays and drought the past two years, he said.

For example, wet weather conditions caused planting delays for many growers in 2011, but many were still able to produce good and, in some cases, better crops.

For some growers who planted early in 2012, crops were at critical development stages when drought conditions were most severe, with numerous 100-degree or higher days in early July when crops were pollinating, Thomison said.

That compares to growers who, because of planting delays, got their crops in later and had better crops.

“As a result, some growers may be a little gun shy at planting early this year or may be more careful and not plant as early as they typically would because of what happened the last two years,” he said.

“It’s human nature to reflect on what’s transpired in the past couple of years versus the historical perspective because of concerns many may have that we’re experiencing more weather extremes.”

If you can, plant

But the generic recommendations are that if growers have fields that have good soil conditions, are dry and suitable for planting, with warming temperatures over the next week to 10 days, it behooves them to start planting, Thomison said.

“Mistakes made during crop establishment are usually irreversible and can put a ceiling on a crop’s yield potential before the plants have even emerged,” he said.

In addition to planting at the proper time, Thomison said growers can minimize risk by:

♦Performing tillage operations only when necessary and under the right soil conditions. It is important to avoid working with wet soil and to reduce secondary tillage passes, which could cause shallow compaction and reduce crop yields. The best time of year for deeper tillage is during the late summer and into fall on dry soil, and only when a compacted zone has been identified.

♦Adjusting seeding depth according to soil conditions. Corn should be planted between 1.5 to 2 inches deep, which provides protection against frost and allows for adequate root development. Seed depth should be adjusted for weather and soil conditions.

♦Planting a mix of early-, mid- and full-season hybrids between fields, which reduces damage from diseases and environmental stress at different growths stages. Using this method also spreads out harvest time and workload.

♦Planting full-season hybrids first, followed alternately with early-season and mid-season hybrids, which allows the late-season hybrids to get the most benefit from maximum heat unit accumulation, Thomison said.