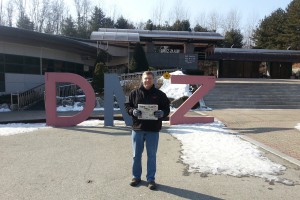 Bill Martig, of YESCO Electrical Supply, Youngstown, Ohio, took Farm and Dairy on his recent business trip to the U.S. Air Force Base in Osan, South Korea. This photo was taken at Tunnel No. 3 in the de-militarized zone, or DMZ, the buffer zone between North and South Korea. Troops are stationed on either side of this buffer, in case the other decides to attack. Tunnel No. 3, Martig says, is one of four tunnels that the North Korean soldiers hand dug under the DMZ in an effort to invade South Korea. The tunnels were more than 16 stories under the DMZ and were hand dug through solid rock and granite.

Topsail Beach with the Rhoades

On Safari with the Tootles and the Marhefkas

At the base of Chichen Itza with the Frews