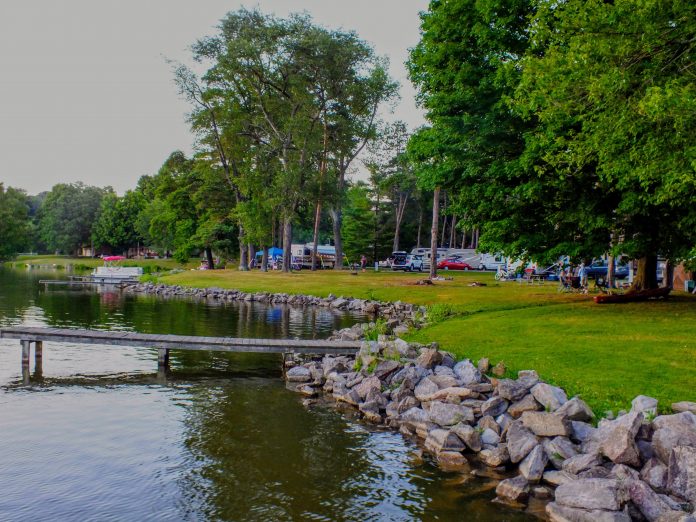 Russ Potts, of Wellsville, 68, has been camping at Guilford Lake State Park in Columbiana County every year since he was a child. Later, his wife joined him, then their children, and now their grandchildren.

For Russ, a disabled Vietnam veteran, it’s always been a place that provides peace and quiet, the beauty of nature and the joy of being with family. And that’s still the case, he says.

But this year, there are some differences in camping due to COVID-19.

“There’s a bunch of us who have this place in common,” said Lori Potts, who created a Facebook page called Friends of Guilford Lake. “You get used to seeing the same faces.”

This year, she said, perhaps 40 to 50% of the campers they see are new faces. And many of them are new campers.

“You can tell by all the boxes for new camping equipment that you see in the dumpsters,” she said.

Her cousin, Cheryl Howard of Glenmoor, agrees with Lori’s estimate. Cheryl and her husband, Bob, have served as camp hosts at Guilford for the past nine years, welcoming visitors, answering questions and cleaning fire pits and the 42 campsites after the campers leave.

As hosts, they get updated lists of who is renting those sites. This year, about half the names on the list are unfamiliar, she said.

And unlike other years, those 42 campsites are sold out every weekend.

What they are seeing at Guilford is part of a national trend: More people are camping because they see it as a safe way to get away during the COVID-19 crisis. Many of those people are new to camping, and some are in a younger age group, who may be “glamping.”

Those who work in sales of campers and travel trailers, like Tyon Brown of Dave Arbogast RV Depot in Troy, are hearing that RV sales are up 250 to 300%. And they’re seeing it in their day-to-day business.

“There was a big spike in sales when the shutdown happened, and since the re-opening, sales have been fantastic,” Brown said.

It’s to the point where inventory is “down to almost nothing” and replacements, most of which come from manufacturers in Elkhart, Indiana, will be a long time coming.

“Certain units we won’t see till next year,” he said. “Those who’ve already ordered won’t get them until November.”

Along with Guilford Lake, state parks with campsites are seeing the results of those RV sales, along with people who just camp the old-fashioned way, in tents or pop-up trailers. ODNR statistics show that overnight stays were up nearly 13,000 in June compared to the same month last year.

Last week, Lora White was serving as acting district manager for the 10 state parks in the ODNR’s central district. She said state park camping areas were closed because of the COVID crisis but re-opened Memorial Day weekend with extra sanitation measures in place. Since then, they have been flooded with reservations, 90 percent of which were done online.

“The best way to put it is that weekends are like holidays used to be, and weekdays are like weekends,” she said. “It’s been very, very busy.”

White said the Alum Creek and Mohican state parks are “constantly packed,” along with private campgrounds like the Cardinal Center, which is right off Interstate 71. Mt. Gilead State Park, where she is stationed for her regular job as park watercraft manager, has been getting the overflow.

“All the park managers say they’ve been getting nothing but positive feedback,” she said. “People say how grateful they are that the parks are open and the campgrounds are so well taken care of.”

Mike Till, general manager of Poor Farmers RV Sales, Service and Campground, Inc. in Miami County, said he has seen a similar increase – especially on weekends – since their campground re-opened in April.

Poor Farmers is named for its founder’s CB handle, Till said. The late Carl Springer was a farmer who began allowing folks to camp on his land near Fletcher in 1969, adding RV sales and service in the 1980s. The campground has 150 overnight sites that are first-come, first-served. They’re usually taken by folks on their way to or from other places, like Florida.

“Normally I know who they are,” Till said of the overnight campers. “But each week I’ve been seeing 10 or 15 who’ve never been out here before.”

Poor Farmers also has 250 “permanent” sites that are rented year round. This year, more of those have been rented to people who live less than an hour away including, ironically, some farmers.

“They want to get away, but they don’t want to go too far,” Till said. “They go home morning and evening to feed their animals.”

The Howards say they have seen that trend of people camping closer to home at Guilford Lake. Tony Schillig and his wife, Brenda, who live in Stark County near Louisville, say that is what prompted them to book a prime spot right on the lakeshore.

“We’ve gone camping in state parks all over Ohio, but we were looking for something closer to home,” said Schillig, who was trying his luck fishing just before sunset.

“I feel safe,” he said. “Camping is one of the safer things you can do because you’re outside.”

Guilford has also seen the trend of more young people camping. The camp hosts say there have been groups of young men in their late teens and early twenties, not glamping but using tents.

Meanwhile, some in the older age groups are missing.

“A lot of the regulars are older, and they’re staying home,” Lori Potts said.

There have been other changes because of COVID. Until last week, the playground at the camp had tape around it. Now it’s open, but hardly any children are using it, seeming to prefer bicycles and scooters. Kayaks and paddle boats are no longer available for rent.

There are no Saturday night movies for the kids, for which Lori and Cheryl made and sold popcorn. They used the proceeds to buy Halloween candy for the Fall Fest at the camp, which they’re not sure will happen this year.

And while campers don’t wear masks, they do social distance.

“Everybody’s friendly, everybody stops by and we chat, talk about our dogs,” Lori said. “We have a conversation, but everybody’s doing it from a distance.”

Another change is that fewer people are using the shower house, instead opting for facilities in their RVs. And they’re not leaving their campsites to gather around large campfires, like they used to.

Despite the changes, Russ Potts finds camping at Guilford just as relaxing and enjoyable as he did five or six decades ago. A daughter from East Liverpool just bought an RV, so Russ and Lori get to camp with their grandchildren ages 13, 10, and twins, 11.

“Our grandkids, this is what they live for,” Russ said.

Truth be told, so does he.

The changes that campers are seeing in Ohio are part of a national trend.

Kampground of America (KOA) did a “COVID-19 edition” of the North American Camping Report, surveying leisure travelers between April 27 and 30.

The report concluded that “the camping industry may rebound sooner than other forms of travel and may even gain strength later in the year, due to its consideration as a safe way to resume travel among COVID-19 health precautions.”

Other conclusions from the survey include the following: