Opening day of this year’s Ohio gun season for whitetail deer was a disappointment for thousands of hunters.

Harvest numbers for the heavily anticipated day, which is typically the best day of the weeklong season, was just 17,500, down nearly 23 percent from 2013 when hunters tagged 22,619 deer.

The lower numbers represent a goal by Ohio’s wildlife officials to reduce the overall herd, especially in counties where too many deer caused concerns to some stakeholders. It appears that lower deer seen and lower deer harvested in many counties is the present and the future for hunters.

Overall, hunters took 191,459 deer in 2013 including those reported in all seasons; gun, muzzle loader, and archery. This year’s grand total will be less than that but even with planned reductions in the state’s deer population, Ohio continues to be a popular and productive deer hunting state. 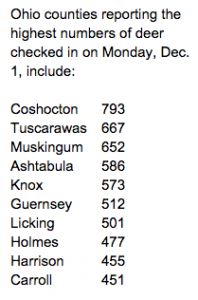 According to information released by the Ohio Division of Wildlife, officials are committed to managing the state’s deer populations through a combination of regulatory and programmatic changes.

The goal of Ohio’s Deer Management Program is to provide a deer population that maximizes recreational opportunities while minimizing conflicts with land owners and motorists. This, they suggest, ensures that Ohio’s deer herd is maintained at a level that is both acceptable to most and biologically sound.

Deer management, in layman’s terms, always means the reduction of animals by legal hunters or in some instances, by paid sharpshooters in non-hunting areas, and the issuance of nuisance permits. It also means the harvesting of does, a practice that is far more effective in reducing numbers than the killing of bucks.

DOW officials added that until recently almost all Ohio counties were above target management numbers for deer. In the last few years those numbers have been reduced through increased harvest and dramatic strides have been made in many counties to bring deer numbers closer to the goal.

Because Ohio’s management practices can and do change year to year and county by county, officials are hoping to maintain target goals once reached.

Rifles allowed are limited to those that shoot straight-walled cartridge calibers, basically the same calibers already allowed for handgun hunters. Typical rifle calibers are .44 Magnum, .444, and 45/70.

Interested Ohio shooters can look forward to May 29, 2015 when the 8th annual Western Reserve Friends of the NRA Banquet will be held in Mentor, Ohio.

For information about discounted advance ticket, rooms, and reserved tables, should email Chairman@WesternReserveFNRA.org.

Layer up and make some winter memories