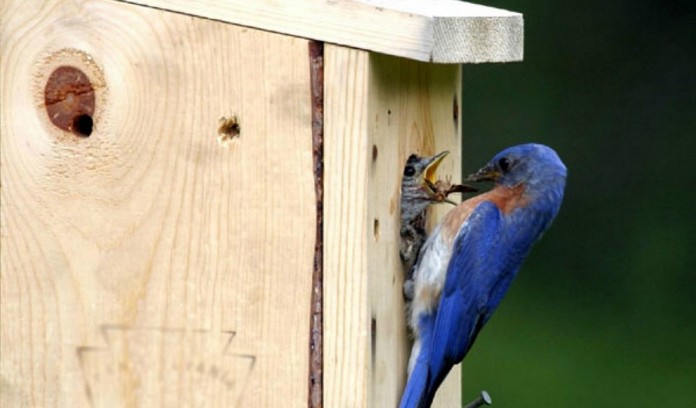 “Poppi, did you bring the birdhouse?” Garek asked.

When I arrived at my daughter Nora’s house in western North Carolina last week, my 5-year old grandson Garek was bubbling with excitement. He obviously remembered my promise to bring him a bluebird box.

When I visited back in February, I told Garek I saw and heard bluebirds near his house. They live in a subdivision with scattered tall trees in most of the front yards.

I told him it’s perfect bluebird habitat, and if he put up a bluebird box, bluebirds would surely use it. Garek took the bait and asked if I would bring him a box the next time I visited.

The day after I arrived Garek asked if we could put up the box. I said sure, but first I had to explain a few things.

We sat at the base of the tree where we would hang the box. The reason to put up nest boxes, I explained, was that dead trees are in short supply.

In suburban neighborhoods, dead trees (snags) are unsightly and quickly removed. Nest boxes provide nest sites for cavity-nesting birds such as bluebirds, chickadees, titmice, and wrens that would otherwise use abandoned woodpecker cavities.

Next, I explained that the hole size was exactly 1.5 inches in diameter. This is big enough for chickadees, titmice, wrens, and nuthatches and the perfect size for bluebirds, but too small to admit destructive European starlings.

The next step was to actually hang the box. When I use a live tree to mount a box, I strap it to the trunk about five feet above the ground with copper electrical wire.

Twisting the wire ends on the back of the trunk secures the box. And then each spring I loosen the wire a half twist so the wire does not girdle the tree. This ensures that the flow of sap and water up and down the tree is not interrupted.

After hanging the box, 5-year old Garek made a comment that absolutely amazed me.

“Won’t the wire squeeze the tree to death?” Garek asked. Though he could not tell me how he understood the concept, I explained to him how water and sap flow up and down the tree, and why it’s important to loosen the wire annually.

Clearly, Garek was paying attention and putting some thought into this.

Now that the box was attached to the tree, I explained that it could be days, maybe weeks until bluebirds found the box. I didn’t want to raise his hopes too high.

For the next three hours, Garek asked to check the box every 10 minutes to see if a bluebird had started building a nest. Again, I told him that it would take some time for bluebirds to adopt the box.

The next morning Garek came squealing into my room. “I just saw a bluebird go in and out of the box!”

I wanted to believe him, but I thought he might be guilty of wishful watching.

After breakfast, Garek kept asking to check the box to see if any nesting material had been added. And again, I stressed that he needed to be patient. But I certainly preferred his enthusiasm to indifference.

Later that day Garek was playing outside with his brother and father, and I was sitting on the porch. Suddenly I noticed a bird perched on a branch about 10 feet above the nest box.

It was a male bluebird. And about 15 feet above perched a female. I could hardly contain myself.

“Garek!” I whispered as loudly as I could. After several attempts, Garek and his dad heard me and came out just in time to see the birds fly away.

I knew they had actually seen the bird because Garek’s dad remarked on the bird’s incredible blue hue. I told Garek I should not have doubted him.

He had indeed seen a bluebird earlier in the day. Now it was just a matter of time.