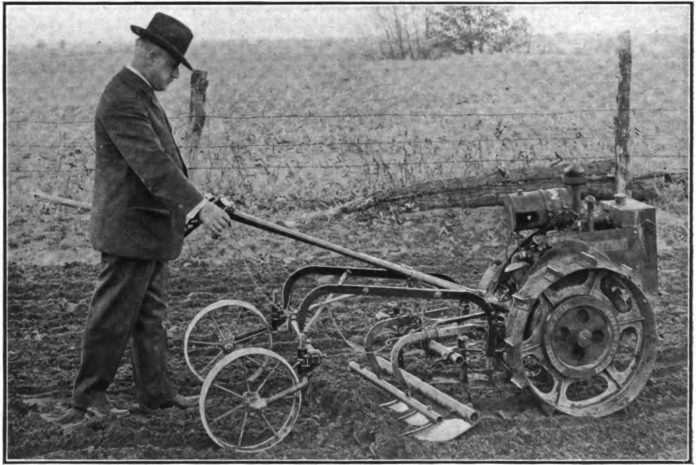 From the days of the early settlers in this country and probably well into the 19th century most folks raised their own fruits and vegetables; even most of those who lived in towns and cities had a backyard garden.

Someone once said that if did your tilling with a hoe, it was “gardening,” while with a plow it was “farming,” although my grandfather might not agree. He hoed untold acres of field corn during his 96 years.

Eventually, some farmers, especially those who lived near cities, began to specialize in raising produce to sell, often transporting it into the city and selling it themselves.

This kind of farming became known as “market gardening,” or “truck farming.”

Interestingly, the “truck” in “truck farming” has nothing to do with hauling the stuff to market, it’s from an old French word “troquer,” which means to barter or exchange.

Although many truck farms weren’t of large acreage and might have been worked by hand, some were quite large and required the help of horses or mules.

These larger truck farms were candidates for tractors when those machines were first introduced in the early 1900s, but the smaller operators felt they couldn’t justify the expense, even though they may have had a hankering to mechanize.

Of course, this represented a potential demand and someone tried to fill it.

One of the earliest “garden tractors” was invented by Cornelius A. Peters and patented in 1915. The patent was assigned by Peters, half to Edwin R. Beeman and half to P.J. Lyons and became the Beeman garden tractor.

Before establishing the Beeman Garden Tractor Company in Minneapolis, Beeman had been employed as a vice president and general manager of the Monitor Drill Company, which had been bought by Moline Plow Company in 1909, and he had several grain drill related patents to his name.

Beeman advertising informed potential users that “Large tractors are made for the large farms. The Beeman Tractors meet the more modest, but just as important demands of the small acreage worker. To this class of producers, the Beeman can be a great help and comfort.”

One of the firm’s slogans was “There is No ‘Irk’ in Work With the Beeman.”

The August 1918 issue of Tractor World, did a feature article on the Beeman Light Garden Tractor, calling it “A type designed for cultivating small areas and serve (sic) as a general power plant.”

The Beeman was guided by an operator who walked behind it and was especially suited for the narrow rows of vegetable gardens, as it could be driven astride narrow rows or between wider ones.

The two drive wheels were 25 inches in diameter and 3 inches wide, with a vertical, one-cylinder, 4-cycle, engine “of our own design and make,” with a 3 by 4-inch bore and stroke.

It was said in the Tractor World article to be guaranteed to produce 1 drawbar and four belt horsepower, although a Beeman sales brochure claimed five horsepower.

The engine was water-cooled by a thermo-siphon circulating system, plus a fan and radiator.

Two long tubes angled upwards from the rear of the tractor frame and culminated in crossbars with drop down handles for the operator to grip while operating the machine.

The clutch lever was located on the left handle and the throttle on the right one.

A small, two-wheeled trailer not only supported the rear of the tractor, but served as a hitch point for some pulled implements, as well as a toolbar for many of the tillage, planting and cultivating attachments available from Beeman.

Some ride-on horse-drawn implements, such as a mowing machine, required the support trailer to be removed and the shortened implement tongue attached directly to the tractor frame.

In this case, the operator sat on the implement seat where he could easily reach the tractor control handles which were adjustable for height.

Two special plowing trailers were available that allowed an ordinary horse walking plow to be used behind the Beeman tractor.

One of these was offset so both tractor wheels stayed on the unplowed ground, while the other was narrower and required the one tractor wheel to run in the furrow.

A lever was provided to raise the plow on the trailer and to set the working depth.

In 1920 a good draft horse or mule probably cost between one and two hundred dollars and needed maybe another hundred per year to keep it, so Beeman advertising made much of the economy of their tractors.

One sales brochure stated, “Horses are a big care and require about all you can raise to feed them,” and pointed out that the Beeman “costs only when at work,” and claimed that one gallon of gasoline would “serve for five hours fieldwork and seven hours belt work.”

The agricultural depression in 1920-21 hurt Beeman badly and they declared bankruptcy in 1924. After reorganization the firm, now called The New Beeman Tractor Company continued in business until World War II, putting an end to operations in 1942.

During these latter two decades, no new products were developed and Beeman apparently sold enough old-style tractors and spare parts to keep afloat.