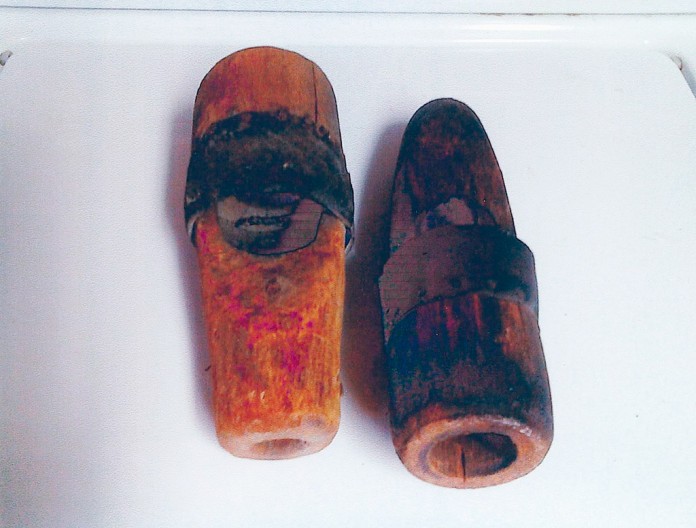 Hello from Hazard!
Our Item No. 1060, shared by Ralph Farnsworth, of New Haven, Vermont, got a quick response from David and James Miller, of Louisville, Ohio, who say it’s used to cut seed potatoes.
Farnsworth had told us a slightly different use, but we’re thinking the Millers are correct. Ralph said it was used to chop potatoes into square chunks to feed animals. The bottom tray on a slant would shake to move the chunks into a bucket.
We found a similar photo online on the website of the Artefacts of Prince Edward Island Community Museums, calling this a potato set cutter. (PEI has a large potato production that continues today.) According to the museum’s website, our cutter was “used to cut potatoes into sections, called ‘sets’ that were later planted for the next year’s potato crop. Whole potatoes are used to make ‘sets’, each set is a section of a potato containing at least 2-3 eyes.
Farnsworth’s photo looks identical to their model, which they identify as a potato cutter “manufactured by a man named, L.A. Aspinwall, between the 1890s to the 1920s. L.A. Aspinwall was the founder of the Aspinwall Manufacturing Company. L.A. Aspinwall started off in the potato machinery business when he designed and developed a new type of potato planter in 1861.”
“After 20 years of work, Aspinwall had successfully sold a few of his planters. With this encouragement, L.A. Aspinwall opened a factory in Three Rivers, Mich., in 1884, selling 50 planters the first year.
“L.A. Aspinwall’s business continued at Three Rivers until 1891 when the company moved to Jackson, Mich. By 1900, the firm was building potato planters, sprayers, cutters, sorters, weeders and diggers. The company also introduced a two-row potato digger, powered by a gasoline engine in 1919. Aspinwall had the most competitive line of potato machinery anywhere in the world at the time.”

Item No. 1061, our next item to test your skills, comes from James Turvey, of Mechanicstown, Ohio. They’re both the same item, but one measures 2-1/2 by 8 inches; the other is 3 by 8-1/2 inches. They’re both made of wood and leather, with tacks holding the leather in place.
Know how these were used? Email responses to editorial@farmanddairy.com; or respond by mail to: Hazard a Guess, c/o Farm and Dairy, P.O. Box 38, Salem, OH 44460.

And if you have an item for Hazard a Guess, send a 35mm photo or high resolution digital file, along with a description as to size, use and markings, and send it to the address listed above.