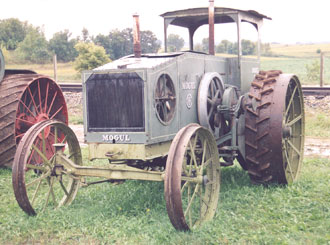 Here we go with another bright and shiny new year; I wonder where we’ll all be at its close.

To start off 2012, here’s the story of a tractor that was bright and shiny and new 100 years ago. Nineteen-twelve was the year that the International Harvester Company introduced the International Mogul 12-25, IHC’s first lightweight tractor.

Even though the Mogul 12-25 weighed almost 5 tons, it was a whole lot lighter than the huge, clumsy machines that IHC had been building up until then.

The Mogul 12-25 was also the first IH tractor to feature automotive-type steering instead of the clumsy old chain and worm gear type used on steam traction engines and most early gas tractors.

The new tractor was longer and lower and was enhanced by a front mounted, automotive-style radiator and tin work enclosing not only the engine, but the driver’s platform as well, which was also covered by a square cab.

Built at the new Chicago Tractor Works, the 12-25 was powered by a kerosene-burning, two-cylinder opposed engine with an 8-inch bore and a 7-inch stroke. One cylinder faced to the front of the machine and one to the rear, and there was a mixer, or carburetor, for each cylinder, as well as separate exhaust manifolds and upright exhaust pipes, one at the rear of the hood right in front of the cab and the other toward the front.

Prior to the 12-25, IH tractor engines had been designed to run at the snail-like pace of 200 to 375 RPM. The New Mogul’s engine was almost twice as fast at 550 RPM, giving it a lot more power for its size. Earlier machines had also relied on the engine exhaust to pull cooling air over the water in the radiator, while the 12-25 had a belt driven fan for this purpose.

Instead of the crude open-gear drive train that was common before, the new Mogul featured an enclosed chain drive to each rear wheel, driven through a two-speed, sliding gear transmission and a disc clutch.

The relatively high speed (4 mph) of the top gear made the 12-25 useful for road transport, while the low, or plowing gear, was 2 mph. Between its introduction in 1912 and end of production in 1918, a total of 1,549 Mogul 12-25 tractors were built, with a reported 341 of these being exported to Great Britain.

In 1915, the machine sold in the U.S. for about $1,350 and in England for 550 pounds. There was a large flywheel outside the engine hood on each side of the tractor. On the right flywheel was mounted a belt pulley, while a hand crank starter with a friction pulley that ran against the left flywheel was on the other side.

The Mogul was said to be easy to start; first the mechanical oiler was given 40 or 50 turns and a hand pump was operated to fill a feed cup on each cylinder with gasoline. The magneto was retarded and a decompression lever thrown. Each mixer was primed with gas and the fuel needle valves set to the start position.

The hand crank was turned until the engine fired, at which time the decompression lever was closed, the spark advanced, and the needle valves adjusted. When the engine was warm, the fuel valve was changed over to kerosene — and away you went!

Sounds really simple, doesn’t it? According to one source, there are 16 surviving examples of the Mogul 12-25, with just five of these in the United States. The others are five in the UK, one in Belgium, one in Ireland, and two each in Canada and New Zealand.

I’ve seen the one at Rollag, Minn., which appears to be in pretty good condition, except that it’s missing the friction starting crank. As some of you know, the International Harvester Company used both Mogul and Titan as names for many of their engines and tractors from shortly after the 1902 merger until around 1920.

Each of the separate firms that took part in the merger that resulted in the mighty IHC Company retained their individual dealers and had lots of loyal customers. Therefore, it was thought best to maintain a distinctive implement line for each one that, although similar, could be easily told apart.

Thus, the McCormick dealers sold the Mogul line, while Titans were handled exclusively by Deering agents. By 1920, the added expense of maintaining two or three dealers in each town, in addition to the huge amount of spare parts necessary for all the different machines, led IH to consolidate.

The strongest dealer in each town was chosen to be the only one, and implement lines were consolidated as well. The best features of each different design were retained and during the early 1920s the famous McCormick-Deering line was born. So the Mogul 12-25 was actually just a minor blip on the International Harvester screen.

Still, it was a modern tractor for its day, and was one more step as IH progressed toward the revolutionary Farmall which dominated the tractor world for almost half a century.