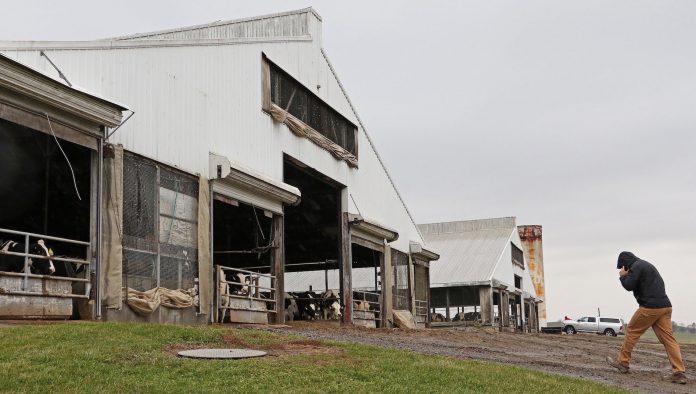 “My dad was a young man starting out on a rented farm near Vincent, Iowa. He didn’t have a penny to his name, but he had a big dream and an even bigger plan for making it happen. He had started out with outdated machinery abandoned by successful neighboring farmers; other necessary equipment was borrowed in exchange for his toil. Over the years he’d pieced together what was needed to ‘farm the farm.'”

— Bettie Youngs, Values from the Heartland — Stories of an American Farmgirl.

While reading this book, written by Bettie Youngs, I couldn’t help but notice many similarities to so many farm families I have known over my lifetime.

She notes that among her father’s few assets when returning home from service in World War II were “a strikingly beautiful young wife, three healthy children and one on the way.” She remembers those early years in which her father was working so hard to build a farm as wonderful years for their family.

“My mother and dad were happy and optimistic. It was during that time that he made an enormous decision for a man weighted under so much responsibility. He decided he wanted a larger scale operation.”

It meant that this man needed financial backing to accomplish any of it. This was in an era when a man’s character and integrity served as his collateral. His relationship with his banker became one of mutual respect and trust.

“Art Swasand, the banker at the Farmer’s Savings Bank in Vincent, was an honorable man who believed in honorable men. He did business the old-fashioned way himself; a client’s character was an important part of the deal.”

I recall this same sense of partnership and honoring of loyalties from so many individuals that my dad dealt with over the years. He revered those who made his business success possible, and the banter was friendly, with life-long agreements often sealed at our kitchen table.

I recall, in particular, one day when a man stopped by our dairy barn to talk to my dad about changing milk haulers.

After listening to the man tell how he could pick up our milk and haul it to a dairy plant for less money, putting more profit in the farmer’s pocket at the end of the month, I stayed busy changing inflations in the milk house while curiously watching to see what my dad’s reaction would be.

He lit his pipe. He always lit his pipe when he was contemplating his words carefully. It was a gesture that we knew all too well.

Dad slowly and carefully repeated the man’s words back to him.

“That’s right, that’s right,” the man said enthusiastically. He felt sure he had sewn up my dad’s business.

My father then proceeded to tell this gentleman that he was loyal to the family that had picked up his milk, without fail, ever since he started with a string of six Holsteins, putting milk in cans in those early years.

“We’ve had blizzards, floods, all kinds of challenges, and Junior Paullin has never let me down. That’s worth more than a dollar or two at the end of the month. So you don’t need to bother stopping back here ever again. He has my business until I no longer have any milk to ship,” he said.

It was a lesson in loyalty. It was a day I will never forget. I have carried that lesson with me, into situations both weighty and seemingly insignificant. I learned from my dear dad that loyalty is never insignificant. He taught us our word of agreement was meant to seal an unbreakable bond, and that a handshake brought life-lasting, mutual respect.

Because of my upbringing, those who knew my parents granted my siblings and me respect, something I have learned to value beyond measure. I have tried hard to live my life to earn that respect, not only for myself, but for my father’s legacy.

Breaking that, from my vantage point, would be the one true unforgivable sin.