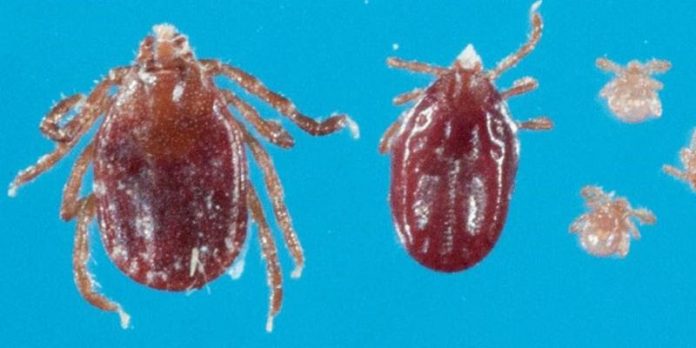 You may have heard about a new(ish) tick to the U.S. The Centers for Disease Control recently published a news release on the spread of the Asian longhorned tick (Haemaphysalis longicornis), which is now found in eight states: Connecticut, New Jersey, Virginia, West Virginia, Maryland, North Carolina, New York, Pennsylvania, and Arkansas, and it is right next door to Ohio.

Researchers suspect this tick has been in New Jersey since 2013 even though it was first confirmed on sheep in the U.S. over a year ago. Much about this tick is unknown — it is the first new tick found in the U.S. in roughly 80 years. Unfortunately, since this tick has yet to be studied in its new environs, much is unknown about its ability to transmit disease and how well these populations are able to survive the winter.

What we do know is that this tick has a three-host life cycle. Hosts currently identified in the U.S. include cattle, horses, sheep, goats, white-tailed deer, opossums, raccoons, and dogs, although it has been found on birds and smaller mammals in other parts of the world.

Egg laying is dependent on temperature, humidity and access to hosts, although this stage usually occurs late in the spring into early summer.

Longhorned ticks have a preference for areas with high humidity near the ground and tall grass — conditions you will often find in your pastures and hay fields. Eggs are laid in the soil, not on the host.

Larvae, which are newly hatched ticks with six legs, will “quest” for hosts from vegetation — that is, they will climb up a plant, extend their front legs, and wait until an unsuspecting host wanders by. Once they burrow their mouthparts into their host, these ticks will feed for a few days before departing and then molt into the next life stage where they will overwinter (nymphs).

Nymphs, which by this stage have eight legs, will molt into the eight-legged adult ticks after a second blood meal in the spring. Adults need to feed on a third host for 1-2 weeks before they can lay eggs.

In some parts of the world, the adult stage can coincide with the immature stages, depending on the duration of winter.

Something else that makes this tick unique among other ticks in the U.S. — females can reproduce without mating in a process known as parthenogenesis. This is the primary mode, if not the only mode, of reproduction in U.S. populations. Females can lay ~2,500 eggs over the course of a few weeks.

Because of its ability to produce many individuals within a single generation, thousands of ticks can aggregate on livestock, wildlife, pets, and in the environment.

Cows in other parts of the world have been known to die from blood loss due to the number of these parasites feeding on them.

Aside from anemia, ticks can cause weight loss, reduce milk production and wool quality, and transmit disease.

The longhorned tick is native to Asia and was brought into Australia (via cattle) and New Zealand (where it is known as the NZ cattle tick) in the 1800s.

This species has been identified on animals entering the U.S. before, but it is thought that not until the last few years did populations of the tick become well- established.

Other ticks belonging to the Haemaphysalis genus, such as the rabbit tick and bird tick, are native to North America but often have a specific host.

It can be tricky to tease these species apart by appearance alone, but ticks in this genus found on livestock are likely to be the longhorned tick. This tick, much like the black legged (deer) tick, is small, making it easy to miss in a search.

We also know that in other parts of the world, this tick has been associated with the following diseases: anaplasmosis, babesiosis, Japanese spotted fever, ehrlichiosis, Powassan virus, and theileriosis in humans and/or livestock. Many of the pathogens that cause these diseases have been found in other tick species already present in the U.S., but it is unknown if this tick can vector native strains.

Prevention goes a long way for control. Make sure to regularly check your livestock and yourself for ticks. Mow or graze areas with tall grasses, keep weeds under control, and maintain field edges by removing woody debris.

Fence off a distance of about 10 feet from wood-edge habitats, as this is where ticks are more likely to attach themselves to livestock.

Products are available to treat perimeters in some cases where ticks are present, but some of these require applications be made by a licensed applicator.

Treat clothing with permethrin or use repellent products containing ingredients such as DEET.

For some livestock, options may include treatments with permethrin products that can protect individual livestock from ticks. However, it is important to keep in mind that these ticks will spend very little time on animals and most of the time in the soil or on vegetation, limiting the ability of topical acaricides to reduce tick populations overall.

Always read and follow the label on any pesticide product, and consult a veterinarian for specific recommendations for animals.

To collect ticks for identification, use tweezers or tissue paper to grasp ticks gently and slowly pull until the tick releases. Do not jerk or twist as this may leave behind the tick’s mouthparts in the skin.

Avoid removal with hot matches, alcohol, and other substances that will cause ticks to regurgitate back into the wound and increase the risk of disease transmission. Use an antiseptic to clean wounds after tick removal, and place ticks in 70% ethyl alcohol.