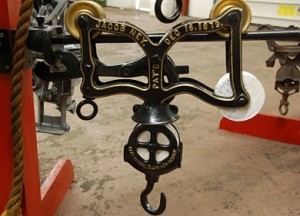 PHOTO ABOVE: This hay carrier, owned by Gideon Troyer, from near Ashland, Ohio, is based on Jacob Ney’s original 1879 patent.

On April 29, I traveled to the Ashland County Fairgrounds for the sixth annual Hay Tool and Swap Meet put on by the National Hay Tool Collectors Association. There wasn’t a huge crowd there, but there were some serious collectors in attendance.

An auction of items brought in by club members took two or three hours to complete and lots of rusty (and a few painted) hay carriers, forks, and other items were hauled away by proud new owners.

In 2010, the event was at the same place and the hay tools made by the F.E. Meyers Co. of Ashland were featured, with a large display of all the many different items made by that firm. This year the feature was Ney brand equipment that was manufactured in nearby Canton, Ohio, and again, there was a staggering array of Ney products.

As I’ve mentioned in the past, Canton was a beehive of farm equipment manufacturing during the latter half of the 19th and the first half of the 20th centuries, with threshers and reapers, plows and other tillage tools, hay mowers, rakes, and other hay tools all made there.

There were two different Ney companies in Canton, both making hay tools such as barn hay forks, carriers and track. The connection between the firms is murky, although it appears that both sprang from the same source.

One, the Ney Manufacturing Co., was located on High Street S.W., at the junction of the Ft. Wayne and Valley Railways. According to a copy of an undated Ney catalog in my collection, the firm made hay forks, hay carriers and tracks, hay fork pulleys and sundry hooks and hangers for hay carrier track, along with American sickle-edge hay knives, Automatic lawn rakes, children’s hand sleighs, and many other hardware items.

They also made a full line of barn equipment such as stanchions, watering bowls, litter carriers, and ventilating systems.

The V.L. Ney Hay Tool Co., on the other hand, was at 906 Spring Avenue N.E., in Canton, and their catalog lists hay forks, carriers and track, as well as the associated pulleys and hangers.

Inventions, patents. The Ney Manufacturing Company began with a hay elevator and conveyor invented and patented by Jacob Ney of North Industry, near Canton.

“The inventor of Ney’s Patent Lever Hay Elevator and Conveyor, having for years engaged in building and putting up hay elevators, found that most of those in use did not properly perform their work, and failed of giving satisfaction to the farmers employing them. He therefore set at work to invent an elevator that would embody all the advantages and avoid the defects of those heretofore in use. This he claims to have done in the invention which we describe in this article.”

A detailed description of the inner workings of Ney’s invention follows and the article ends with the statement: “These elevators are manufactured by Messrs. Ney & Kinney, at Canton, Ohio.”

So far, I’ve found no additional reference to a firm called Ney & Kinney in Canton during the 1870s or ’80s.

Another history of Stark County also tells us that Jacob Ney invented the first successful steel-track hay carrier in 1879. However, this author makes no mention of anyone named Kinney, but tells us that after Mr. Ney left his patent attorney’s office, he showed his patent to Johnson Sherrick and Harvey Miller, who owned a hardware store in Canton. The three decided to form a partnership to manufacture the carrier, and called the new firm, Ney, Sherrick & Miller.

The company was later incorporated as the Ney Mfg. Co., at which time Harvey Miller’s brothers and a few others became stockholders, and the product line was expanded to include a number of hardware items.

Jacob Ney, served as superintendent of Ney Mfg. and owned one-fourth of the firm, but for unknown reasons, in 1884 he assigned his entire share to his father, Valentine Ney, and his brother, Valentine L. Ney.

The two Valentine Neys held their share in the firm for a few years but about 1888, they sold out to the Millers.

Ney Mfg. Co. was still in business in the 1950s, but eventually closed down.

The origin of the V.L. Ney Co. is unknown. V.L. Ney was a prominent business man in Canton, building a theater and a golf course, as well as starting at least one housing development.

He must have been Jacob Ney’s brother, but just why he started a hay tool company to compete with the original Ney company is unknown. Possibly, Jacob had an idea for another hay carrier and didn’t want to give it to the Millers.

What is known, is that in 1909, Jacob Ney patented another hay carrier and assigned it to the V.L. Ney Co., although that seems to have been Jacob’s last patent.

Valentine L. Ney received a patent under his own name for a cross-draft hay carrier in 1911, while several subsequent hay carrier patents for the V.L. Ney Co. were by a man named Henry S. Nunamaker.

The two Ney firms must have caused some confusion; in the 1904 Buyer’s Guide the Ney Mfg. Co. calls their hay carrier the “Genuine Ney,” while V.L. Ney lists the “Ney Improved.”

If anyone has any further information on the origins of the V.L. Ney Company, I’d be interested in hearing from them.

Geiss family gets close to nature on relaxing beach vacation