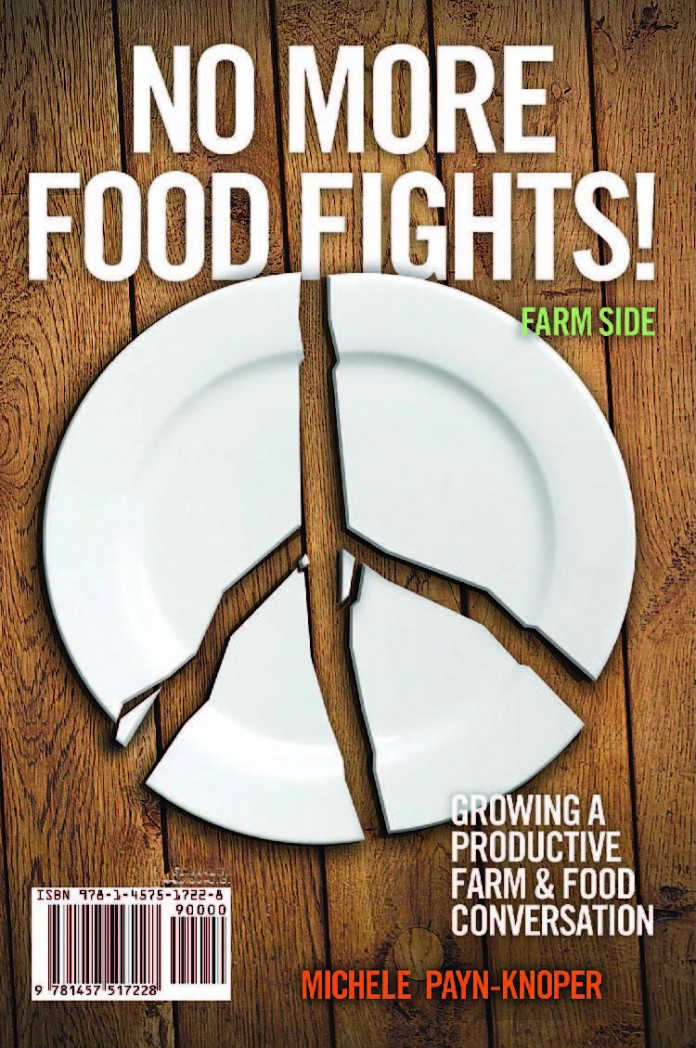 I love the name of Michele Payn-Knoper’s book. No More Food Fights!

While the phrase, “food fight,” does bring to mind the famous John Belushi food-flinging cafeteria scene from Animal House, Payn-Knoper reminds us that while food fights can be entertaining for a short time, “they get rather messy and smell bad when they’ve gone too far.”

And it’s not just literal food fights she’s talking about, it’s food fights about food production, or labeling, or organic vs. conventional production, or small vs. large farms. No one really wins and all it does is create a big mess.

“How about we try to grow the food conversation with civility, seeking connections around the plate?” she writes.

No More Food Fights! Growing a Productive Farm & Food Conversation (scroll down for ordering information) was created to foster conversations about food and food production — without the mayonnaise- or mud-slinging.

Tired of consumers and farmers alike whining the “other side just doesn’t understand,” she wrote the book with both sides in mind. In fact, the book itself serves up the food side from one end of the book, and if you flip it over, you can read the farm side from the other end. The two sides meet, appropriately enough, in the middle.

In each side, she serves up easy ways people can reach out to the other. And a great illustration of the goal is the book’s cover: a photo of a broken dinner plate, cracked into the shape of a peace sign.

(Full disclosure: I wrote a selection that appears in the farm side of the book.)

In her introduction to the book’s farm side, Payn-Knoper asks, “Who is responsible for the voice that will grow understanding between the farm gate and food plate?” After all, she adds to her farm readers, “the conversation is happening with or without you — you decide whether your voice will be at the table.”

I’ve made that observation before, too, and I hope my own farm readers are starting to listen. When you’re silent, when you ignore the conversation, or when you lose control of the narrative, you let others define your own story. And these days, agriculture is as much a war of words as it is a production battle.

“Let’s bring some peace to the plate,” Payn-Knoper writes.

It’s not easy. Every day, I read or hear comments about agriculture that aren’t true of the farmers I know. Every day, my blood pressure rises at the latest claim that farmers are making everyone fat, or that farmers don’t care about their animal’s welfare.

I want to have those conversations, but it turns out I only want the other side to listen, not talk.

It doesn’t work that way. Last time I checked, conversation was a two-way street.

As Payn-Knoper emphasizes in her book, we have to make time to come together around the food plate, to have a conversation — a human connection — that doesn’t end in a food fight.

When we listen to someone’s concerns, and share our own, we build a common ground, a foundation for agreements. Yes, that may mean we agree to disagree, but with civility.

Transparency and engagement can restore trust, and that starts with a face, and a conversation.

Signed copies of No More Food Fights are available at http://www.causematters.com/farmfoodbook/.

Print versions and digital versions (for the iPad, Kindle and Nook) are available at Amazon, Barnes & Noble and other bookstores. List price is $16.47.