Yesterday in the newsroom, three of us gathered around a computer and stared at the design for the front page. There, on the screen, was a big, gaping hole where the main headline should be.

“It’s going to be a tough year,” suggested one.

“‘Tough times’ would be punchier,” said another.

“But we don’t want to be too doom and gloom, especially in the issue going to the masses at the Farm Science Review.”

Back and forth we went, peppering words and phrases at each other like sparring partners. 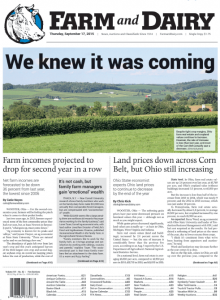 And a Page 1 headline was born.

It doesn’t sugarcoat the rocky road that many farmers are facing right now, but it does remind us that this current trend of low grain and milk prices is nothing new. Or unexpected.

During the Great Recession that started in 2008-09, various nonfarm people occasionally asked me how the ag community was faring.

“Better than most,” I would reply. “They are used to economic cycles, where the average person is not.”

There are short cycles, but the ones worth watching are the long cycles, because they repeat themselves. And you can be skeptical, but ask any grain trader, and they live and die by the charts. By the cycles.

“It’s déjà vu all over again.”

Now, that’s not to say that a spate of unexpected things can’t exacerbate a downturn, namely the weather (hello, spring rains that don’t quit until July). But we shouldn’t be surprised that $7 corn and $17 soybeans didn’t last. Farmers typically expect the unexpected (or they should).

Earlier this year, in one of the market outlooks I was reading, an ag economist called 2015 “one of those getting-by years.” A year when many farmers will be happy just to get by; a year when the cash flow is not going to flow.

It might not flow next year, either, as a predicted $4.20 corn price and $10 soybean price is “relatively optimistic” for 2016.

But we knew it was coming, right?

There are things farm managers can do to “get by” this year, and not stab themselves in the foot for next year at the same time. It’s no secret that I’m a fan of retired Virginia Tech ag economist Dr. David M. Kohl, so I’ll share his wisdom for this point in the cycle, shared earlier this year at an ag lender seminar in Pennsylvania:

(Dairymen will want to tune into the “Dairy Excel” column for those dashboard measurements that are key to dairy operations.)

What we do know with certainty is that, along with death and taxes, what goes up, must come down, and will certainly go up again. And thus the cycle continues.