(This is the second of 12 monthly stories Farm and Dairy is writing to profile a wide range of voices and roles within agriculture.)

ALBANY, Ohio — When Mary Roediger sits in on sheep industry meetings, she introduces herself as, “Hi, I’m Mary, and I don’t have any sheep.”

Well, that’s not entirely true. She does have a small flock of porcelain and stone sheep that she playfully refers to as her “pocket sheep.” Instead, her rural role comes in the form of advocacy for the sheep industry, specifically promoting wool and fiber.

“She plays such an important and critical role,” said Roger High, executive director, Ohio Sheep Improvement Association and Ohio Sheep and Wool Program. Running her own custom sewing business, Sew True Designs, out of her home in Albany, Ohio, she admits she never attempted working with wool until she was asked to be the Ohio Make it With Wool director.

“When Roger first called and told me he wanted me to be Ohio’s Make it With Wool director, I told him he had a wrong number,” she joked. High was just coming on as OSIA executive director and his first order of business was to name a program director. Roediger’s name was the only name given to him.

2015 was a good year for Roediger, being promoted as the National Make it with Wool coordinator, winning the Friend of the Sheep Industry Award from the Ohio Sheep Improvement Association, and having her 4-H clothing project book receive National Peer Review status.

“I kind of joked that I was born with a needle in my hand,” said Roediger. Her love of sewing stemmed from her curiosity of a forbidden sewing machine her mother kept in the basement.

“(My mom) was an excellent seamstress. She could use newspaper and draft her own patterns, however, she taught me nothing, “ Roediger said. “I was not allowed to touch her machine,” which she believes was for safety reasons — it was a treadle machine at the time.

“Of course you tell a kid, don’t touch and then there is an attraction,” she added. She recalls slipping down to the basement when she was just 4 years old and being fascinated with the bobbin winding mechanism that was broken on the machine at the time. Her mother had come downstairs to tend to the laundry and spotted Roediger messing with the machine. “She did not discipline me. She stood there and looked at me and basically turned around and walked away,” she said. Roediger managed to fix the broken part on the machine.

“I went on to do things that you are not supposed to do,” she said. Looking at pictures and seeing dresses she liked in the store, she would make a mental image and come home and sketch out her next project.

“In high school, I always wanted a dress I couldn’t afford.” So she would spend some time taking in the details she liked, sometimes that meant sitting in a dressing room with a sketch pad, but mostly drafting a new pattern from memory when she got home and making it her own.

Roediger grew up in Worthington, Ohio, as the middle child of five. She didn’t live the country life, but she had the opportunity to spend a few summers on her aunt and uncle’s farm, where they raised crops and Arabian horses.

Roediger had the experiences of both worlds. “By living in the city and not on the farm, it’s a whole different atmosphere. You don’t have to rely on each other to do things,” she said. A trip to the end of the drive to take out the garbage was only a few hundred steps and the tiny “postage stamp” that was their yard could be mowed in an hour’s time, “so my mom could do that while we were at school, and dad was at work,” she said.

A trip to the farm was an entirely different atmosphere. “The chore list was enormous, so I had the benefit of seeing both worlds.” When she went on to have her own children, she saw the value in having chores and jobs around the house, so she put her kids to work.

When the master clothing educator program opened up through 4-H in the late ’90s, Roediger said, “Ooh that’s for me.” Through the program, Roediger helped 4-H’ers get introduced to the sewing machine and put together small projects like fleece hats and pillow cases.

The “ah-ha” moments are what really put her job in perspective. “Those are awesome, when they are like ‘oh my gosh’ they get it, and you can almost virtually see the light bulb over their head,” she said.

Mary Roediger of Albany, Ohio, stands with some of her wool projects she has put together over the years. 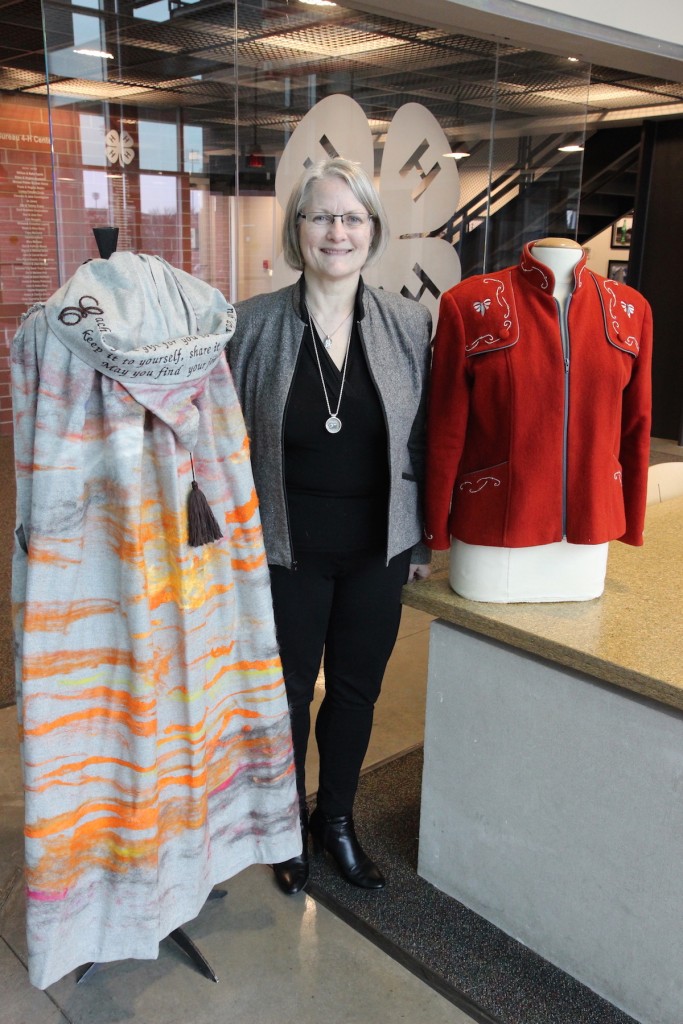 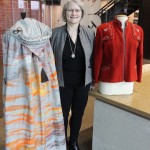 Mary Roediger of Albany, Ohio, stands with some of her wool projects she has put together over the years.
2 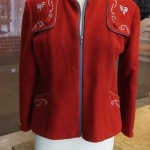 Mary Roediger created this coat for an issue of Sew News Magazine in May 2011. The concept involved using various zipper parts to create the design.
3 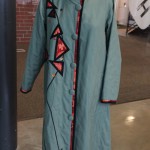 This green army coat was made out of 50 percent wool and 50 percent nomex — a fire-retardant fabric used for pilot suites.
4 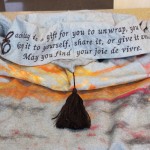 The inspiration for this cape came to Mary Roediger after the mother of one of the 4-H children she had been working with had a heart attack at 30 years old. The mother told Mary how the heart attack made it harder for her to control her body temperature and she had to dress in layers. The felted wool cape is easy to take on and off, features a tassel made from Godiva chocolate bag handles (because dark chocolate is good for the heart), and embroidered on the hood is the quote “Each day is a gift for you to unwrap, you can keep it to yourself, share it or give it away. May you find your joie de vivre” (joy of living).

Part of Roediger’s textile interests came from her travels to Europe while she was growing up. She spent a month exploring Europe with her second oldest brother after attending her oldest brother’s wedding in Denmark. She also attended a summer camp in Switzerland when she was 14, so she could take French lessons.

But each time she visited, she found herself poring over the fabrics and textiles that were like nothing she had seen in America. She became increasingly interested in natural fabrics, like silks, and when she was asked to take on the Ohio Make it With Wool director position, she shifted her gears to learn more about wool.

“The more I look at wool, it is incredible the amount of things that can be done with it, and it’s not your grandma’s wool,” she said. “It’s wool from lightweight, sheer, gauzy, to almost like touching a cloud, to carpets and wall coverings. It’s totally fascinating.”

Traveling to the UK

Now that Roediger has taken on the National Make it with Wool coordinator position, she admits, “It is a little embarrassing that I don’t know much about sheep. I know a lot about working with wool fibers, yarn and fabrics … but very little about the animal it actually comes from.” So Roediger thought what better way to educate herself than to travel with a bunch of Ohio sheep producers to the United Kingdom last fall to see how they raise their flocks.

The first stop on the trip was to a farm in Scotland where lush grass and heather bloomed across the landscape. When they met with the farmer she recalls one of the first things out of his mouth was, “Yeah, we don’t feed our sheep over the winter.” Roediger was baffled by this statement. “Scrape my jaw off the floor, he doesn’t feed his sheep,” she said.

But what she learned is, he meant that the temperate climate allows the grass to grow all year long so they can continue to graze. “So no, he was not depriving his sheep, he was actually being a very smart shepherd,” said Roediger.

Roediger was intrigued by what she learned from the shepherds of the U.K. “It gives me more of an appreciation of what goes into it, and to me it’s astonishing how many fleeces are required to make wool.”

Roediger commented on the ease of raising smaller livestock like sheep and said, while she could easily put a few sheep on her 5 acres at home, she’ll just stick to picking up already-prepared fibers from the local fabric stores.

“Having someone that is a supporter of the industry and its by-products has been great, not only for the sheep industry but is great for ag in general,” said High.

WORLD’S BIGGEST PROBLEM: I have a quote on my door that reads, “You will be amazed at how much good you can do when you stop worrying about who will get the accolades.” People should choose to do what is right, because it is the right thing to do.

SOMEONE MIGHT BE SURPRISED TO KNOW THAT: I am kind of a renaissance because I am interested in so many things. I don’t know that I am good at lot of them.

ON YOUR BUCKET LIST: Win the Powerball so I could have an enormous amount of money to do some good with.

IF I HAD A BUMPER STICKER IT WOULD SAY: “You think you can, sew just go do it.”

FIRST JOB: I mowed grass and had a little lawn care business and a baby-sitting business (and was the most requested baby sitter in the neighborhood).

FAVORITE VACATION SPOT: I can’t answer that because I haven’t been everywhere in the world yet, but I would go back to Europe at the drop of a pin.

Check out other stories in this Rural Roles series:

January: Amish farmer and author shares story of the simple life.
March: Connie Finton volunteers off the farm to build quality of life for her family.
April: Conservation and cattle: Pete Conkle knows them both.
May: Gerards helped give equine trail riders miles of opportunity.
July: Passion for the fair runs deep: Tanya Marty.
August: Tuscarawas County farmer answers the call of his industry
September: It’s all because of the Jersey cow
October: Risky business: Tire repair has its share of dangers
November: Family tradition, trees and rescue