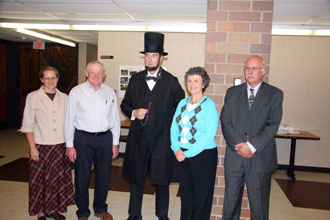 WOOSTER, Ohio — It was fitting that the man who signed the proclamation for the first official Thanksgiving and established the U.S. Department of Agriculture was on hand help celebrate agriculture and conservation at the 2011 Wayne Soil and Water Conservation District annual meeting.

Gerald Payn, Wooster, presented a program as Abraham Lincoln highlighting events that had taken place during Lincoln’s years in the WhiteHouse. Payn has been an Abraham Lincoln presenter since 1999 and is one of almost 200 presenters nationwide.

During the SWCD annual meeting, Virgil and Lois Gasser and family were recognized as the 2011 Conservation Farm Award winners. Virgil and Lois Gasser, along with sons Aaron, Steve, David, Nathan and nephew, Adam, operate a 500 head Holstein dairy farm in Canaan Township and farm 1,400 acres.

The Gassers follow conservation and comprehensive nutrient management plans on their farm.

Conservation practices include a rotation of corn, soybeans, wheat and alfalfa, and crops are planted no-till and mulch-till.

They have installed several grassed waterways on the farm with the most recent being installed in 2008.

In 2009, Gassers installed a 160-foot diameter concrete manure storage tank was installed which provides five months of storage for the main dairy. This was the first circular tank with a ramp installed in Ohio.

Also in 2009, Gassers installed a silage leachate collection system and livestock exclusion practice. Gassers house 340 replacement animals at two separate locations and plans for a new manure storage facility are being finalized with construction to begin in 2012.

This year, the Conservation Education Award was presented to Ray and Allyson Leisy for their work in recycling and environmental issues in Wayne County.

Ray is the Wayne County Juvenile Court Judge and Allyson is the assistant manager for the Gleaner Antique store in Ashland.

Four years ago, they solicited funds for recycling barrels and then began recycling at downtown Wooster events with the help of juveniles from the Juvenile Court.

The Multi-County Waste District awarded its 2009 recycling award to the Juvenile Court for the work on downtown events. Three years ago, Leisys began a recycling program at the Wayne County Fair, and, with the help of other volunteers, have gradually increased the recycling; diverting about 4-5 tons of trash per year from the landfill.

They have also promoted the environment in Sonnenberg Village by establishing a heritage garden (nonpesticide, heirloom plants), a butterfly habitat and a rain garden.

While the Sonnenberg Village is comprised of recycled old buildings, the buildings have a modern touch as recycled products are used on all the buildings, such as eco-slate and eco-shakes used in roofing.

The Wayne Soil and Water Conservation District has also assisted the Sonnenberg Village project with the installation of modern methods of water diversion and conservation practices in the village.

Fred Myers, of Dalton, was re-elected to the Wayne SWCD board of supervisors. Myers and his wife, Cheryl, reside in Sugar Creek Township and farm with their son, Scott, at Woodlyn Acres Farm.