GRAYTOWN, Ohio — The land where Allen Gahler and his family farm has seen a lot of uses over the past five generations.

His family has raised dairy and beef cattle, and experimented with all kinds of specialty crops — popcorn, produce, sugar beets — as well as row crops and forage crops, and some custom farming.

“We’ve grown just about everything,” he said.Gahler, 35, and his extended family have farmed in a three-county region of northwest Ohio since at least his great-great-grandparents’ time.

Today, the focus is row crops and beef cattle, as well as a custom hay and straw business. About eight Gahler family members are involved, and they farm about 1,800 acres and custom farm more than 1,000 additional acres. They also keep 35 head of female beef cows, that are used to breed and sell registered Angus cattle.

Earlier this year, Allen Gahler was named Ohio’s Young Cattleman of the Year by the Ohio Cattlemen’s Association.

Allen manages the beef herd, alongside his cousin, Brice Gahler. The two showed beef cattle in 4-H and when Allen graduated high school in 1996, they found themselves in the beef business.

“It basically developed from 4-H projects,” Allen said. “Our dads were former dairy farmers and grandpa sold the cows right about the time that his boys were all getting out of high school.”

They became a purebred Angus farm in 2002, and have remained committed to that breed. Allen said he finds them easier to manage, and he appreciates the amount of data and resources provided by the state and national Angus associations.

A breed that manages and calves well is important for Gahler, who also works full-time off the farm as an OSU Extension educator. He also is the treasurer for the Ohio Angus Association and is beef superintendent for the Ottawa County Fair.

And, he is a husband, and father of four, including a set of triplets.Young family. Allen is married to Susie Gahler, 31, a fourth-grade teacher for Genoa Area Schools. Their triplets, Addison, Lilly and Griffin (3 1/2) are a little too

young to do most farm work, and that is definitely true of their youngest, Carrie, who is only 1.

But the younger Gahlers are definitely interested in farming — at least a couple of them.

“Their favorite thing to do with (their) daddy is go to the farm,” Susie Gahler said. “They all have their own animal they like.”

Last year, the triplets participated in the pee-wee swine show at the county fair, and they sometimes help mix feed and get the feed pans ready.

Susie did not grow up on a farm, but has learned to appreciate the demands and the evening chores that Allen and his family must do. Most of her chores, however, are indoors teaching fourth graders and taking care of her own kids.

“I herd four kids around and make sure supper’s on the table every night,” she said. “I’m pretty much the person at home who runs the house when he’s (Allen) not here.”

And, that can be a chore of its own.“Four under four is not easy by any means,” she said.

The Gahlers raise and sell about half of the 35 or so calves they produce each year as freezer beef, and the other half are sold as breeding stock — usually bulls. Several of his bulls will be sold at this year’s Ohio Beef Expo.

He is co-chairman of the junior show at the Expo, and will be there for the duration of the three-day event.

Back at the farm, Gahler said it’s rewarding that he works for OSU Extension, because it gives him the flexibility to do farm things throughout the day, and meet with other farmers. There’s a diversity of farms in his area, with many who are row crop farmers, but also some who grow produce and forages.

The heavier clay soils of northwest Ohio are well-suited for forages and wheat production, he said, and the Gahlers see a lot of good production.

As an Extension educator, he’s also up to date on the big issues of the day, including conservation and nutrient management. His farm is located midway between the Maumee and Sandusky Bay of Lake Erie, where nutrient runoff has been a big issue.

In addition to crop rotation, his family has engaged in three major projects through the Natural Resources Conservation Service’s EQIP, known as Environmental Quality Incentives Program.

About 10 years ago, they put in a fertilizer containment structure. They’ve also completed a fencing project, and currently they’re working on a manure storage facility that will be built next spring.

The farm operates somewhat like a co-op, Allen said, with each member keeping his own book records, but sharing resources and farm equipment along the way. Most of the grain for the cattle is bought from the farm, and they keep some of the lower quality hay for the breeding cows.

The cows produce calves in early fall and most everything is kept outdoors, with woodlands and ground cover for shelter. It works good that way, Allen said, although with the extreme cold of the past winter, they did add some grain to supplement the cows’ diets.

Looking ahead, Gahler sees a bright year for the beef industry. Cattle are selling for near-record highs, and feed costs are coming down.“It is a great time to be in the cattle business,” he said.

As cattleman of the year, he’s been invited to spend 10 days in late spring traveling the country as part of the National Cattlemen’s Beef Association Young Cattlemen’s conference. This event includes feedlots, slaughter plants and a visit to Washington, D.C.He expects to see a lot of quality operations and guys who are doing well this year.

“Every segment of the industry has the potential to make money right now, and that has not been the case many times in history,” he said.

While things look profitable, however, Allen said he’s happy to keep the breeding herd at 35 cows. It’s a manageable number, and it’s about as many as his pastures can handle. 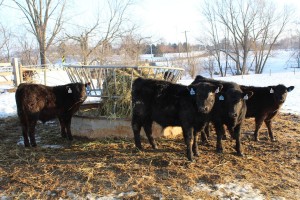 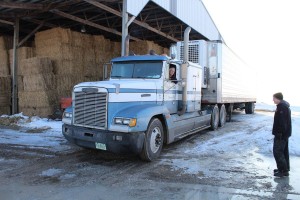 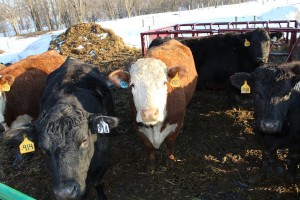 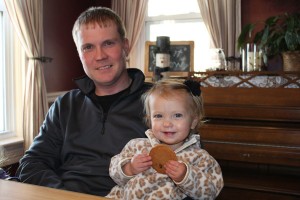