SPENCER, Ohio — For most people, just one bee landing on an arm is enough to induce fear — if not panic. Imagine, if you can, a half-million. That’s about how many Lorain County beekeeper Denzil St. Clair figures he had on him in 2006, when he competed for the Guinness World Book of Records for most bees on one person.

A picture inside his retail shop near Spencer, Ohio, shows him completely covered with layer after layer of swarming bees, as bystanders induced even more bees to land on him.

He stood still for almost two hours, with nearly 73 pounds of bees covering every part of his cloak. Ultimately, he came up a bit short of the record of 87.5 pounds, but the picture and his memory of that day prove that he and his wife, Sheila St. Clair — are true bee people.

To hear Denzil talk about it, you’d think it was just another day. He wasn’t nervous because he had helpers he could trust, and who knew how to handle bees.

“You get accustomed,” he said. “It’s like everything else. Whether you’re shoeing horses or working with cows or whatever, you get used to it.”

The same thing is true about bee stings, he said. There are days when he is stung a couple dozen times. 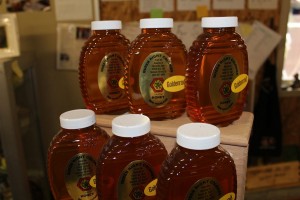 It’s part of the job. But there are places where a sting hurts worse.

“I hate the nose,” he said. “It brings the tears immediately.”

Sheila agrees — the nose is a bad place to be stung.

“We always say the nose will make a grown man cry instantly,” she said.

Other sensitive places are the ears and under the fingernails.

But the St. Clairs don’t get stung as much as one might think. Their experience has helped them learn how to control stings and often avoid them altogether.

“It comes with experience,” Denzil said. “You put a hammer in the hand of some individuals and their thumbs are going to be swollen immediately, but other people, they know how to swing a hammer. That’s the same way with beekeeping or anything else.”

The St. Clairs have a lot of experience in beekeeping — about 43 years to be exact. They’ve operated a retail beekeeper store in Lorain County since 1995 and today are said to be Ohio’s largest supplier of beekeeping supplies.

They manufacture their own line of wooden bee hive boxes and sell popular brands of bee and honey handling equipment. They also sell a couple thousand starter bee packages each year, with about 10,000 bees in each package. In addition, they produce 25,000-30,000 pounds of honey from their own bees. 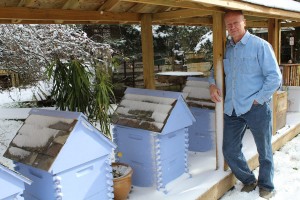 The hive boxes are handcrafted and depending on a customer’s order, they can be painted with an insulating paint or wood preservative, and fitted with a durable slate roof.Balancing act. The St. Clairs got into the retail business 18 years ago so they could purchase equipment for their own operation at a reduced cost. But, they soon found themselves so busy with retail sales, they needed to give up part of their own beekeeping.

“I started with the intent of supplying myself with cheap equipment and cheap bees and in the end of it, I had to give up the beekeeping to run the business,” Denzil said.

The business today is divided among their own beekeeping, plus honey and equipment sales. But all parts work together. 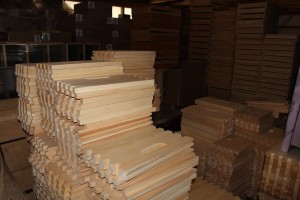 During the busiest season, March through June, the St. Clairs receive help from family and friends, including Denzil’s brother, Berry, who comes from Indiana for a week.

“Family and friends have sustained us in this business since its beginnings,” Sheila said.The St. Clairs have grandchildren who help, too, including one granddaughter, 13, who runs the cash register.

The St. Clairs do not have formal degrees in beekeeping. They joke they went to HKU: The School of Hard Knocks. What they mean is, they’ve learned by doing, and by interacting with other bee producers.

They attend the annual Spring Beekeeping Workshop at the Ohio Agricultural Research and Development Center in Wooster, and they’re active in the local Lorain County Beekeepers Association.

A big trend, Sheila said, is that people want to know where their food comes from, and that it’s a natural, pure product.

“People have come full circle,” she said. “Society has caught on to what they want to ingest and eat.”

The St. Clairs also hold tours at their farm, which consists of about 12 acres and various types of livestock, including some unusual animals like the Asian Zebu cattle, and Racing Homer pigeons. Racing Homers are the kind of pigeons released at weddings and funerals, known for their ability to fly back to their original home.

Other animals include peacocks, turkeys, pygmy goats and the imaginary “Ninja turkey,” which lays gigantic eggs.

But the heart of the tour is the beekeeping operation. The St. Clairs educate tourgoers about honey production and the life-cycle of bees. They hold an annual field day in June that attracts 100-150 participants.

Professional beekeepers use the winter to re-stock supplies. Shoppers use this time of year to find holiday gift ideas — of which the St. Clairs have many. Their retail store is open year-round, except for the days surrounding Christmas and New Year’s Day.