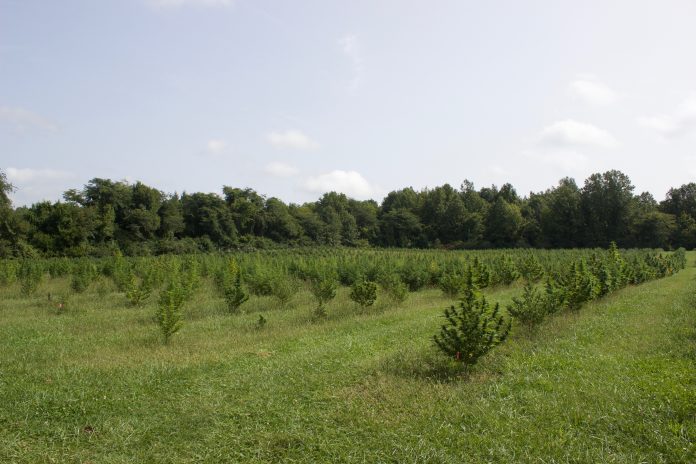 After decades on the controlled substances list, hemp is back as a crop in Ohio. Hemp, like many new crops, comes with new challenges — including limited research.

Researchers at Central State University are trying to address that, starting with a grant-funded research project on manure as a hemp fertilizer, and how it affects soil health and water quality.

“There is a lack of fertility information for the crop,” said Craig Schluttenhofer, research assistant professor of natural products at Central State. “We wanted to address that issue.”

Three hemp farmers, in Clark, Clermont and Lake counties, will be part of the project. They will apply varying amounts of dairy manure on a section of their fields, so researchers can analyze the impacts of different rates of fertilizer.

“The way [Schluttenhofer] designed this was to be as simple as possible,” said TJ Richardson, one of the owners of The Ohio Hemp Company, the Clark County farm involved in the project.

This season, The Ohio Hemp Company will grow 10 acres of hemp outside on its farm. Between half an acre and 1 acre will be dedicated to the research project.

By the end of the two year project, the researchers are hoping to have a rough idea of what rates of different nutrients hemp needs, how fertilizer affects THC and CBD levels and some of the impacts it has on soil health and water quality.

Though it’s only the second year for hemp in the state, this isn’t the first research go-around for Richardson and his partners, Randall and Justin Helt.

Last year, the farm was involved in commercial variety trials for Front Range Biosciences, a company based in Colorado. Out of the 45 varieties Richardson and the Helts grew, 37 of them were for the trial.

The research company, Richardson said, was looking for hemp genetics that are pest, mold and mildew resistant, and stay under the THC level limits. Out of 37 varieties, the research company picked four to commercialize.

That trial fueled The Ohio Hemp Company’s passion for research. Richardson met Schluttenhofer at a conference in 2019. He mentioned that his farm was near Central State and interested in research projects. Now, he’s excited to be part of this new project.

“[Fertilizer] is a very, very hot topic in the hemp world,” Richardson said. “Everybody likes to argue about what to feed plants.”

Schluttenhofer will focus on measuring how the fertilizer affects the metabolites in the plant, including CBD and THC, and mineral nutrients in plant tissue. Hemp growers aim to maximize the amount of CBD in their plants while keeping THC from going over the 0.3% limit.

Schluttenhofer said measuring the plants’ nutrient levels should allow him to work backwards to find out how much the plant needs of different nutrients, like nitrogen, potassium and sulfur. This isn’t the ideal way to find those numbers, but it’s a quick way to get an estimate for multiple nutrients instead of doing individual trials.

“This can give a starting point,” he said.

“One of the keys is organic matter,” Subburayalu said. Other factors he can measure are bug density and infiltration rate.

He added that it is critical to be aware of impacts on soil and water quality, especially in northwest Ohio, where nutrient runoff from farmland has contributed to algal blooms in Lake Erie.

“We have to assess all of those impacts, with hemp being new,” he said. “If we could demonstrate that introducing hemp into a crop rotation … can improve soil health and water quality, I think that would be a win-win for us.”

Richardson came at hemp from a different angle than some farmers. Before starting the farm, he worked in sales and marketing, and in technology. He first got involved with selling CBD about two years ago.

Justin Helt grew up on a family farm, and his father, Randall Helt, owns the farm where they are growing hemp. Justin Helt’s grandfather, Jim Helt, is in the Ohio Department of Agriculture hall of fame.

Richardson and the Helts thought about going into hops, first. They put a lot of time into researching it. But when Ohio and the U.S. as a whole legalized hemp production, they saw an opportunity there. So, they threw themselves into hemp, instead.

Richardson thinks hemp could be a major opportunity for farmers in Ohio down the road, as research and markets develop. He wants his farm to be on the leading edge of research and development. The research opportunities he’s gotten so far are an answer to prayer, he said.

Schluttenhofer said there have been no studies looking at manure application on hemp in the U.S., and limited research in other countries, none of which have looked at dairy manure.

“As the industry expands in that direction, there’s going to be a need for fertility,” he said.

Manure is a common fertilizer for organic systems, he added.

The project received a $150,000 Conservation Innovation Grant from the Ohio Natural Resources Conservation Service. The grant requires a 1:1 match.

Central State is partnering with the Ohio Hemp Association, Open Book Extracts, which is based in North Carolina, and the Ohio Dairy Producers Association, which will provide dairy manure for the project. The researchers are working with growers to finalize locations and get sites licensed for hemp, and getting other details and logistics taken care of for the project.

“We’re just so passionate about … this new opportunity for these farmers,” Richardson said. “This little research thing that we’re doing … really isn’t so little, it’s just one amazing piece of a much bigger, beautiful puzzle.”