SALEM, Ohio — Unseasonably warm weather the first couple weeks of March could end up being a curse for some Ohio produce growers.

March saw a cluster of days reach 70 or higher across the state, with temperatures topping 80 degrees by the middle of the month.

Fruit growers predict their crop to be three-six weeks ahead of schedule, but a night of subfreezing temperatures March 26 could leave some with severe damage — possibly without a crop.

David Patterson of Patterson Fruit Farm in Chesterland, said he recorded a nighttime low of 20 degrees. He protected some of his peach and apple trees through winter irrigation, which caused the trees to freeze and actually creates heat during the freezing process.

But Patterson said it only provides about three-four degrees of increased warmth, and he was still waiting for the ice on the trees to melt before knowing for sure if it worked.

“It will take about 24 hours to really see some dead tissue to show up,” he said, something he hopes not to find.

Doug Woolf of Morning Dew Orchards near Salem, said his family has been growing produce at least 60 years and has never seen anything quite so severe.

Early predictions were not good, especially for his peaches and plums.

“Honestly, we could lose everything,” he predicted.

Woolf said his family farms about 40 acres of produce — too much to justify using irrigation protection. He pointed out that freezing temperatures could still return through the end of March and into April — posing the same threat as they did this week.

Average low temperatures for April are above freezing, according to the weather channel, but lows in the teens have been recorded.

Woolf said he doesn’t buy insurance for the crop because the kind of weather we’ve had this year is nearly unseen in Ohio — and he’s better off taking his chances.

Lisa Schacht, president of Ohio Produce Growers and Marketers Association, said a lot will depend on the temperature each grower experienced, and his own production practices.

Like Patterson, she said applying water is not a guarantee of protection — especially when temperatures get as low as they did.

“Even if you apply water it’s hard to protect it,” she said.

The Schachts sell produce in Canal Winchester and buy their tree fruit from a producer in southern Ohio. Lisa Schacht said her producer was still assessing potential damage, but expected the apples in that region to be OK, because the temperature just missed being cold enough to cause damage.

Even though the spring season is ahead, she expects most growers will “play it cautious” when it comes to early planting. Some vegetables can tolerate cold weather, she said, while others cannot and could be a total loss.

“It’s too high value to take that chance,” she said. “They’re not going to stick their necks out that far.”

Because some produce is ahead of schedule, it could also be an interesting situation come harvest season. We could see a typical season or a season where the produce comes on early, or all at once.

The early spring follows a year of record rainfall in Ohio and Schacht said it wouldn’t surprise her to see “extreme” weather continue.

“One extreme follows another extreme. We keep looking for that next extreme with bated breath.” 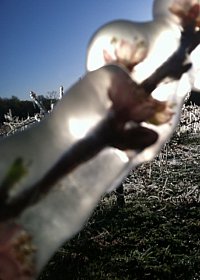