LISBON, Ohio — The nearly 170-year-old Columbiana County Fair has plenty to celebrate as it prepares for the 2014 fair.

The Green Family Trust, of Canfield, has made a $300,000 donation to advance the $900,000 fairgrounds capital campaign and $750,000 grandstand renovation project announced in November.

The existing grandstand was demolished Dec. 14 and fair officials hope to have the new 2,500-seat stands in place for this year’s fair.

The Green Family Trust is donating $300,000 to name the new grandstand at the fairgrounds for the late Arnold C. Green, a local businessman who always had an interest in harness racing and both Standardbred and Thoroughbred racing. 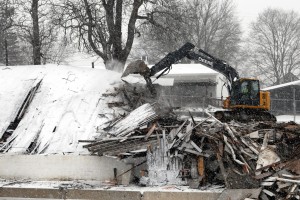 “It is with very fond memories of the fair and my grandfather that the trust makes a gift at this level,” Green said.

“My grandparents were tragically killed in an auto accident over 17 years ago, and this partnership with the fair will keep their name alive.”

Arnold Green was a lifelong resident of Columbiana County, and served as an executive engineering consultant for the Culligan Corporation, of Northbrook, Ill. In 1946, with his father, Charles S. Green, he became one of the first Culligan water franchisees in Ohio, ultimately operating multiple locations.

“This is the largest gift that we know of in fair history, and we are incredibly grateful to the Green Family Trust,” said John Wolf, Columbiana County Fair board president. “Mr. Green’s memories of the fair and his grandfather are the stuff dreams are made of.”

First National Bank of Salem authorized a loan that will allow the project to move forward while the funds are being pledged.

“We are a community-based bank right here in the area, and when approached with the project, it did not take us long to figure out the fair is all about the community,” said Mark Witmer, president and CEO of First National Bank.

Construction is slated to begin in March on the grandstand, and this year’s fair is scheduled for July 28 through Aug. 3.

The project continues to seek gifts from the community, according to director Robin Houlette. “We still have a long way to go toward reaching the $900,000 budget cost.”

Community members interested in contributing to the grandstand project are asked to visit www.columbianacountyfair.org or call the fair office at 330-424-5531.