“The Brown Swiss cow can milk,” declared David Wallace, executive secretary of the Brown Swiss Cattle Breeders’ Association of the USA, during the group’s annual meeting June 26. The association’s national convention and sale ran June 24-27 in Canonsburg, Pennsylvania, with approximately 200 people attending. (Scroll to the bottom to see photos from the event.)

Current president Lee Barber Jr., of DeWitt, Iowa, agrees. He got his first Brown Swiss heifer as an FFA’er in 1958. Since then, he says, the breed has made genetic strides in milk production.

“You just bred to get more milk out of your cows,” he explained.

Barber said the butterfat and protein components of the Brown Swiss milk are a draw for other dairymen, and there’s greater demand for the cattle, often for crossbreeding. But, he added, the limiting factor is the smaller number of cows available.

“The interest is there, but the numbers aren’t there to supply the interest.”

In Butler County, Pennsylvania, Jeff Kennedy is the fourth generation to milk Brown Swiss, and his son Jordan, is the fifth. The Swiss is a hardy cow, known for its feet and legs, he said, but adds, “they’re milk cows now.”

“I think we’re on the right track,” said Kennedy, who also serves on the national board of directors.

And Ohio Swiss breeders Ron and Renee Michalovich, of Lakeville, are raising some of the breed’s top producers. They received individual cow awards for the highest 305-day milk and fat production, on at 305-day test, milking twice a day. Their 4-year-old cow, RNR Supreme Janna, produced 42,410 pounds of milk; 2,870 pounds of fat at 6.8 percent; and 1,361 pounds protein, at 3.2 percent. 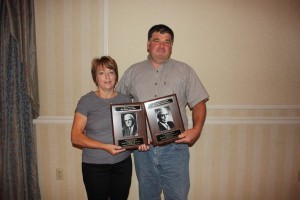 The cow also received the breed’s top energy correct milk award, with an ECM of 60,834 pounds. 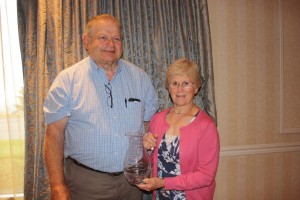 Also recognizing type and production was the NASCO Cow for all Seasons award, which went to IE Champion View Vigor, owned by JoBo Holstein Farm, Gettysburg, Pennsylvania. The 4-year-old was the first-place component merit cow at the Eastern National, and produced 40,640 pounds milk (3x); 1,381 pounds fat and 1,313 pounds protein.

Richard and Donna Hill, Hill’s Valley Farm, Cattaraugus, New York, received the Master Breeder award from the Brown Swiss Historical Society. The Hills have been premier breeder at the New York State Fair at least 15 times; premier breeder and exhibitor at the Eastern National twice, and at the Southeast National in 2011.

A well-known dairy judge, Richard Hill served on the national Brown Swiss association board, and as vice president two years.

The historical society also recognized the late Orbec Sherry (1896-1988), Vernon Stock Farm, Viroqua, Wisconsin, with its Master Breeder award. Sherry, one of the Dairy Shrine’s Pioneer Breeders, is best known as the breeder of Jane of Vernon, who was the grand champion for five consecutive years at the National Dairy Cattle Congress (predecessor of the World Dairy Expo).

Dubbed “The Mother of the Brown Swiss Breed,” Jane of Vernon was 16 at the time of her death in 1945, and almost all Brown Swiss cattle alive today can be traced to this cow’s two sons or six daughters.

During the annual meeting, members were updated on Progressive Sires, which had previously been under the Brown Swiss Enterprises umbrella but managed independently by volunteers. The sire program is now being managed by the association and no longer requires paid membership to nominate bulls, or to purchase semen through the program.

Executive Secretary David Wallace said the association is regaining its financial stability, and has been in the black the last four years.

“We’re still not on what I call a solid foundation, but we’re building one,” Wallace said.

The association has agreements to provide classification to other colored breeds, including Ayrshire and Guernsey, which creates a new income stream. Members discussed new type standards, while maintaining the breed’s dairy strength and width.

David Gunter, Conway, Missouri, and Richard Sparrow, Owenton, Kentucky, were each re-elected to a second three-year term on the board. Phil Heck, Freeport, Illinois, was also elected to the board.