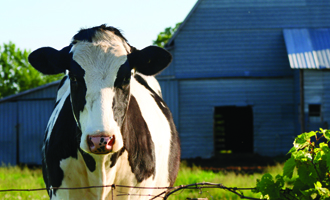 WOOSTER, Ohio — Here’s a quick feedlot riddle: They’re tiny, relatively easy to control and can affect cattle health, performance and carcass quality in a serious way. What are they? Parasites.

“Deworming is one of the oldest technologies we have access to from an animal health standpoint and is still one of the most economically impactful,” says Mitch Blanding, senior veterinarian with Pfizer Animal Health.

He cites an Iowa State University study that says it’s worth $24 per head, just at the stocker segment of the industry.

Decades ago, the industry embraced the practice for its performance advantages on grass and going into the feedlot, but more recently, researchers have found deworming boosts health and marbling, too.

“By definition a parasite benefits from the detriment of the host…some suck blood, some simply live on the nutrients that flow through the digestive tract,” says Chris Reinhardt, Kansas State University feedlot specialist. “Internal parasites steal nutrients that would be available to the animal, but potentially more important is the fact that they damage the very cells and tissues we rely on for nutrient absorption.”

So, it’s no surprise that work at Oklahoma State University points to the positive relationship between deworming and higher carcass quality.

“Marbling, just like other fat stores, can only be deposited when there are nutrients in excess,” he says. That study of 734 steers showed the control group had a 26% drop in Choice grading cattle, along with a 79-pound (lb.) decrease in hot carcass weight, compared to their treated counterparts. There was also a dramatic impact on health: non-treated cattle were four times more likely to get sick or die in the feedlot. “The immune system is a finite thing,” Blanding says. “If the immune system is being occupied and directing its response toward internal parasites, it’s less capable of dealing with the organisms that cause respiratory disease.” Disease and parasites. The theory is the body treats parasites and disease in the same way, Reinhardt says. “A heavy parasite burden steals resources from immune response that the animal could marshal against respiratory infection,” he explains. “If we’ve got high-quality-grading genetics, we’ve got to prevent those cattle from getting sick. A big portion of that is deworming, early and often, prior to feedlot arrivals.”

In an estimated 10% to 20% of the U.S. cattle population most at risk for heavy infestation–mainly those coming off grass in the Southeast–the effects are “very dramatic,” Reinhardt says.

“But even in those more intensively managed cattle, that have been preconditioned, deworming is still going to give me a cost-effective return on investment,” he says. “It still matters but it’s not going to affect quality grade as much as those calves coming straight off pasture. The effect is proportional to the exposure and the type of cattle you’re dealing with.”

An Idaho commercial feedlot study proves that. More than 6,000 yearlings on northern California range were split in half and either dewormed upon arrival or not. Treatment increased hot carcass weight by 16 pounds and improved Choice and Prime by 6%.

In today’s feeding environment, every little bit adds up and helps offset the investment in feeder calves, Reinhardt says. “If I can find a way to get $50 more out of every animal I sell, either through Certified Angus Beef or some other value-added market, if I can maintain the same up-front costs, but get more dollars out the back door, either through more pounds or extra quality, or both, that’s truly a win for the industry,” he says.